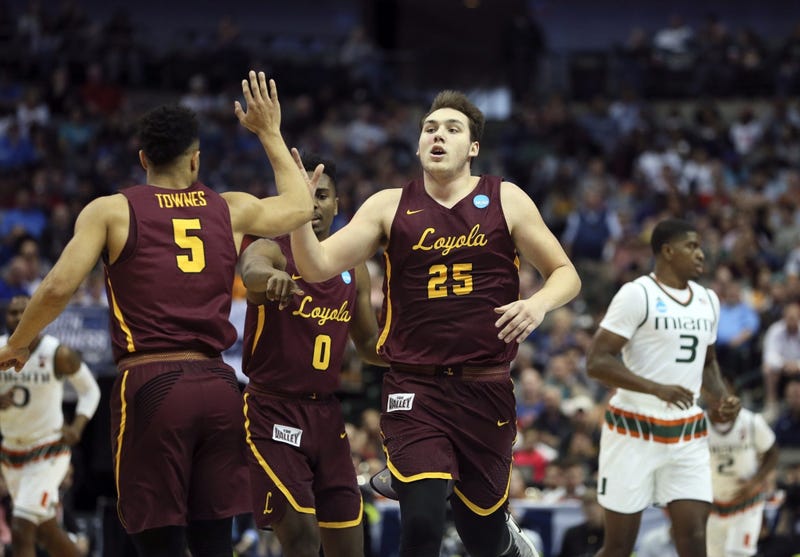 Photo credit Ramblers center Cameron Krutwig (25) celebrates with guard Marques Townes (5) during the first half against the Miami (Fl) Hurricanes in the first round of the 2018 NCAA Tournament at American Airlines Center. (Tim Heitman-USA TODAY Sports)
By Bernie Tafoya, WBBM Newsradio 780 AM & 105.9 FM

CHICAGO (WBBM NEWSRADIO) -- An Illinois state lawmaker thinks college athletes ought to be able to be compensated with cash and he’s proposed a new law to allow it.

State representative Chris Welch’s bill would allow college athletes to make money off their likenesses. They’d be allowed to make product endorsements while they’re still in school playing their sports.

They would not be allowed to be paid salaries by their schools.

"There’s big money here. Here locally, look at Loyola just two years ago when they went to the Final Four. Those kids’ likenesses were everywhere and Sister Jean is a whole other story and they didn’t profit one cent off their own names and likenesses," he said.

State Representative Welch said his proposal is identical to one signed into law Monday in California.

He said it’s about fairness and equity.

The NCAA said it’s considering what it’s next steps will be given that its current rules forbid student-athletes from benefiting financially.