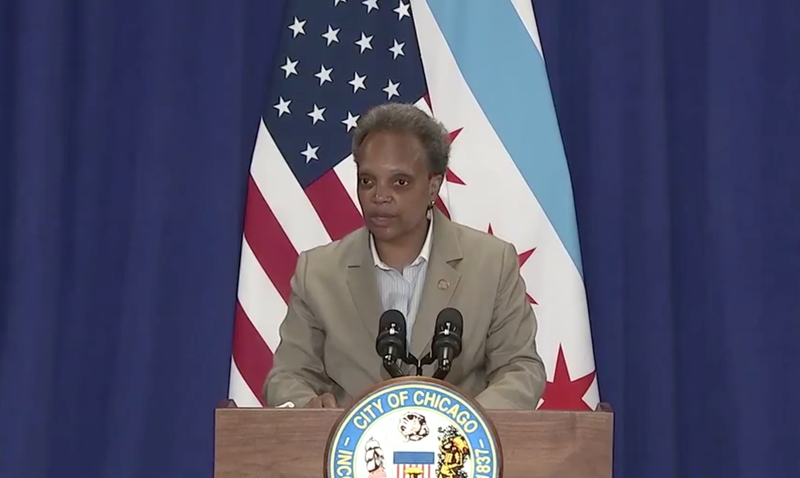 "We are all here today to announce Chicago's latest steps on the road to police reform. This is a road that began more than four years ago when I was president of the Police Accountability Task Force and president of the Chicago Police Board. As continued with new strength and commitment in the 12 months since I became mayor and advances now with today' announcement and the moment we are in. As part of our commitment with working with police and community leaders, local advocates and public safety experts, I am proud to announce the launch of the Chicago Police Department's Use of Force Community Working Group."

The Mayor said the group will have 21 diverse community members - ranging from residents, students, experts, lawyers, advocates and elected officials - who will review and revise all of CPD's use of force policies.

She said the process of forming the group began earlier this year, as part of the city's consent decree effort, and was built in collaboration with CPD and community coalition for the consent decree, "to reflect both the full diversity of our city and the lived experiences of communities most impacted by these issues. It will be co-chaired by Ms. Winters and CPD Deputy Chief Cato."

Meanwhile, Lightfoot said, members of CPD's Research and Development and Training divisions will be providing overviews of the policies and making themselves available to the working group members, to ask questions or to obtain clarity. Once the group's work is complete, they will send their recommendations to the executive steering committee for review and comment.

"Ultimately our goal is simple: create better policies and better training for our officers in order to empower them to address situations appropriately and to prevent incidents stemming from excessive force in the future. And the best way to do that is by making sure that the community has a seat at the table, at the beginning of this process, and that everything we do reflects the community's interest and needs," Lightfoot said.

The Mayor reminded the public about the Use of Force dashboard the city created earlier this year to provide the public with data on use of force incidents over the last five years.

"As I mentioned earlier, this effort is simply the latest step on our road to reform that began over four years ago. A mission we have doubled down on since I became mayor. And a mission that has only accelerated since the murder of George Floyd and accelerated further here in light of what happened last week at Congressman Bobby Rush's office. As I said last week, that means taking the FOP head on and ensuring the police union contract represents our city's values — all of our city's values. And requiring licensing for police officers once and for all, just as we do with so many other professions.

"And there are a lot of other important discussions happening across the nation on police reform. And I truly believe that we as a city have a lot to that national narrative, because so much of what we are hearing has already gotten started right here in Chicago. We have taken steps to make sure our officers are crisis intervention team trained, that our officers are equipped with body-worn cameras, that de-escalation is a part of regular training, not just for new recruits, and that list is long and goes on. These are measures that came about as a result of the righteous outrage that arose in response to the murder of Laquan McDonald by police officer Jason Van Dyke, which led to serious and important steps in building the trust between our police and communities - that is the cornerstone of our vision for public safety in Chicago," Lightfoot said.

"Police officers can never do this alone. We will only have true public safety when the community is engaged and involved in charting the course of public safety on a neighborhood-by-neighborhood basis. As we move forward, the steps we will be taking on our road to reform will continue to build not only on the police accountability task force recommendations, but on the consent decree as well. I truly believe that the consent decree gives us a unique opportunity, maybe a once-in-a-generation opportunity, to transform everything about policing in Chicago. These steps that we will take also include bringing the community into the police academy as teachers, providing district training on neighborhood history from the community's own perspective, so that officers who work in a particular district have cultural literacy about the rich nuance history of a particular area; expanding programs that provide youth-led neighborhood exposure and education like we've seen with My Block, My Hood, My City tours, as well as reforms to improve officer wellness, mandating crisis intervention and procedural justice training, delivering additional de-escalation tools for officers and community members and undergoing a new recruit program on police community relations and community policing. We need to make all of these things real and meaningful and substantive, and we will," the Mayor said.

"And as I told Superintendent Brown and the entire City of Chicago, I want to see some of these specific measures implemented within 90 days. Our city needs us and our people are rightfully demanding it. It is our job as public servants to get this done and see it through, and we will do exactly that."

Comprised of community leaders, activists and police officers from across Chicago, the new Use of Force Working Group will convene in partnership with CPD over the summer to provide feedback, revisions, and formal recommendations to the police department to adopt under a new use of force policy. To ensure the health and safety of all participants during the COVID-19 pandemic, the working group will virtually convene via video teleconference over the next eight weeks, the Mayor said.

Chicago Police Superintendent David Brown said "to the people of Chicago, we hear you."

Brown said the Chicago Police Department has been at every protest throughout the city since the tragic death of George Floyd in Minnesota.

"We have been there to keep people safe as they exercise their First Amendment rights. We have been their to protect businesses and property from those who use this time of civil unrest as a license to steal and vandalize our beautiful city. We have also been listening. CPD has heard the loud cries demanding police reform. We have heard from people who are hurt, angry, and afraid. There is a roadmap to police reform already in existence for Chicago. This consent decree spells out a series of mandatory improvements that are being overseen by a federal judge. These reforms were created with input from Chicago residents across the city, as well as from our own officers, who demanded better training, supervision and mental health support."

"While these statistics are encouraging, we must do more to ensure that the voices of our neighbors and residents are being heard when it comes to developing policies that guide when and how we use force to keep Chicagoans safe," Brown said.

Monday's launch of the Use of Force Working Group follows community conversations held across Chicago in February to receive input from the general public on a series of policies and procedures, including use of force, community policing strategies, mental health, and body-worn cameras. Consisting entirely of volunteer members, the department composed a diverse group of community members with different levels of expertise and lived experiences who are all committed to providing recommendations for CPD’s use of force polices.

"As co-chair of the use of force working group, I plan to listen to the voices in the room and respect their skill sets, knowledge, wisdom, expertise, trauma, mistrust, trepidations, truths, ideas and rationale," said Arewa Karen Winters from Justice for Families, who will co-chair the Use of Force Working Group alongside CPD Area 4 Deputy Chief Ernest Cato III. "I want to prove that it can be done with the right chemistry and authentic buy in from the Coalition, City and CPD."

In addition to the community members, the working group will also be supported by Rae Kyritsi from the Center for Conflict Resolution who will serve as a neutral facilitator, Michael Dirden, Esq. who will serve as an Independent Subject Matter (Policing) Expert and Marcia Thompson, Esq as a Technical Advisor, both from Hillard Heintze. Further, four current law students will also serve as neutral notetakers during each working group meeting.

"We know the value of these conversations, and we know the appropriate use of force is more than just a policy," said Deputy Superintendent Barbara West, who oversees CPD’s Office of Constitutional Policing and Reform. "The concepts of sanctity of life and de-escalation serve as the cornerstones of our use of force policies, and we must never stray away from these core principles."

Over the past several weeks, Mayor Lightfoot and Supt. Brown have doubled down on reform efforts with new measures that will be implemented in the next 90 days, including crisis intervention and procedural justice training, a new recruit program on police-community relations, a real officer wellness program and additional reform measures. Residents can find the latest information on the CPD’s reform efforts at: chicagopolice.org/reform