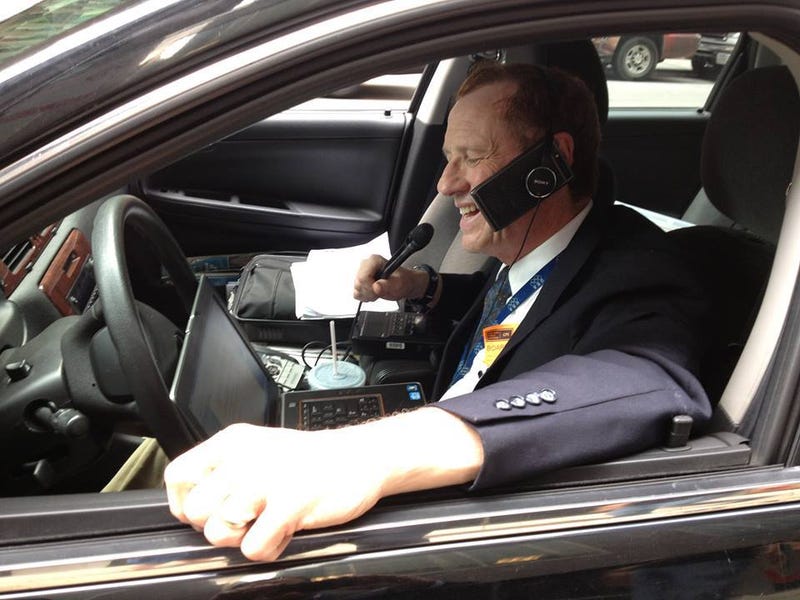 CHICAGO (WBBM NEWSRADIO) -- One of Chicago's best-known broadcast journalists, Bob Roberts, announced earlier this year that he will be retiring as a reporter from WBBM Newsradio. His last day at the station is today.

Ron Gleason, director of news and programming at WBBM Newsradio, called Roberts “one of Chicago’s best reporters” and “an invaluable member of our team thanks to his tremendous knowledge of the Chicago area and its transit system. He’s second to none during breaking news situations.”

Roberts, whose given name is Robert Rodenkirk, started out at his high school newspaper and then worked at the radio station at college.

"By the age of six, I knew I wanted to be a reporter. Radio became the medium when I was a freshman at Indiana University, but it took four years of college radio here and three at Northwestern, while working for the legendary City News Bureau, to get my break at Top 40 station WMET and suburban rocker WYEN before being hired for the first of two times at WMAQ Radio, a time during which I was a marathon-distance runner. An assignment covering the marathon took a radical turn when, instead of providing a few sound bites, I filed a 7:45 feature that aired once, but won national awards and prompted a college student named Jeff Joniak to pursue a career covering sports. Excuse the thin voice; I'd just run 26.2 miles."

"I worked for WMAQ the first time from 1978 until 1984, covering everything from the marathon and the Indy 500 to the John Wayne Gacy case, which I followed from the time it was a missing persons case involving the disappearance of teenager Robert Piest, Gacy's last victim. I moved to New York in 1984 for a four-year run at 1010 WINS radio, where I did everything on air -- news and sports, reporter and anchor. That versatility won me a front-seat view of the famed Cyclone roller coaster's 60th birthday run."

"I couldn't wait to return to Chicago, and WMAQ granted my wish just in time for the 1988 St. Patrick's Day parade."

"I was brought up in a strong family tradition. The eldest of five children, I've been married for 18 years to teacher (and former Chicago broadcaster) Jackie Bresse-Rodenkirk.  My parents were married for 61 years before they died seven months apart. Even I had to ask them what makes love last so long, a story which won an AP broadcast award."

"Jackie and I have that same strong bond as my parents, but she brought something into our marriage I'd never experienced: a dog. His name was Gilbert, and his on-air obituary won another AP broadcast award."

"While I've covered every form of hard news, from murders and fires to politics Chicago-style, and even had my life threatened, I've always rejoiced in the positive features.  WBBM Newsradio has been the home to many great storytellers in its 51 years as an all-news station. I can only hope that the great John Cody approves."

"The mind is willing, but the body says it's time for a break. I've had shout-outs since announcing my decision to retire from all over, ranging from Gov. J.B. Pritzker to Muscatine, Iowa broadcaster Tim Scott, who has never met me, but has followed my career over the years and called the other day. We spoke for 20 minutes and now I have a new friend in this crazy business that's called radio news. No matter where you're listening to or reading this, thank you from the bottom of my heart. There's magic in the radio and it's there for you to hear, 24 hours a day, seven days a week.

"It's been a long and often wild ride since my first phone call at the age of six on a news story, the Our Lady of the Angels fire of 1958, one which I have revisited many times over my career that still leaves me that raw and disbelieving boy."

A FAREWELL, OF SORTS

Yes, it’s true. I am retiring. It’s time to take a step back, get some needed rest, sharpen my Zumba moves and do more than think about the book I’ve contemplated. Freelance work is out there and I have people rooting for me.
Today I’ve heard from hundreds of people — grade school and high school classmates (Champion Ramblers; football brothers forever), friends from my seven years of college radio (“Animal House” reference: not “down the drain”) and every stop since. I have heard from desk assistants and the chief operating officer of my employer, Entercom. I have heard from local TV and radio competitors, from CBS and NPR correspondents and from people whose stories I have covered, including a truly great and inspirational clergyman who fights every day for a better neighborhood and a violence-free Chicago, Father Michael Pfleger, whose prayers I seek. I have even heard several times from the man who, as a teenager, first found me a place to call home on the commercial side of the dial. (Thank you, Jim. I think…)
Not bad for a kid who aspired to be a motorman on the North Shore Line (it died in 1963) or a sportswriter (unfortunately, a dying breed).
Only one person is missing, and that’s the man who, as news director of 1010 WINS in New York, made a leap of fate when handed my demo cassette as I was being RIFed at WMAQ in 1983 with three words of advice from one of his senior reporters: hire this guy (and then had me break in with an anchor who had turned me down for a job as a news director in Louisville two years earlier). The missing guy, of course, is Scott Herman, and I owe 35 years of my career to him. Scotty, thank you from the bottom of my heart. I hope I justified your decision to make me a reporter (dream job) as well as a repeat…er, anchor time and again.
Catch me while you can on WBBM; my last day is April 16. But keep listening to your radios. You never know when or where I may pop up after that. Odds are that my outcue will be from South Carolina, where my beautiful school librarian wife awaits me impatiently. That’s a good thing.
Finally, while I may have CBS running through my veins, I don’t dare quote Murrow. I am not worthy. Instead, in the words of the immortal Ted Baxter, “Good night, and good news.” It’s truly been a great ride.