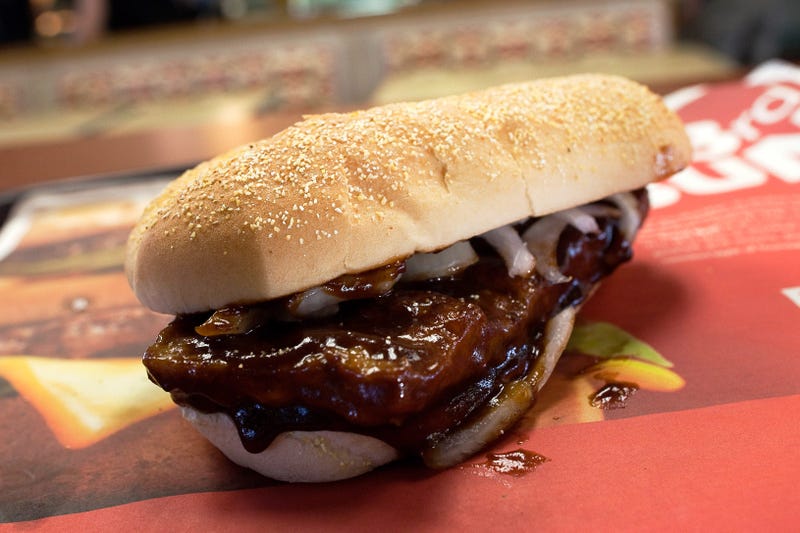 (WBBM NEWSRADIO) – The famous McRib sandwich is back in McDonald’s restaurants, but why isn’t it on the menu all the time?

“People get bored with the same thing, especially in a fast-food restaurant where those items are consistently the same. People want something a little different,” analyst Phil Lempert of The Supermarket Guru told the Noon Business Hour on Tuesday.

In a similar vein, Starbucks rolls out its pumpkin-spice drink around autumn. And McDonald’s has Shamrock Shakes around St. Patrick’s Day.

It gives fans a reason to come back to the restaurants  -- sometimes several times for that item.

As for the McRib, Lempert said fluctuating pork prices impacts what McDonald’s has to charge for the sandwich. This season, though, enthusiasts should get a good deal, he said.

It hopefully goes without saying that the McRib is not really a rack of ribs, but rather a molded patty made from pork ingredients and flavorings. The website Taste offers this description of what's inside:

According to McDonald’s, McRibs are primarily made of ground boneless pork shoulder emulsified with water, spices, dextrose sugar, and preservatives to refine its flavor and texture. The meat’s smoky flavor comes from liquid smoke, a benign distillate of smoky vapor, rather than anything approaching low-and-slow barbecue ...