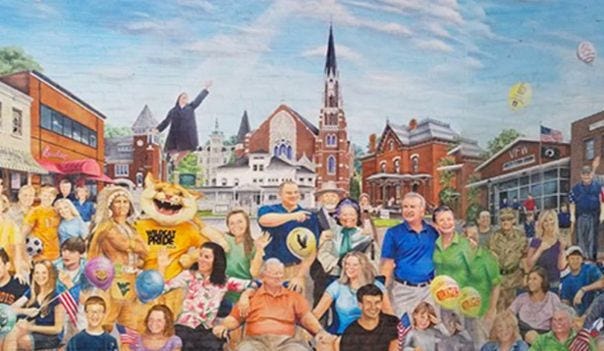 Photo credit A section of the "Naperville Loves a Parade" mural in the western suburb. (Centurywalk.org)
By Rachel Pierson, WBBM Newsradio 780 AM & 105.9 FM

(WBBM NEWSRADIO) — A public-art display in west suburban Naperville is drawing backlash for not being inclusive enough.

The 132-foot mural "Naperville Loves a Parade" was commissioned in 2014 and features dozens of faces and several local businesses. But only a handful of people in the work are minorities.

He notes that part of the problem is people had to donate to the Century Walk project to be featured in the mural. He said that may have discouraged participation by minorities.

Criticism about the mural has gotten more traction in the wake of George Floyd’s death. An online petition to have the mural revamped to include more diversity has gathered over 45,000 signatures.

“The great thing about Naperville is oftentimes we recognize when we have a challenge, we have things that we’ve got to improve upon and we step up to the plate and we do that,” he said.