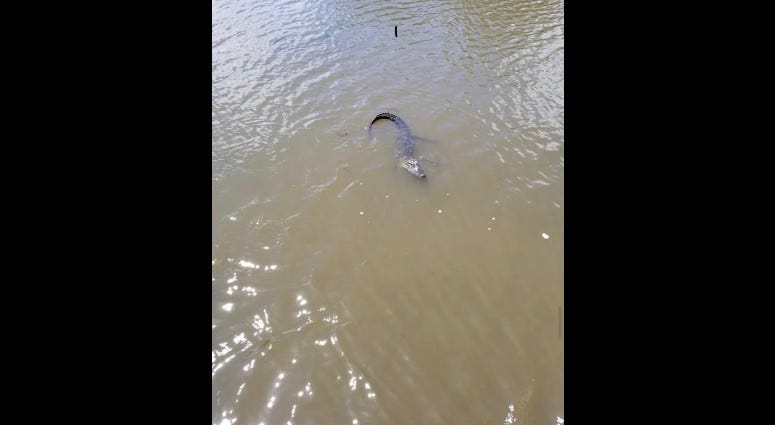 LYNWOOD, Ill. (WBBM NEWSRADIO) -- Lynwood police and firefighters are attempting to catch a small alligator that was spotted in a small lake surrounded by homes.

The Lynwood Fire Department said on Wednesday afternoon the Lynwood Police and Lynwood Fire departments were called for a sighting of an alligator in Lake Lynwood.

The Lynwood Fire Department posted a picture on Facebook of the roughly 3-foot-long alligator, which is a little smaller than “Chance the Snapper”, the alligator captured in the Humboldt Park Lagoon last year. The department said the alligator is "not an immediate hazard to animals or humans."

RELATED: Woman Jumps Into Gator Pit At Safari North Zoo With Son | One Year Ago, Chicago Had An Alligator Adventure | Alligator Caught In Humboldt Park Lagoon | Chicago Gator Hunt Cost More Than $33,000 | Are Gators Legal As Pets In Illinois? It's Complicated, Expert Says

On Tuesday, some children originally spotted the alligator, and then several other residents also saw it and called officials.

The fire department said it is working with professionals to try and catch animal "quickly and safely."

According to WGN, around 2 p.m. Wednesday, a water rescue team was sent to attempt to capture it. They were unsuccessful in capturing the alligator Wednesday and called it a night at around 8:30 p.m. The team will be back out Thursday to try again.

"We also know that many homes have their backyards on shore of Lake Lynwood and may have concerns," the Lynwood Fire Department wrote on Facebook. "Here is our current advice: if you sight the animal, call 911. Do not attempt to approach the animal nor capture it. As an extra precaution, please keep pets and children away from the lake. Again we are working with professionals to capture the animal as quickly and safely as possible. We will provide updates as the situation progresses."