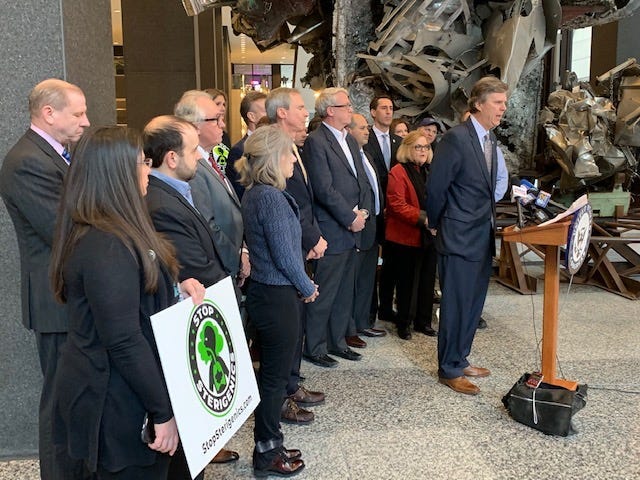 CHICAGO (WBBM NEWSREADIO) -- Governor Pritzker's administration has shut down Sterigenics after community groups in the western suburbs pushed for the Willowbrook plant to close because of concerns over cancer-causing ethylene oxide.

"We're ecstatic that finally our pleas have been answered and Sterigenics is shut down," said Joanna Chlystek, who lives in Darien, close to the plant. "We feel the fight is going to continue on and we're going to continue to work as a community to make sure this doesn't happen to anybody else."

Some residents had accused the Trump administration's EPA of dragging its feet — even after getting air quality test results that showed high levels of cancer-causing ethylene oxide in the area around the medical equipment sterilization plant. A rally was held Feb. 8 to bring attention to the plant's harm and urge the EPA to close the plant. Frank Trilla, mayor of Willowbrook and other residents of the town voiced concern for the plant's health effects on the community.

But the plant is not happy about the Illinois' EPA decision. In a Feb. 15 statement, the company said the decision to suspend operations at the plant are "indefensible."

"Willowbrook has consistently complied with all state permits and regulations and Sterigenics has been in ongoing cooperation with the Illinois EPA and other officials regarding the safe operation of the facility," the statement wrote. "Unilaterally preventing a business that is operating in compliance with all state permits and regulations from carrying out its vital function sets a dangerous precedent. The Illinois EPA’s decision will place the health and lives of thousands of patients who rely on the critical medical products sterilized at Willowbrook at risk."

"We will be analyzing these results closely to understand the cause for such inconsistency from all prior samples taken to date. Sterigenics will comply with the order and will take all legal actions necessary to reverse this decision," the statement said.