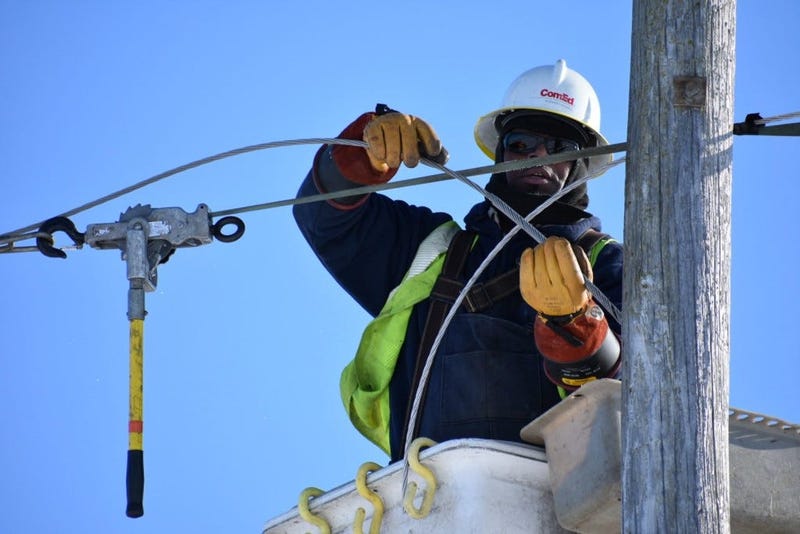 CHICAGO (WBBM NEWSRADIO) -- ComEd’s outage map indicates more than 200,000 homes and businesses remain without electricity and an official said some people may not have their power restored until Saturday afternoon.

At the height of the outages following Monday afternoon's storm and tornadoes left 850,000 homes and businesses without electricity.

Susan Leahy of Orland Park said she has a generator that is powering her refrigerator and a microwave oven. She said ComEd texted her that her power should be back by Saturday afternoon.

ComEd Vice President of External Affairs Rich Negrin said he understands the frustration of people who continue to go without electricity, especially during the pandemic.

"One single person out with power during a critical moment is incredibly frustrated, and for some folks who care a lot about whether they’re working from home or e-learning or rely on medical devices to keep up their health and safety, power is critical and we know that," he said.

He said ComEd is bringing in 1,500 workers utilities on the East Coast to help 800 ComEd crew members restore power.

Negrin said Monday’s storm was especially damaging which is why it’s taking so long to restore electricity. He said this one left structural damage with downed towers and entire sub-stations impacted.

South Holland resident Daryl Russell said he, like many of his neighbors, has a generator to power just a few things.

"I’ve been able to put a deep freezer, the refrigerator, a TV and one fan on it. And my cellphone, obviously," he said.

Russell said his wife usually works from home, but cannot because there's no internet service.