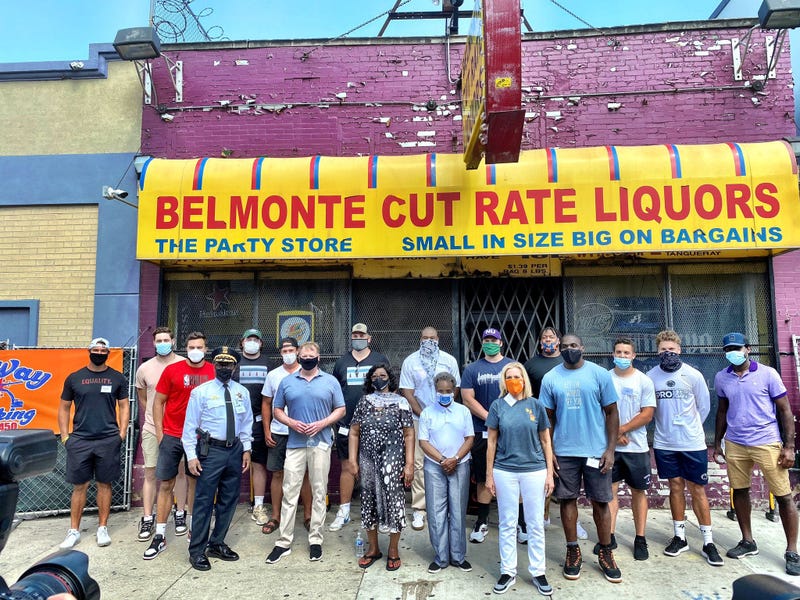 CHICAGO (WBBM NEWSRADIO) -- Current and former professional athletes from Chicago and elsewhere broke ground Tuesday on a new grocery store in the Austin neighborhood on the West Side.

The athletes, lead by former Chicago Bears linebacker Sam Acho, put up $500,000 to buy an old liquor store that is being converted into a grocery store in what is considered a "food desert" in Chicago's Austin neighborhood. The store will be run by non-profit By The Hand, which works with kids.

Former Bears Sam Acho made the announcement on Twitter, reading "This is what change looks like. Just got together pro athletes from the @ChicagoBears @chicagobulls @whitesox @NHLBlackhawks @packers @Panthers and @Saints. We invited @nflcommish and @chicagosmayor. We listened to kids and learned about their dream for a better Chicago."

This is what change looks like. Just got together pro athletes from the @ChicagoBears @chicagobulls @whitesox @NHLBlackhawks @packers @Panthers and @Saints. We invited @nflcommish and @chicagosmayor. We listened to kids and learned about their dream for a better Chicago. pic.twitter.com/sQpnmnPiMj

RELATED: Mayor Lightfoot Pleads With Walmart, Other Retailers To Not Abandon Chicago | New Grocery Store Opens In South Shore After Community Goes 6 Years Without Any

"This is incredible. It is inspiring. It is really wonderful to see what Sam and the other professional athletes are doing," Goodell said. "You can see it in the faces of young kids, how happy they were to have people here believing in them, and supporting them, and investing in them."

Acho told WBBM Newsradio that "the cool thing about about having Roger here, having the Mayor here, the Superintendent of the Chicago Police Department here, and having over 12 athletes from all the different Chicago sports teams and other athletes who are just from Chicago, who are on different teams in the NFL, MLB, etc. is that people care. It's a time for people to show up. I think our world has changed. It's almost like you learn about tectonic plates, and things just shift. Things are not going back to the way they were. So for us to be able to come together and say we are going to lead that change, it means something."

Other athletes include Mitch Trubisky, Jonathan Toews, Jason Heyward, Lucas Giolito, and others. They are partnering with the non-profit By The Hand, which will operate the store.