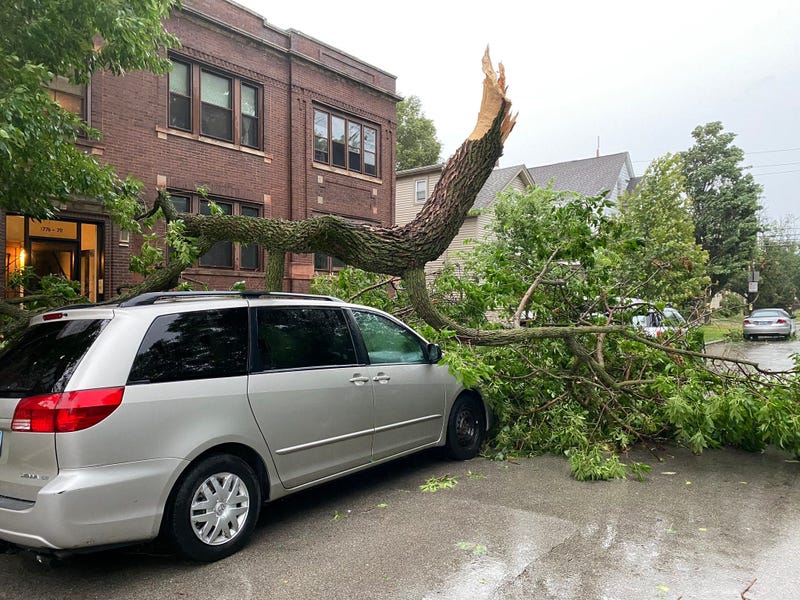 The storm pushed through quickly about 4 p.m., but residual high winds over 60 mph were possible, according to the National Weather Service.

A severe thunderstorm watch was to expire at 7 p.m.

Nearly a half million ComEd customers were affected by power outages Monday afternoon, according to the utility company. About 180,000 of them were in Cook County.

A gust of 72 mph was recorded at Midway International Airport shortly before 4 p.m., the weather service said. O’Hare recorded a gust of 62 mph.

Reports of damage were most heavily reported on the Northwest Side, according to the Chicago Fire Department. Blue Line trains were halted near O’Hare about 5 p.m. while crews worked to clear debris from the tracks.

Firefighters also responded to several fires caused by fallen power lines. One fire in the 1800 block of South Canalport was caused by wind damage to a building under construction. No injuries were reported.

Forecasters warned of widespread damage as the storm approached during the evening rush. The weather service issued a tornado warning that expired 4:30 p.m. in northern Chicago, DuPage and some northern suburbs.

The storm approached Chicago at 50 to 60 mph from Nebraska and Iowa, where at least 350,000 people lost power.

Tuesday and Wednesday call for a slight chance of storms in southern Cook County.