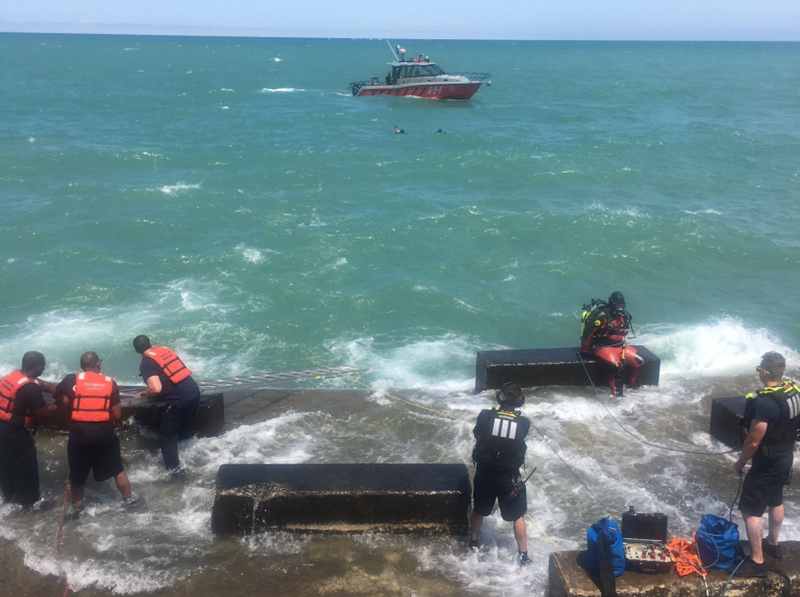 CHICAGO (WBBM NEWSRADIO) -- A swimmer died after going underwater for more than a half hour Thursday afternoon in Lake Michigan, according to the Chicago Fire Department.

The man, about 25 years old, was out with about four friends at Promontory Point when “he said he wanted to jump in the lake for a quick swim,” according to CFD spokesman Larry Langford.

“He struggled and then went under,” according to Langford, who said the rough water was described to him as a “washing machine.”

Victim found getting him out now pic.twitter.com/ZhEITVgaJu

The fire department sent four divers and a helicopter after it was called at 1:03 p.m. to the 5500 block of South Lake Shore Drive, Langford said. They found him at 1:30 p.m. about 10 feet off the rocks.

The man, who was already in cardiac arrest, was taken to the University of Chicago Medical Center where he was pronounced dead a half hour later, he said.

Langford speculated that waves may have pushed the man into the rocks and knocked him unconscious.

Sorry to report. The young man rescued from the lake near 5500 south has expired per the Emergency Department at University of Chicago hospital. CFD estimates he was under the water about 40 to 45 minutes.

Please keep in mind Lake Michigan is turbulant with severe undertow. Beaches are closed and rock walls are especially dangerous to swim near. A CFD rescue diver got out of the water and said it was like a "washing machine" please stay out of the lake.

“Please keep in mind Lake Michigan is turbulent with severe undertow,” the fire department said in on Twitter. “Beaches are closed and rock walls are especially dangerous to swim near.”

So far in 2020, at least 17 other people have drowned in Lake Michigan, according to the Great Lake Surf Project, which tracks drownings.