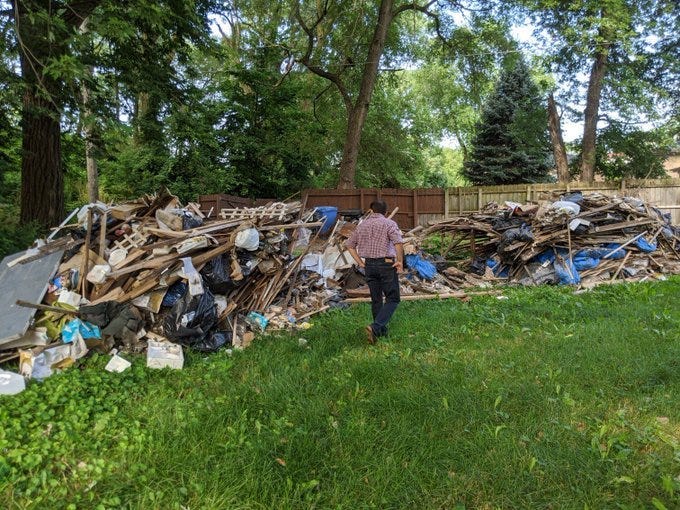 CHICAGO (WBBM NEWSRADIO) -- Illegal dumping has long been a problem in some Chicago neighborhoods.  They come in the night, dump trash, and get out.  But something left behind this week at one empty lot could lead to the culprits.

A Ring doorbell camera caught two men emptying the contents of a dump truck - much of it appearing to be construction debris - in a lot near 58th and Wood in the West Englewood neighborhood overnight Monday into Tuesday.

“You cannot disrespect our neighborhoods and use them as your own personal garbage dumps,” he said. “None of my residents, none of my neighbors deserve to wake up in the morning and find literally tons of garbage dumped right behind their homes.”

Illegal dumping in my ward at around 2am. Looks like an entire dump truck was used. Thankfully we may have some leads as a result of private cameras in the area! I’m sick of the disrespect unscrupulous contractors & waste haulers have for our city!@ChicagoCAPS07 pic.twitter.com/HxjfFs3Bad

I’m sick of this bullshit in my ward and across Chicago. This NOT how you properly dispose of debris/waste. We must enforce our laws, strengthen measures for people remodeling/rehabbing properties, and hold bad waste haulers accountable when they disrespect our communities! pic.twitter.com/Cv4LBRzh3i

Ald. Lopez told CBS 2 some of the garbage had address labels for a building on the Northwest Side that is under construction, and there is a recent building permit.

The city is working on tracking down the owner.

“To find out why exactly their debris from the North Side of Chicago found its way into the South Side – West Englewood,” Lopez said.

Ald. Lopez said cleaning up after illegal dumpers has cost $250,000 over the past year. He said he is serious about making whoever did this pay for it.

Special thanks to our great @StreetsandSan laborers & crews for coming quickly to clean up. I am currently working w/ @ChicagoDOB & the local Ald to identify the associated construction/demolition permits with the address found in the debris. pic.twitter.com/qvPOJIbo79

“This was easily several thousands of taxpayer dollars spent to clean up someone’s private problem,” Lopez said. “I think that person should be held accountable to reimburse the City of Chicago, once we can connect them to this dump.”

According to CBS 2, the dumpers left such a big mess that it took three city trucks to clean it up Tuesday. The city’s minimum for a first-time illegal dumping offense is $1,500.