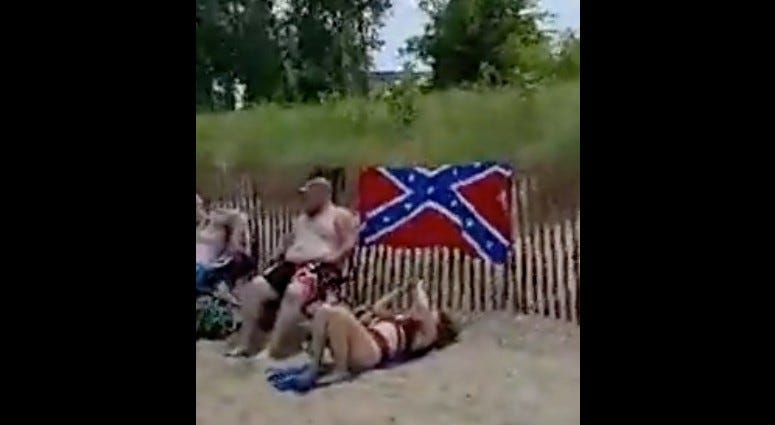 CHICAGO (WBBM NEWSRADIO) -- "That right there is a racist symbol of hate."

LaShandra Smith-Rayfield, a black woman who had heard about a Confederate flag being displayed at an Evanston beach Wednesday afternoon, drove there and confronted the people and posted a video of her exchange on Facebook.

The video now has been seen more than 90,000 times and has prompted a couple of thousand comments. Most of the comments praise Smith-Rayfield, but some people were critical of her and told her she should mind her own business.

Smith-Rayfield indicated on the video she had seen a picture of a Confederate battle flag towel hung on an erosion-prevention fence at Lighthouse Beach in Evanston.

She said she was using her "teacher voice" while standing at least 15 feet from the people who had hung the flag.

"That flag right there is my swastika. You put it up on this beach and yes, I'm going to come out every freakin' time to tell you they lost the damn war. This is the United States of America, not the Confederacy of America," she said.

Within a couple of minutes of being confronted by Smith-Rayfield, the man sitting next to it took it down and put it on his lap. That was not enough for her and she offered to buy it from the man for $20, so she could dispose of it. She said that, if he wasn't racist, as he claimed, he should have no problem throwing it out.

A man who is a person-of-color was sitting several feet from the people with the Confederate flag and told Smith-Rayfield they had a right to display it, that that’s why he served in the military, for their rights, too.

Smith-Rayfield would have none of that.

Just about everyone at the beach at the time was white, and once in her car, Smith-Rayfield's video went on to say others at the beach should have said something.

"You wonder why we question your allyship. Don’t tell me you’re sorry. Get up and do something!" Smith-Rayfield said.

Evanston Mayor Steve Hagerty had first posted on Facebook that the flag incident was "fake news." He later explained that when he had heard about the incident he went to Lighthouse Beach, but did not see the flag and thought it had been a made-up story.

When he saw Smith-Rayfield's video, he wrote a new Facebook post and apologized for his first post and praised Smith-Rayfield’s "courage and persistence" and called her actions "an example for all of us."

There’ll be an anti-racist rally at Lighthouse Beach on Friday from 2-4 p.m.