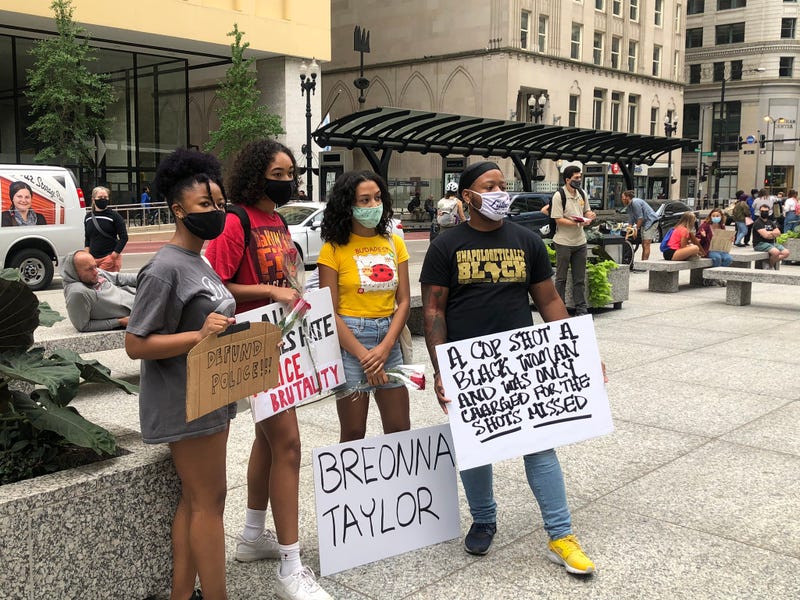 ﻿CHICAGO (WBBM NEWSRADIO) – Hundreds gathered in downtown Chicago Saturday for rally to express outrage at the recent news not to charge any Louisville police officers with directly killing Breonna Taylor and to call for more justice to better protect Black women.

The Say Her Name rally was organized by My Block, My Hood, My City, which created a fundraiser to support black women-led organizations. So far about $52,000 has been raised.

“A cop shot a Black women and was only charged for the shots missed,” read multiple signs held by protesters. Others read, “Say her name;” “Black women deserve better” and “Defund the police.”

The group also staged a sit-in with a moment of silence to remember Taylor.

Protestors stage a sit in at Daley Plaza in remembrance of #BreonnaTaylor @WBBMNewsradio pic.twitter.com/4r1L9pxQ6I

Nathaniel Viets-Vanlear, an organizer with My Block, My Hood, My City, said the goal of the rally was to create a public space for people to react to what he called a lack of charges in Taylors death.

“[The rally is] for folks who also feel the same way, that’s when we erupt,” Viets-Vanlear said.  “That’s when we cause damage because everyone needs an outlet.”

Participant Monette McLin said the rally was a positive and peaceful way to move forward.

“Today I felt like my body and spirit needed to be uplifted,” McLit said. “And to be here in the mist of other people who felt the same way, felt like a big cup full of love.”

My Hood, My Block, My City founder Jahmal Cole said the verdict means change still needs to happen at the national, local and political level and actions like the rally need to be rooted in propelling positive change.

Speaking at a city news conference after the announcement of the lack of charges Wednesday, Cole also said there needs to be more protection for Black women, and shared that on his way to the press conference, he witnessed a Black woman get chocked and punched on Michigan Avenue — and no one around seemed to step up and help her.

“I am ashamed,” Cole said. “We have to start protecting our Black women. This happened right outside.”

You can still donate to the Black Women-Led Organization Fund online.