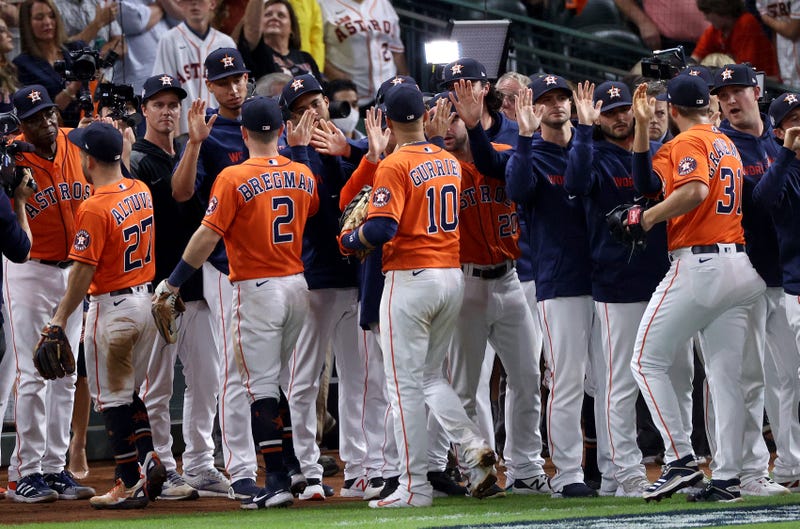 The Houston Astros celebrate the team's 7-2 win against the Atlanta Braves in Game Two of the World Series at Minute Maid Park on October 27, 2021 in Houston, Texas. Photo credit Elsa/Getty Images
By Rick Gregg

ATLANTA, Ga. (WBBM NEWSRADIO) -- In a different world, maybe the first two games of the World Series were on the South Side. How nice that would have been?

Boston was six outs away from taking a 3-1 lead on Houston in the American League Championship Series. Then Houston outscored the Red Sox 22-to-1 the rest of the way.

Atlanta took Game 1 of the World Series rather handily. Then Houston suffocated the Braves 7-2 in Game 2 to reassert itself.

Now the series shifts to Atlanta for the first time since 1999. Two rookie pitchers will meet in Friday's Game 3 - that hasn't happened in the Fall Classic since 2006. After that, it's touch and go on the mound, and at the plate, the tough to stop Astros against a homer-happy Braves side that preys on mistakes and comes through in the clutch.

Savor these last games, by the way - baseball's bargaining agreement expires this winter, and the start of next year is most definitely in doubt. The goose's eggs are pretty golden, so it's unlikely we see a stoppage lengthy enough to put next season fully at risk. But it might be a longer wait than usual before those equipment trucks start heading for warmer climates and Spring Training begins.