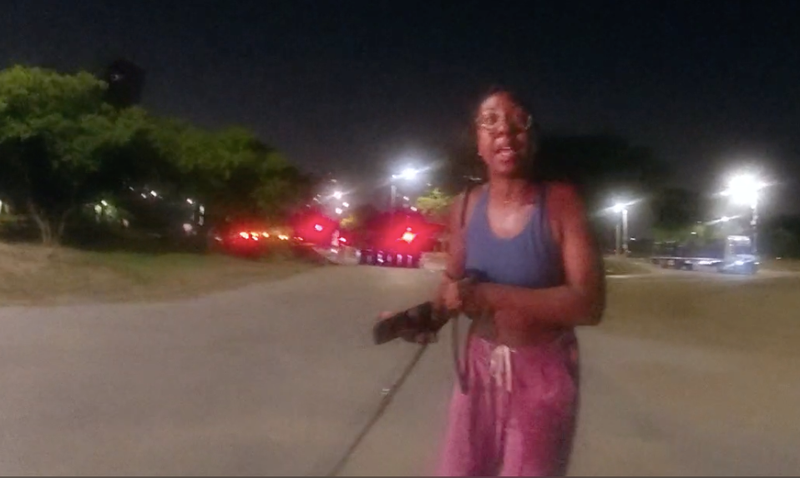 (WBBM NEWSRADIO) — New video footage was released this week by lawyers of a Black woman who claims she was racially profiled and manhandled by a Chicago police officer while she walked her dog on the lakefront.

The 4-minute, 40-second video from the officer’s bodycam shows a different vantage point and has superior audio quality compared to the viral cellphone recordings that Nikkita Brown and a truck driver captured.

Attorneys with Saulter Law P.C., who posted the latest footage on the firm’s website, did not immediately return a call from the Chicago Sun-Times Friday.

The bodycam video shows the officer — identified by Brown’s lawyers as Bruce Dyker — jump out of his vehicle to confront Brown at North Avenue Beach shortly after midnight on Aug. 30.

Audio from the bodycam does not start until Dyker is seen stepping out of his vehicle. At that point, Brown is captured on video with her cellphone raised as Dyker approaches.

The conversation quickly escalates to shouting after Brown asks the officer to “respect her space.”

“Respect your space? I’m about to put handcuffs on you,” Dyker can be heard saying.

“You don’t have a mask on,” Brown is heard replying as she backpedals away from the officer while her small white dog strains at its leash.

“I don’t need a mask on. I’m outside… know the ordinances,” Dyker said, walking toward Brown as she repeatedly says “back up” and keeps moving away from Dyker.

“Get out of the park! What do you not understand about that! The park is closed! You are trespassing on city property and you will go to jail if you do not take your dog and leave!” Dyker then can be heard shouting, jabbing his finger at Brown.

Brown is then seen backpedalling toward the park exit, arguing with Dyker. When she stops, apparently scrolling for something on her phone or sending a text message, Dyker is seen grabbing at her phone and wrist and arm.

Brown and the officer can be seen struggling before Brown drops her phone and Dyker’s bodycam appears to fall off. The video then goes dark and slightly muffled voices of the two can be heard. Brown is heard screaming, “let go! I’m leaving!” and Dyker can be heard shouting at her and threatening to arrest her.

“You don’t understand your situation,” Dyker is heard saying.

“When I’m telling you to exit the park, you don’t wait until police are about to arrest you and then you decide to comply.

“Once I put handcuffs on you, you are going to jail and you’re going to lose your dog.”

The confrontation ends with Dyker releasing Brown after a roughly two-minute struggle. As she walks away, Brown asks Dyker for his name and badge number. He then gives both to her as he picks up the camera. At that point, the bodycam is turned back on.

“You want to go to jail, stay in the park after hours,” Dyker is then heard and seen saying.

Officials with the Civilian Office of Police Accountability have said they have requested video from other nearby cameras that may have captured the encounter.

The officer has been placed on desk duty by Police Supt. David Brown while COPA conducts its investigation.