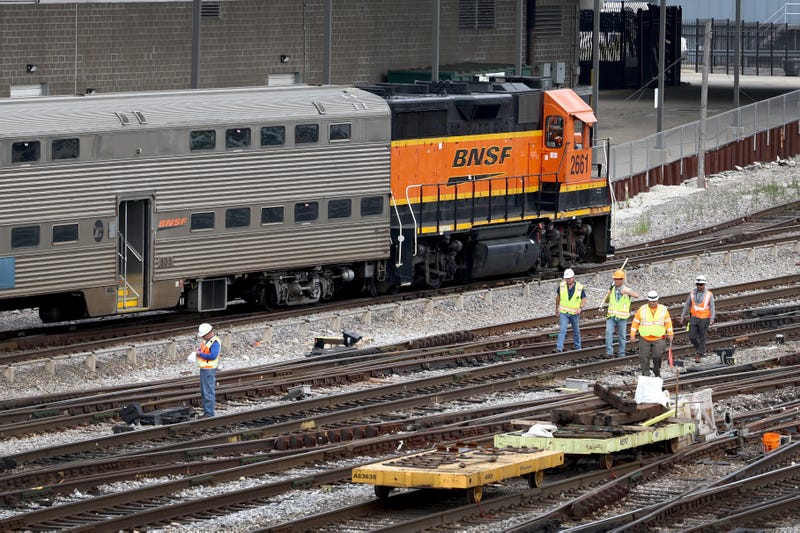 Workers service the tracks at the Metra/BNSF railroad yard outside of downtown on September 13, 2022 in Chicago, Illinois. Photo credit Scott Olson/Getty Images
By Rob Hart

(WBBM NEWSRADIO) - A possible railroad strike is back on the table after a major railroad union rejected the contract proposal that was brokered by the White House several months ago.

The White House agreement that averted a railroad strike in September called for substantial raises and tried to address some of the issues over time off. Railroad workers said they were not able to take time off for family events or doctor's visits.

Freight trains don't operate on a set schedule. They leave as soon as they are ready, which means the crew has to be ready to go at a moment's notice.

He told the WBBM Noon Business Hour this is an emotional issue for workers.

“People can't get the days off they want. There’s an element of disrespect in the minds of employees, and that’s a hard thing to negotiate for because it’s something that’s quite emotional,” Schwieterman said. “(There is) interest in making a statement that the quality of life has not kept pace.” Schwieterman said. Four out of 12 unions have rejected the White House proposal.  Schwieterman believes the possibility of a strike is very real.

“I think at the end of the day, well we could have a good chance of a strike, I don’t think it would be very long,” Schwieterman said.

A strike against the freight railroads would also impact service on Amtrak and Metra.