The House select committee investigating the Jan. 6, 2021, U.S. Capitol attack announced Monday that it would put its two-week vacation on hold for a last-minute hearing on Tuesday.

Updated 2:48 p.m. EST — Rep. Liz Cheney showed a clip of General Mike Flynn's deposition where he pleaded the Fifth Amendment when asked several questions, including if he believes in the peaceful transition of power in the United States of America.

Rep. Cheney then asked former White House aide Cassidy Hutchinson about what happened while protesters broke into the Capitol building. She recalled hearing the former president, Mark Meadows, and other staffers discussing the "Hang Mike Pence" chants being yelled by rioters.

She said that other staffers told Meadows that something needed to be done about rioters storming the Capitol, but he responded that Trump didn't think the rioters were doing anything wrong and that they amused him.

While deciding what to do about the riot, Hutchinson shared that there seemed to be two groups, those who wanted Trump to condemn the rioters and those who wanted to deflect the blame to other groups like "Antifa" and claim they weren't Trump supporters.

Rep. Cheney continued showing several officials and Trump family members urging the president to condemn the attack and tell rioters to go home, which he didn't do until later into the night via video where he told rioters he "loved them."

But according to Hutchinson, even the video he filmed was not easy as she said the former president was reluctant to record it.

Cheney also shared that there were talks about invoking the 25th Amendment to remove Trump from office and strip him of all power by his cabinet members.

Fox News host Sean Hannity discussed this with Meadows, texting him and telling him the president needed to help stop the riots.

Updated 2:02 p.m. EST — Former White House staffer Cassidy Hutchinson testified that White House advisers were worried they might be charged with inciting a riot after Trump's speech and attempt to march to the U.S. Capitol with his supporters.

The former aide to Mark Meadows also shared that she received phone calls from Republican leader Kevin McCarthy who was upset the president had said he was going to the Capitol and said they shouldn't come.

While in the car, Trump reached forward, grabbing the steering wheel before being forced off. Anthony Ornato, then-former White House chief of operations, told Hutchinson that he was upset and grabbed National Security Adviser Robert O'Brien by the throat.

She said that he had said something to the effect of "I'm the f****** President" while demanding they take him.

"I’m the F’ing President. Take me up to the Capitol now." pic.twitter.com/LWg2sdFtTi

Hutchinson said that O'Brien was in the room while Ornato told her the story and did not disagree or say the story was untrue.

Updated 1:45 p.m. EST — Rep. Cheney shared emails sent to and from the White House that said there was a potential for violence at the rally, saying there was also fear the Capitol could be a target.

Hutchinson shared in her testimony that Meadows had been informed of the reports of potential violence in the days before the rally on Jan. 6, 2021, including weapons that were seen on protestors.

In a deposition clip, she said that Meadows listened to the explanation from Deputy Chief of Staff Anthony Ornato but never looked up from his phone while being told of the potential danger, only asking if the president had been informed, which Ornato said he had, according to Hutchinson.

Hutchinson then shared what she heard while she was in the tent before and after Trump's Jan. 6 speech. She said the former president was upset there weren't more people in the official rally area because they had weapons and weren't allowed in by the Secret Service.

Trump reportedly said he didn't care about their weapons and wanted them to be let in anyway, saying, "they're not here to hurt me," Hutchinson recalled. But his request was denied.

Knowing that a large number of those present were armed, Trump continued to encourage them to march to the U.S. Capitol, and Hutchinson said she was called by Ornato and told that they did not have the numbers to defend the building from those rioting.

Hutchinson said she went to tell Meadows, who was in a private car, about Ornato's call, but when she opened the door, he shut the door without speaking to her twice. She said it wasn't until about 25 minutes later that he exited, and she informed him, and she said he "had a lack of reaction."

Updated 1:20 p.m. EST —Committee chairman Rep. Bennie Thompson (D-Miss) shared in his opening remarks that the panel had obtained information detailing what had happened in the White House during the attack on Jan. 6.

Thompson said the information was crucial and needed to be released as soon as possible, explaining why they returned from their two-week break early.

But what was it? The key to that information was former Mark Meadows aide Cassidy Hutchinson, who shared in her testimony first-hand observations of former President Trump's actions and members of his cabinet.

Hutchinson began her testimony by sharing her role while working at the White House chief staff office and as the aide for Meadows. She shared that her work changed daily, working on whatever the president or Meadows requested she work on.

Rep. Thompson continued in his questioning, explaining how closely the former aide worked with the former president before handing the questioning off to Rep. Liz Cheney (R-Wyo).

The Select Committee's witness today is Cassidy Hutchinson, who served in the Trump Administration in the White House Office of Legislative Affairs in 2019-2020 and as a Special Assistant to the President in the Chief of Staff’s office from March 2020 through January 2021. pic.twitter.com/835anPrsAC

Hutchinson shared that in the days before the events of Jan. 6, she had walked out of the White House with Rudy Giuliani, who asked if she was excited for the sixth.

She shared that she asked him what he meant, and after he explained it to her, she returned to Meadows' office, telling him what he had heard. At that point, Hutchinson said that Meadows told her things could get 'real, real bad on Jan. 6."

Updated 11:45 a.m. EST — The hearing is said to feature testimony from Cassidy Hutchinson, who served as an aide to former White House chief of staff Mark Meadows, according to two sources familiar with the matter, ABC News reported.

Other reports say that the hearing will be centered around newly obtained evidence that could not wait until July, The Washington Post reported.

A statement from the committee said it would “present recently obtained evidence and receive witness testimony.”

The committee has already interviewed Hutchinson, doing so behind closed doors, with clips from her deposition having been shown during earlier parts of the hearings.

In one of the clips played from her deposition, Hutchinson testified that Meadows and former Trump attorney Rudy Giuliana were involved in early conversations about putting forward fake slates of electors.

Another clip included Hutchinson naming several Republican members of Congress who had reached out about potential pardons for either themselves or others.

Among those named was Reps. Matt Gaetz of Florida, Mo Brooks of Alabama, Andy Biggs of Arizona, Jim Jordan of Ohio, and Louie Gohmert of Texas.

However, live testimony from Hutchinson could be significant, as the committee has considered her a top witness due to her proximity with Meadows. The committee rushing to return from holiday to complete the hearing also leaves many wondering what she could say.

Still, the topic of the hearing has yet to be released, as it will begin at 1 p.m. EST and will be the sixth public hearing this month.

However, according to a source that spoke with CNN, one potential reason for the secrecy is said to be security. But the committee has declined to comment on Tuesday’s hearing at all. 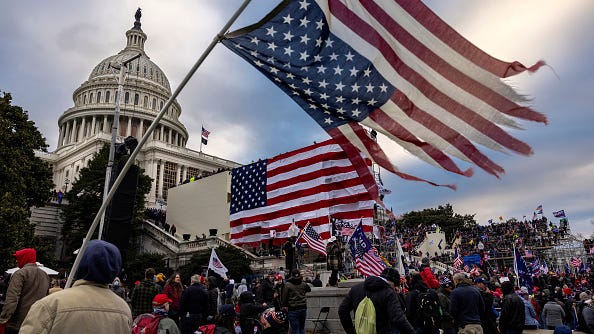 Poll: 55% of Republicans describe the events of Jan. 6 as 'defending freedom' 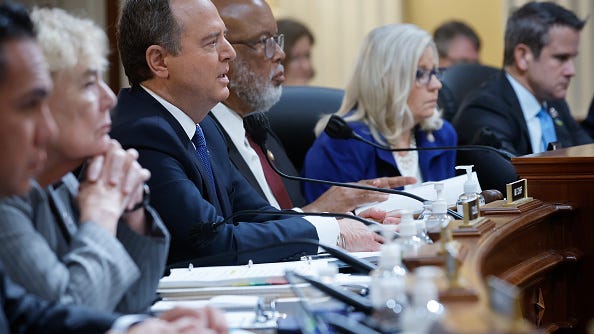