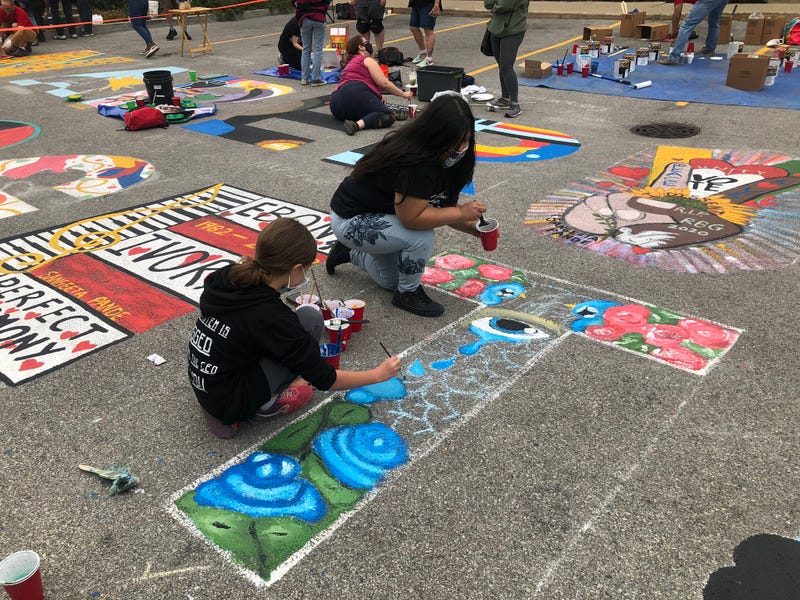 NAPERVILLE (WBBM NEWSRADIO) -- A new street mural in downtown Naperville hopes to promote a positive message of inclusivity, unity and racial justice supported and created by the community.

The mural, titled "Naperville Together" is now on display in the parking lot of the Naperville Township building and was completed Saturday.

Each of the 18 letters were assigned to a local artist who represents racial and social minorities and worked with a team to paint a design within the 7-by-5-foot outline on the pavement, project leader Sangeeta Pande said.

"We have LGBTQ representation, we have groups from Asia, we have some people from India," Pande said. ""It signified unity, inclusion and diversity of our city as well as the driving force behind the letters."

It's the first piece of art developed by the Art of Inclusion committee, which launched following criticism of another Naperville mural titled "Naperville Loves a Parade." The committee's mission is to create public art that reflects the diversity of Naperville to promote diversity and inclusion within the community.

Fellow organizer Julie Kulak said the mural project is a step in the right direction and wants it to be a message for all the diverse residents of Naperville.

"We recognize you, you are out there," Kulak said. "Hopefully, we will have some projects down the road that can bring people in even closer."