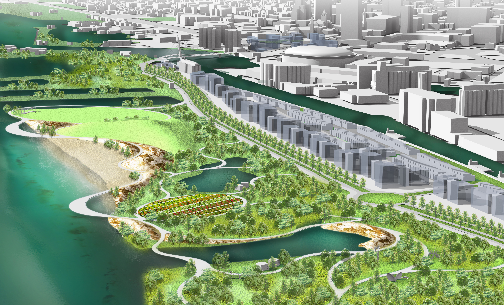 BUFFALO (WBEN) - On Monday night, the finalists for "Aim for the Sky: Competition to Re-Imagine the Buffalo Skyway Corridor" were announced.From approximately 100 submissions, the final nine plans were unveiled at a session Monday evening and the winner will be announced Tuesday following LIVE presentations by the designers at One Seneca Tower.

The nine finalists are:

Syracuse, N.Y. and the Netherlands

This submission bills itself as a "future-proof design for the Skyway Corridor."  It envisages a gradual development of the area through a systematic implementation of complementary stages that address the Inner Harbor, Outer Harbor North and Outer Harbor South. The Skyway would remain in this proposal and gradually converted to accommodate multi-modal access including either bus rapid transit (BRT) or light rail transit. It would also be complemented by a series of new pedestrian bridges between the Inner and Outer Harbor.

This submission says it will "Keep the Skyway and reinforce the heart of Buffalo."  It proposes keeping the Skyway, adding new street-level greenway and access features and reframing the entire system for new use. The proposal calls for new local bridge connections between the Inner and Outer Harbor at Michigan Avenue and at Ohio Street near the southern terminus of the City Ship Canal. The Skyway River Loop is about making connections to the existing neighborhoods and supporting their further development and use.

The City of Lights: Owning our Waterfront

This concept for Skyway and Route 5 Corridor is "actually quite simple; remove the barriers separating the City of Buffalo from its waterfront." Removal of the Skyway (Church Street to Prime Street) along with the access ramps makes 12 acres available for development in downtown and Canalside. A piece of the Skyway high level bridge would be re-purposed as "SkyPark," which would provide iconic views and recreational amenities. Traffic would be redistributed over a series of new facilities including a new "Tifft Street Extension" road connecting to I-190; a new lift bridge at Michigan Avenue; and a new road connection between Ohio Street and Fuhrmann Boulevard south of the City Ship Canal; among other improvements.

This submission proposes a strategy that "capitalizes on this historic opportunity to remove the notorious 'Skyway' and extend the positive legacies of Buffalo's artistic, cultural and industrial past directly into an intelligent, beautiful and ennobling future. This vision depends on a robust program of dense infill neighborhoods on lands opened up or facilitated through a Skyway removal, involving mixed-use and residential development in and around the Queen City Harbor. The concrete piers of the Skyway bridge would be repurposed to accommodate solar and wind power production.  Access would be provided through a retrofit of Fuhrmann Boulevard and Ohio Street to accommodate multi-modal access including BRT, while new lift bridge connections would be provided to the Outer Harbor at Main Street.

This plan envisions the Skyway Corridor to be "redeveloped through multiple mixed-use neighborhoods, each with an intimate relationship with public open space by designing with nature and driven by new modern infrastructure networks." The plan would involve a long-term phased approach that would lead to the ultimate removal of the Skyway bridge and convert the elevated expressway with an Olmsted parkway. A similar conversion of a downtown segment of I-190 is also proposed, along with light rail transit extensions to the Southtowns and the Airport.

This proposal is inspired by Olmsted's vision of connecting his earlier parks to the north. This vision would replace the Buffalo Skyway's elevated expressway with an Olmsted Parkway and remove the high-level bridge. The Outer Harbor would see a new Olmsted Park; new infill real estate development on land previously occupied or made less usable by the Skyway; a "Ship Canal Promenade"; and a Buffalo Sculpture Park. A new lift bridge would connect the Inner and Outer Harbor and a number of interchanges and weave segments along I-190 would be removed or simplified to address traffic. A new light rail extension to the Outer Harbor is also envisioned.

The centerpiece of this proposal is to remove the Skyway and Route 5 entirely from I-190 through the Outer Harbor and south to Tifft. With it fully gone and replaced by a "grand boulevard along Ohio Street, the entire corridor will transition to being some of the city's premier living, entertainment and recreational venues with nature preserves, havens for fish and other water life." Two alternative visions are considered for the Outer Harbor—one involving largely open space uses and one involving a small mixed-used village center. The proposal envisions a new lift bridge at Michigan Avenue to the Outer Harbor, and multi-modal access features on all local streets in the corridor, including the ability to support a light rail extension down Ohio Street, as well as bus and water taxi access.

As part of this vision, traffic that currently travels on the Skyway Corridor as far south as the Union Ship Canal will be diverted onto a new highway and Fuhrmann Boulevard will be reduced to one traffic lane in each direction within the Corridor. The Skyway itself will remain standing and be adapted to new purposes for the next few years, beyond which its long-term future may be determined by a public decision-making process. Future development in the corridor would largely follow existing plans.

This plan's vision is to create a sustainable transport system for the Skyway Corridor that makes a major contribution to the corridor's livability by replacing the existing highway. This system would apply intelligent transport systems strategies to existing routes, thus increasing their efficiency, and build a sustainable transport network through the corridor. The Skyway itself would be slowly phased out, initially to incorporate bicycle and pedestrian access on it while other road, bridge and transit are developed, and ultimately to remove it at the end of its useful life.

"We're particularly excited to get so many high quality submissions," said Howard Zemsky, chair of Empire State Development. "We got 100 submissions; then we had 16 folks submit at our invitation of more detailed proposals, and now we have whittled that down to nine who will be presenting."

The top-three finishers will receive prizes of $100,000, $50,000 and $25,000, respectively, and Zemsky also noted that, while the winning design likely won't be copied verbatim, the major elements of the design will provide a nice blueprint for the future of the Skyway.

"Conceptually, the first-place winner would be aligned, I think, with the recommendation of the panel as to go forward," he said. "It's not that you have to follow every element of the plan - it's about the quality of the work and how compelling is it? How realistic is it? How impactful is it? How achievable is it? All of those types of things."