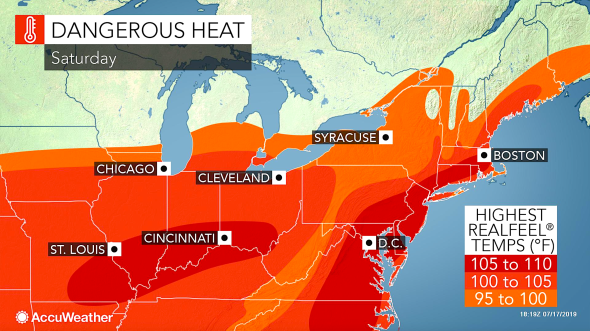 Buffalo, N.Y. (WBEN) - After Friday's unsettled weather and lines of storms that washed through the region, the heat wave presses on and oppressive humidity levels will accompany the hot weather.

CanalFest workers trying to "beat the heat" this weekend

“With the season’s hottest weather expected to settle over Buffalo this weekend, we’re asking residents to protect themselves and other from the potential effects of extreme heat,” said Buffalo Byron Mayor Brown. “Please avoid strenuous activity, stay hydrated, stay inside whenever possible, and please keep an eye on your vulnerable neighbors.”

We're not alone in the hot house as AccuWeather estimates that more than 87 million Americans live in an area where a daily record-high temperature could be set on Saturday.

Temperatures around 100 F are possible in the cities of Washington, D.C, Philadelphia, New York City, Boston and St. Louis.

EXCESSIVE HEAT WARNING REMAINS IN EFFECT UNTIL 6 PM EDT THISEVENING* LOCATIONS...Niagara, Orleans, Monroe, Wayne, Northern Cayuga,Livingston, and Ontario counties.* TIMING...Through early this evening.* HEAT INDEX VALUES...As high as 105.* IMPACTS...Heat illnesses likely for those spending prolongedperiods outdoors or in non-air conditioned locations. Prolongedheat is most dangerous for young children and the elderly.Vehicle interiors can reach lethal temperatures in a matter ofminutes. Never leave children, pets or the elderly unattended inparked vehicles.PRECAUTIONARY/PREPAREDNESS ACTIONS...An Excessive Heat Warning means that a prolonged period ofdangerously hot temperatures will occur. The combination of hottemperatures and high humidity will combine to create a dangeroussituation in which heat illnesses are likely. Drink plenty offluids...stay in an air-conditioned room...stay out of the sun...and check up on relatives and neighbors.Take extra precautions if you work or spend time outside. Whenpossible...reschedule strenuous activities to early morning orevening. Know the signs and symptoms of heat exhaustion and heatstroke. Wear light weight and loose fitting clothing whenpossible and drink plenty of water.

In the forecast conditions, perspiration fails to evaporate quickly and the body temperature can climb significantly, followed by heat exhaustion and heat stroke.

Heat kills more people on an annual basis than any other weather-related factor.

Europe shattered June temperature records by far, while other records were set in Russia, Africa, Asia and South America. France had its hottest month in history, which is unusual because July is traditionally hotter than June. The Lower 48 states in America were near normal.

"Earth is running a fever that won't break thanks to climate change," North Carolina state climatologist Kathie Dello said in an email. "This won't be the last record warm summer month that we will see."

It seems likely that July too will be a record hot month, said Berkeley Earth climate scientist Robert Rohde.

The United States set a record for most precipitation. The 12-month period from July 2018 to June 2019 was the wettest on record.

The first half of 2019 is tied with 2017 for the second hottest initial six months of the year, behind 2016. So far the year is 1.7 degrees warmer than the 20th century average.

This heat "is what we can expect to see with a warming climate," said Freja Vamborg, a climate scientist at the Copernicus Climate Change Service in Europe.