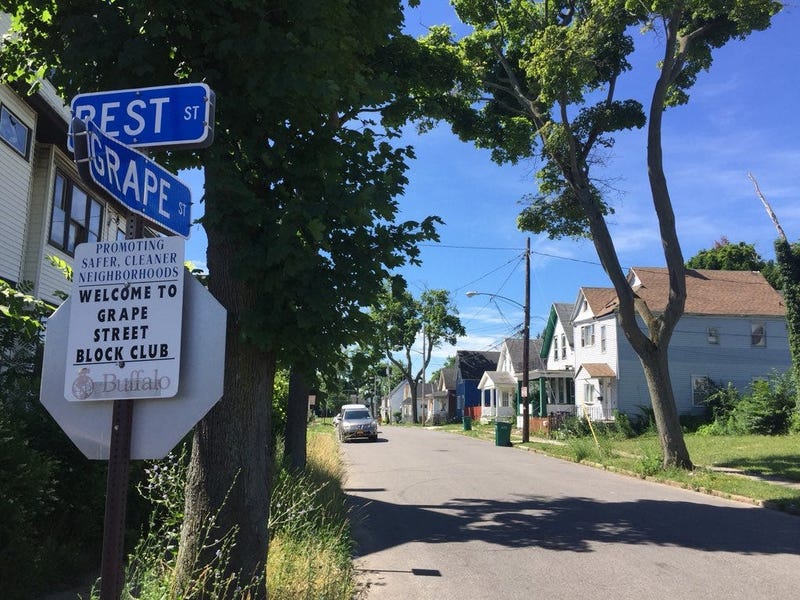 Photo credit Corner of Best Street and Grape Street in City of Buffalo. Home on right was site of deadly shooting on July 2, 2018 which took the life of a 54-year-old Yvette Johnson and her 17-month-old grandson, Kyrie. July 3, 2018 (WBEN Photo/Mike Baggerman)
By Mike Baggerman, WBEN

BUFFALO, N.Y. (WBEN) - The verdict in the trial of a man accused of the 2018 double-murder on Grape Street in Buffalo will be read on Tuesday morning.

Kenyatta Austin is accused of the murder of 54-year-old Yvette Johnson and her 17-month-old infant grandson, Kyrie, on July 2 outside of a home in Buffalo's Fruit Belt neighborhood. Austin, 26, faces life in prison if convicted of the crime.

Judge Kenneth Case will read the verdict on Tuesday.

The shooting happened just after 12:30 a.m. by a home near the corner of Grape and Best Streets. Two other men were shot in the leg but survived the injuries. Neither Yvette nor Kyrie were the targets.

Buffalo Police received a number of tips from the community in response to the shooting, culminating in the arrest and arraignment of Austin that August. Austin was charged with four counts of murder after he was originally arrested on a weapons charge in Niagara Falls on July 3.

"We believe there were others involved in this homicide," Erie County District Attorney John Flynn said in August 2018 after charges were filed against Austin.

Authorities have not announced any other arrests in connection to the shooting.

Austin was not charged in connection to a second shooting outside the same home that happened later that month because he was in custody. Police said the two shootings on Grape Street were connected and were gang related.

Buffalo Mayor Byron Brown said that anyone who was involved in the homicide should never think they can rest easy.

Brown continues to urge community engagement as a way to build the relationship between police and the public.