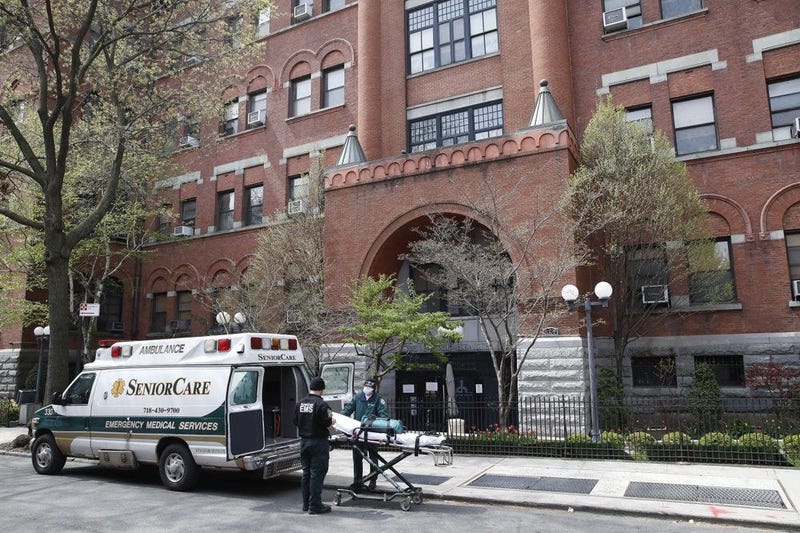 Buffalo, NY (WBEN/AP) New York’s coronavirus death toll in nursing homes, already among the highest in the nation, could actually be a significant undercount. Unlike every other state with major outbreaks, New York only counts residents who died on nursing home property and not those who were transported to hospitals and died there.

One area doctor says getting an accurate count will be tough.

The state’s official care home death toll of just over 6,600. But so far the administration of Democratic Gov. Andrew Cuomo has refused to divulge the number, leading to speculation the state is manipulating the figures to make it appear it is doing better than other states and to make a tragic situation less dire. Since May, federal regulators have required nursing homes to submit data on coronavirus deaths each week, whether or not residents died in the facility or at a hospital. Because the requirement came after the height of New York’s outbreak, the available data is relatively small. According to the federal data, roughly a fifth of the state’s homes reported resident deaths from early June to mid July — a tally of 323 dead, 65 percent higher than the state’s count of 195 during that time period. Even if half that undercount had held true from the start of the pandemic, that would translate into thousands more nursing home resident deaths than the state has acknowledged.

This week, State Senator Patrick Gallivan grilled state Health Commissioner Howard Zucker on the matter. "I'm focusing on the process the hospitals had to follow to discharge people back to nursing homes. I'd also like to know how many nursing home patients were transferred to the hospital, and when they were in the hospital, died of coronavirus," Gallivan said. "We have already discussed the issue of the nursing homes, I'm here to focus on the hospitals and the challenges they had," replied Zucker. "I addressed this issue a week and a half ago, and I said I would provide the information when I go through it, and when I do that I will be happy to answer them." With regards to the change in the governor's executive order May 10th, "That issue is we now have the capability to do more testing before someone left the hospital. That was the purpose of the May 10th order," explained Zucker.

UB's Dr. Bruce Troen says the coronavirus has exposed a weakness in nursing homes. "The fundamental issue is they are cauldrons waiting for infections to happen. So what the pandemic has done has pulled back this Band-Aid over what has been in many cases substandard conditions," says Troen. "The official death toll refers to people who died while at the nursing home, and we know there are others who were taken to the hospital and died at the hospital. I think the best path is here is plan for the future so when there's another pandemic how are nursing homes will be better protected."

Troen says current and past administrations have tried to reduce nursing home regulations when it comes to fighting infection. Now, he says there need to be appropriate enforcement of regulations to protect nursing home residents. "That means having an infectioius disease control member on staff. We also have to think about helping to pay a living wage and benefits to help the nursing home workforce, and we learned a quarter of those staffers had COVID," notes Troen. He says when the community spread came down in New York, the infection rates came down in nursing homes, something he says must continue.

music
KISS gets in the spirit with their own, KISS Cold Gin: Here's where to find it
music
Is Halsey planning to release more than a baby in 2021? Fans think so
music
‘Sesame Street’ introduces family with 2 gay dads in new episode during Pride Month
music
Listen to Audacy's Friday Night Takeover with Luke Combs
music
Run That Back: Reminiscing on the short-lived greatness of City High
music
Selena Gomez reveals she 'never really felt equal' in 'cursed' past relationships