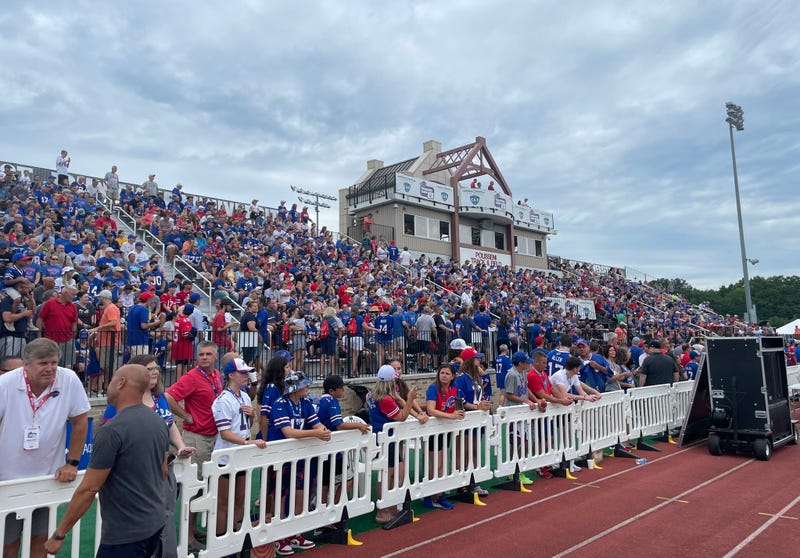 Pittsford, N.Y. (WBEN) - After a few years away from St. John Fisher University due to the COVID-19 pandemic, Buffalo Bills fans have been able to enjoy the experience of getting back to training camp to get a look at a team with massive expectations for the 2022 season.

"This is great," said Bills fan Mike Ryan from Tonawanda. "We've come here, I don't know for how many years, but after two years off, it's good to be back."

"This is actually my first time ever coming to training camp, so I was so excited to make the journey," said Jill Anderson from Grand Island. "Just being able to see them get ready for, what I'm hoping is going to be such an amazing season is a great, great, great, exciting experience."

For nearly two weeks, fans have flocked to St. John Fisher in Rochester to take in training camp practices for a team that has won the AFC East for two-straight years after going 25 years without being crowned division titles.

For some, the hype gets heightened at this time of year when they get that early look at the likes of Josh Allen, Stefon Diggs, Von Miller and others donning the blue and red at training camp.

"It feels more personal being able to see them practice than seeing them at game time, like just [seeing] them get ready," Anderson said. "Feeling the energy and the excitement from 'Bills Mafia' is just so exciting this morning."

It’s a great day for some camping at St. John Fisher University! The #Bills are set to take the field shortly, and the fans have flocked in despite some sporadic sprinkles here and there. pic.twitter.com/5BTYJxMo7N

"I think the major difference is the excitement for the season," said Bills fan Chris Irvin while at camp with his family from Rochester. "Last time you were allowed here [in 2019], we didn't know what we were gonna have. Now [having] high expectations for the Super Bowl and stuff, it's exciting to be able to come to one of 32 training camps in the NFL and see some great players. And hopefully they carry through this year."

In years past, fans came to training camp and were keen on closely watching big position battles like at quarterback. People would eagerly watch the likes of Tyrod Taylor, E.J. Manuel, Trent Edwards, J.P. Losman and many others attempt to win battles and earn the starting job. This was even the case the last two times at St. John Fisher with people trying to gauge what the team has in the likes of Allen after being drafted in 2018.

However, with such high expectations to be in contention to represent the AFC in the Super Bowl, the pieces for the upcoming season are almost all set in stone. Allen is the starting quarterback in Buffalo, while Diggs, Gabriel Davis and Isaiah McKenzie solidify the wide receivers room, and the No. 1 ranked defense in 2021 looks ready to return to form in 2022.

That feeling of not having to question much with this Buffalo roster certainly puts a lot of Bills fans at ease. Just as long as there are no injuries that throw a wrench into plans for the upcoming season.

"It's nice. They definitely have a good team this year with all the new people coming in. It's just going to be a good season," said Bills fan Sara coming to training camp from Brockport.

Just as much as people are excited for what's potentially to come this season in Buffalo, there are some fans who still have their reservations due to the events of seasons past.

"I've been a Bills fan for years and I've seen what happens sometimes," said Tom Linden at camp with his father-in-law from Canadaigua. "They play like that, and then all of a sudden they go into almost like a lull. But I think this team is going to pull it together."

"It's the same as every year, we always have high expectations until the season gets here," added Scott from Seneca Falls, who was at camp with his nephew Easton. "But the reality is we expect winning now, because of the caliber of the players and the coaching staff. So the mindset's different. It's not just being a fan and watching your team. We're here, we're here to compete."

So what are fans paying attention to at training camp, in particular? For some, it's still how some of the players perform on the practice field.

"I'm all about Josh Allen. I want to see how that arm's looking, I want to see that placement," Anderson said. "Each year he makes such good adjustments, and he practices so hard that he's ready to go. I want to see the progress from last season to this season."

"Definitely watching Von Miller, because obviously that's a good addition to the team. Also watching [Stefon] Diggs the other day was awesome. Everyone just looks like they're doing really good," Sara said.

As for someone like Irvin, who's a high school football coach, it's more about watching how a professional practice is handled and maybe picking up a few things to take back to practice. But, of course, it has more purpose to him than just being a better coach.

"I'm just more excited for my kids to be here," Irvin said. "It's their first experience at training camp, so I'm excited for them and let them see the big NFL players and stuff."

As the fans are soaking in all they can in Rochester at training camp, they are also gearing up for the team to make a special trip back to Orchard Park on Friday for the annual "Return of the Blue and Red" practice at Highmark Stadium.

While many in "Bills Mafia" are eager to get a look at their favorite players back on the playing surface of the stadium before live game action kicks off next Saturday, the players are just as ready to get back to work in a bigger, and louder environment.

One of those players getting his first chance at playing, let alone practicing in front of the fans at Highmark Stadium is first-year pass rusher Von Miller. The 33-year-old has played in three games in Orchard Park while a member of the Denver Broncos, and as he pointed out, all three appearances were losses.

Now that he's on the home side of the sidelines and dressed in Bills gear, he's excited to see what "Bills Mafia" is all about.

"I'm excited to see what they can do," said Miller during his meeting with the media on Thursday. "Everybody hypes them up, and everybody has so many great things to say. I'm familiar with 'Bills Mafia', but to see it up close and personal at the stadium, I'm excited about it."

"It's gonna be a fun atmosphere, hopefully they get pumped up," added Bills quarterback Josh Allen during his press conference on Thursday. "Von's gonna pump them up. He's a rockstar. Every time he comes out here to camp, he's got the biggest cheers, he really does. So it's good to see. Hopefully 'Bills Mafia' shows him some love [Friday] night."

Nearly two weeks into Bills training camp, Miller says he's definitely felt the love of being a member of the Bills and having the fans appreciate him. This all comes before the veteran pass rusher even takes a regular season snap on the defensive line.

"The people of Buffalo, the people of Rochester and just Bills fans, in general, are great," he said.

When Miller arrived to training camp, he made mention of needing some supplies for his time spent in the dorm rooms of St. John Fisher University. To his surprise, Bills fans flocked to welcome him and ended up dropping off toilet paper and other essentials needed for his stay at camp.

"I mean, fans are always great, but this is just different," Miller said. "You say one thing in front of the media, you don't even expect it to blow up like it did. It blows up, and you've got fans reaching out and so many different vibes, so many different people just trying to help out and make your time here great. I'm appreciative of it."

Von Miller takes some time to have a catch with the fans at #Bills training camp. pic.twitter.com/YcI1fMrbNI

Not only is Miller grateful for the fans and their continued support of the team, he says he's also had a great appreciation for the staff on-hand in Pittsford to help the team get acclimated and comfortable in the settings on campus.

Friday's "Return of the Blue and Red" practice in Orchard Park gets started at 5:30 p.m. ET with gates at Highmark Stadium opening at 4 p.m. ET. A reminder that the practice is sold out, so a ticket is required to attend.