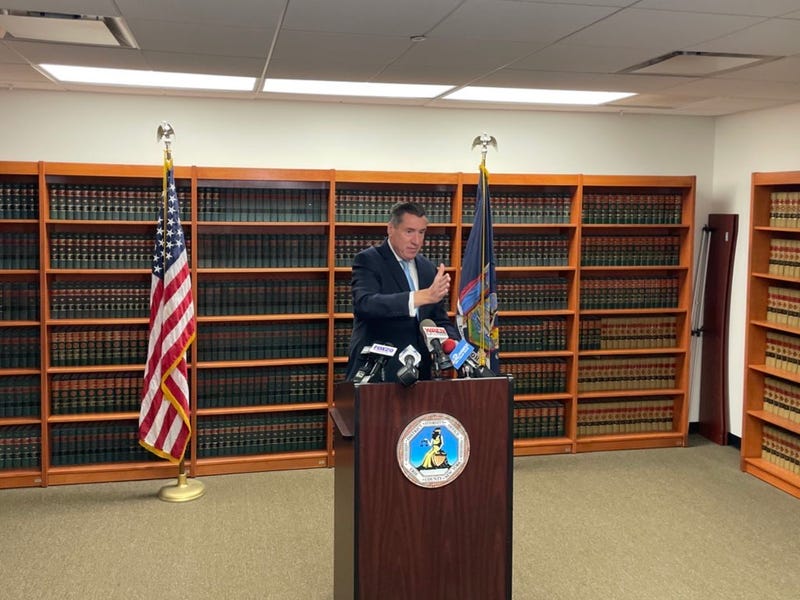 Buffalo, N.Y. (WBEN) - The adolescent offender alleged of being behind the wheel of a deadly one-car crash nearly a month ago on the Kensington Expressway was back in court on Tuesday for arraignment on further charges.

The 16-year-old male from Buffalo was arraigned Tuesday morning before Erie County Court Judge Susan Eagan, a designated Youth Part Judge, on an indictment charging him with the following offenses:

Flynn details how the crash happened that Oct. 24, saying significant speed played a role in that accident, where all five of the passengers in the car were ejected from the car. Three teens died at the scene, and another teen died later of their injuries at ECMC. pic.twitter.com/hEtyLDUCbz

It was back on Oct. 24 at approximately 6:45 a.m. when the adolescent offender was allegedly operating a stolen Kia Sportage on the inbound Kensington Expressway when the vehicle crashed near the entrance to the westbound Scajaquada Expressway. The Kia Sportage had been reported stolen earlier that morning from Marine Drive in the City of Buffalo.

The driver is accused of recklessly causing the death of those four passengers.

"We had a horrific motor vehicle accident where four of the five passengers died as a result of the motor vehicle accident," said Erie County District Attorney John Flynn on Tuesday. "I am not going to tell you what the exact speed limit, but we have a pretty good idea of a ballpark speed limit. That number is a result of testing that was done, and under my ethics rules, I'm precluded from telling pre-trial, what the results of testing are. So I can't give you a number, but I can tell you that the allegation is that he was speeding and going at an excessive rate of speed.

"If you know that off-ramp of the I-98 coming off to 33, there's a concrete barrier there in-between the 98 and 33. The allegation is that he was going so fast that he kind of rolled up onto that concrete barrier, and then came around the turn and then hit the second concrete barrier that is there on the actual off-ramp itself. When that car hit that second barrier, it kind of flipped up backwards, allegedly. The Kia Sportage had a sunroof that encompass the entire roof of the car, and all five passengers were ejected and flew out and crashed through the sunroof."

Flynn further details that three of the individuals were in the backseat, and the fourth victim was in a cargo area of the vehicle.

Meanwhile, the fifth passenger, a 14-year-old female, was hospitalized at ECMC with serious physical injuries for some time, but has since been released. Flynn says that he has spoken with the 14-year-old as part of his investigation into the matter.

Shortly after the accident, the adolescent offender was arraignment in Erie County Family Court on one count of Criminal Possession of Stolen Property in the Fourth Degree (Class “E” felony) and one count of Unauthorized Use of a Motor Vehicle in the Third Degree (Class “A” misdemeanor). 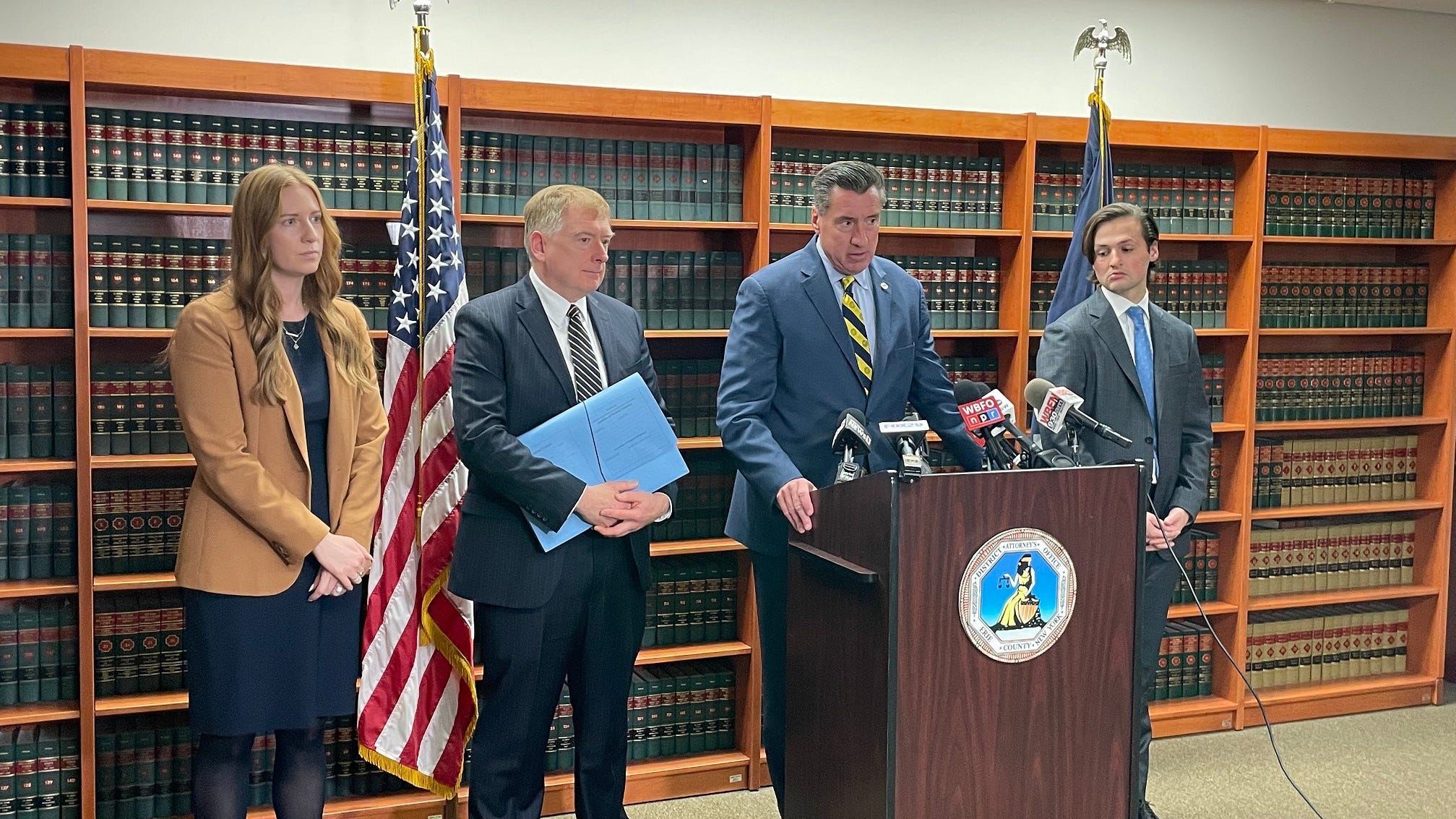 According to Flynn, the two separate charges of assault in Tuesday's arraignment pertain to the 14-year-old female passenger who was in the front passenger seat who survived the accident.

"The legal theory on the Assault in the First Degree is on a furtherance of a crime. So my allegation is that he was in possession of a stolen vehicle and driving around a stolen vehicle. And in furtherance of that crime right there, an assault was allegedly committed," Flynn explained. "Then the Assault in the Second Degree just pertains to the injuries that the passenger had. She was in the trauma care unit for a couple of days following this incident. She is now out, doing better, but she still has some significant scarring and other bruises and whatnot to her body. So I'm alleging that those injuries qualify under Assault in the Second Degree."

Of the charges handed out to the 16-year-old adolescent offender on Tuesday, the highest charge he actually faces is the Assault in the First Degree on the passenger.

"I looked at a murder charge here under the [Depraved] Indifference legal theory. I could not reach that theory under the law, so the most that I could charge here was manslaughter. But I do have a violent felony in the Assault in the First Degree, and the maximum on that is 25 years," Flynn said.

As Flynn also points out, the adolescent offender is not facing a stolen possession charge, because the District Attorney cannot prove who stole the car.

"I think I can prove that he was in possession of a stolen vehicle, but I cannot prove who stole the car," he said. "The car was stolen the previous night, on Sunday night from the parking lot of the Marine Drive apartments here in Downtown Buffalo where the owner of the vehicle lived."

The adolescent offender is scheduled to return on Monday, Nov. 28, 2022 at 2 p.m. for a pre-trial conference. According to Flynn, that is when his office will argue to the judge that a motion does not need to be made and the matter should remain in adult court and not go back to family court.

"Under the raise the age law, the guidelines are if you can show either use or display of a firearm, if he can show a sexual offense, or No. 3, you can show that significant injury, physical injury was done. In this case, I have death, so I should be able to qualify under that legal theory in order to keep this case and not have this case go to family court," Flynn explained. "A judge, obviously, could disagree with me, the judge could make me file a motion, and that motion would then be heard 30 days from now. But hopefully, we will not have to file that motion, and hopefully on Monday we can just get a ruling that this matter meets the criteria and, therefore, should be kept here in the youth part of adult court."

The adolescent offender was also released under supervision on Tuesday with an ankle monitor device. Flynn claims he vehemently argued against it, as he did nearly a month ago when he was first charged on Oct. 28.

"I made a kind of an off-the-collar comment three weeks ago at the arraignment here that I didn't think it was right that this kid is out playing video games, and there are four other kids who are dead. I still don't think it's right that this kid is out playing video games when on Thursday of Thanksgiving, there's going to be an empty chair of four individuals at the Thanksgiving dinner table, because their loved ones, their family members are not going to be eating Thanksgiving because they are deceased and this kid is now out," Flynn said. "We argued that and to no avail, obviously, and the judge continued the release."

More from Tuesday's press briefing with Flynn is available in the player below: