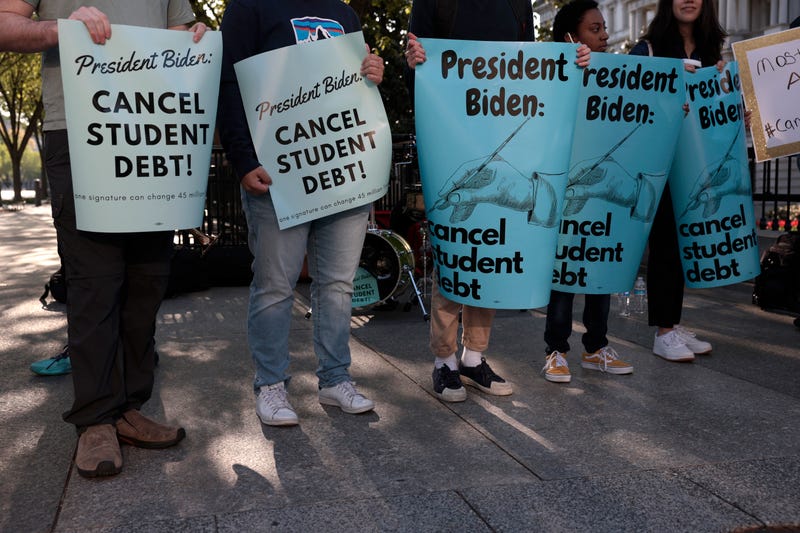 Buffalo, N.Y. (WBEN) - President Joe Biden told a reporter Monday that he is nearing a decision on enacting student loan forgiveness in addition to a possible gas tax holiday. These efforts are being considered in response to the rising inflation and a historic rise in gas prices.

Unlike the gas tax, Biden does not have to go through Congress to relieve student loan debt. Democrats in Congress as well as student loan financial experts say that President Biden is within his rights to enact an executive action to provide student loan forgiveness.

Biden's administration has been calling on Congress to enact a student loan forgiveness bill with no success. Now nearing midterm elections, there is increased pressure to act and Biden is open to addressing student loan debt.

Biden rejected $50,000 in broad student loan forgiveness, a figure which was proposed by student loan advocacy groups and Democrats in Congress. However, $10,000 in loan forgiveness is a number that Biden has indicated he could support. The administration is rumored to be potentially imposing income restrictions, which could further complicate the student loan relief.

In March 2020, the start of the pandemic, there has been a pause on student loan debt, which has provided two and a half years of time for students to pay back their debts without accruing interest. This pause, after extensions from both the Trump and Biden administrations, is set to expire on August 31st. The Biden administration could very likely extend this date.

If you have student loan debt, what should you do? Financial advisor, Katherine Christoferson thinks that you should continue to pay what you can afford once the expiration date expires and look into income-driven repayment programs.

"They don't have to pay until August 31. That's the deadline for the freeze. So if they're unable to repay their debt, they can wait until then. I would encourage them to check into this income-driven repayment plan and get their payments to a point where it's more affordable for them and as their income increases, they'll be paying more, but they may be paying less as they're getting their career started," said Christoferson.

"There is a bill that's on the books right now that I don't think enough borrowers are taking advantage of and that's the Income-Driven Repayment Program and how this works is that payments are set at 10% of a borrower's discretionary income. So you're not locked into a payment and the exact payment is based on how much discretionary income you have from year to year. After 20 years of payments, anything under this program that exists after 20 years of payments, whatever the balance is, is forgiven. Now, if this administration wanted to do something, what I which I think would be more fair, it would be to more publicize this program and maybe make it easier to enroll, to streamline the process for determining the payment amounts because they have to be done on an annual basis," Christoferson added.

Comprehensive Wealth Planner, David Burgio says he wouldn't pay student debts until he gets clear answers on what the administration is planning to do.

"If I was in that position, I wouldn't pay either until I have a little bit of clarity with it because they're not sure if they pay. They're gonna have that much less forgiven, kind of the way with the uncertainty in terms of what the President decides to do. For the time being, while the payments and interest are being suspended, I wouldn't pay," said Burgio.Christoferson thinks the Biden administration should publicize a