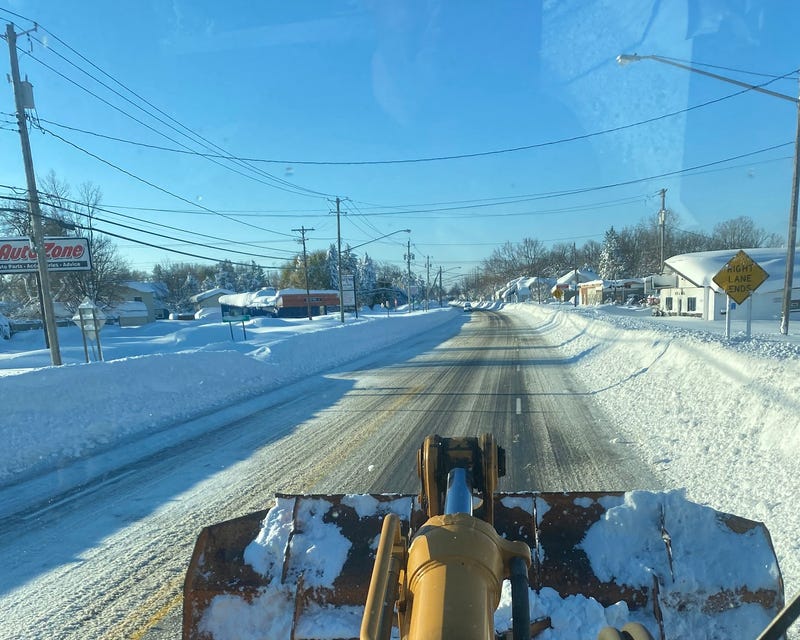 Hamburg, N.Y. (WBEN) - "I had nothing going on anyway, so why not jump in the loader. It's kind of more of just playing in the sandbox, for me."

When the flakes started flying, at first, late Wednesday night and into the weekend across portions of Western New York, they came down with a vengeance. In a four-day span, the National Weather Service had registered some record-setting snow accumulations, with one report in Hamburg registering 81.2 inches of snow.

From the @NWSBUFFALO: Snowfall totals for “Snowvember 2.0” that started the night of Wednesday, Nov. 16 and ended the night of Sunday, Nov. 20: pic.twitter.com/R4kyOGUx8F

With the massive amounts of snow that fell across the region, the cleanout efforts certainly weren't going to be as simple as using a shovel, snow blower, or even a plow attached to a truck or RTV.

"I would say unless you were out there with a snow blower every single hour, I don't think you stood a chance to keep up," said Jason Kuhn, co-owner of Hamburg Overhead Door. "Unless someone has equipment, I don't think anyone stood a chance to get out. I mean, no plow truck's going to touch it, no small little tractor without working for hours. It was Skid-Steers and high loaders were the only things that were going to clear the driveways, especially at the end where it started to get piled up more-and-more."

As it turned out, Kuhn was one of the local residents or business owners that were able to get around through the winter conditions to help people dig out of the snow.

"Friday we closed early, we had some guys come in, and we ended up closing at noon. My sister, Jen, wanted to get home, we gave it a good try. We had about three, three-and-a-half hours in, she followed me. I have a plow on my truck, but wasn't cutting in it. So we got over to her neighborhood over in Briercliff, we got her over there, but couldn't make it in from either entrance. We ended up battling for a few hours, just came back to the shop, she came up, stayed at my place. Then I said, 'I had nothing going on anyway, so why not jump in the loader?'

"I think I had 13 hours in on Saturday, and went back up did another 12 hours on Sunday."

For Jennifer Kuhn, co-owner with her brother at Hamburg Overhead Door, she has never been more thankful that they own a big piece of equipment like a loader that they use to plow out their driveway and parking lot.

"When we tried to get me home from the office on Friday and couldn't do it in his pickup truck with a plow, he said, 'Don't worry, stay at my house tonight. We'll come back with the loader on Saturday.' If he hadn't done that, there's no way that I would have been able to get home, nor would the Town of Hamburg been able to get into my neighborhood. It was so bad," said Kuhn. "The weight of the snow was so heavy, there was nothing else that would have gotten in there." 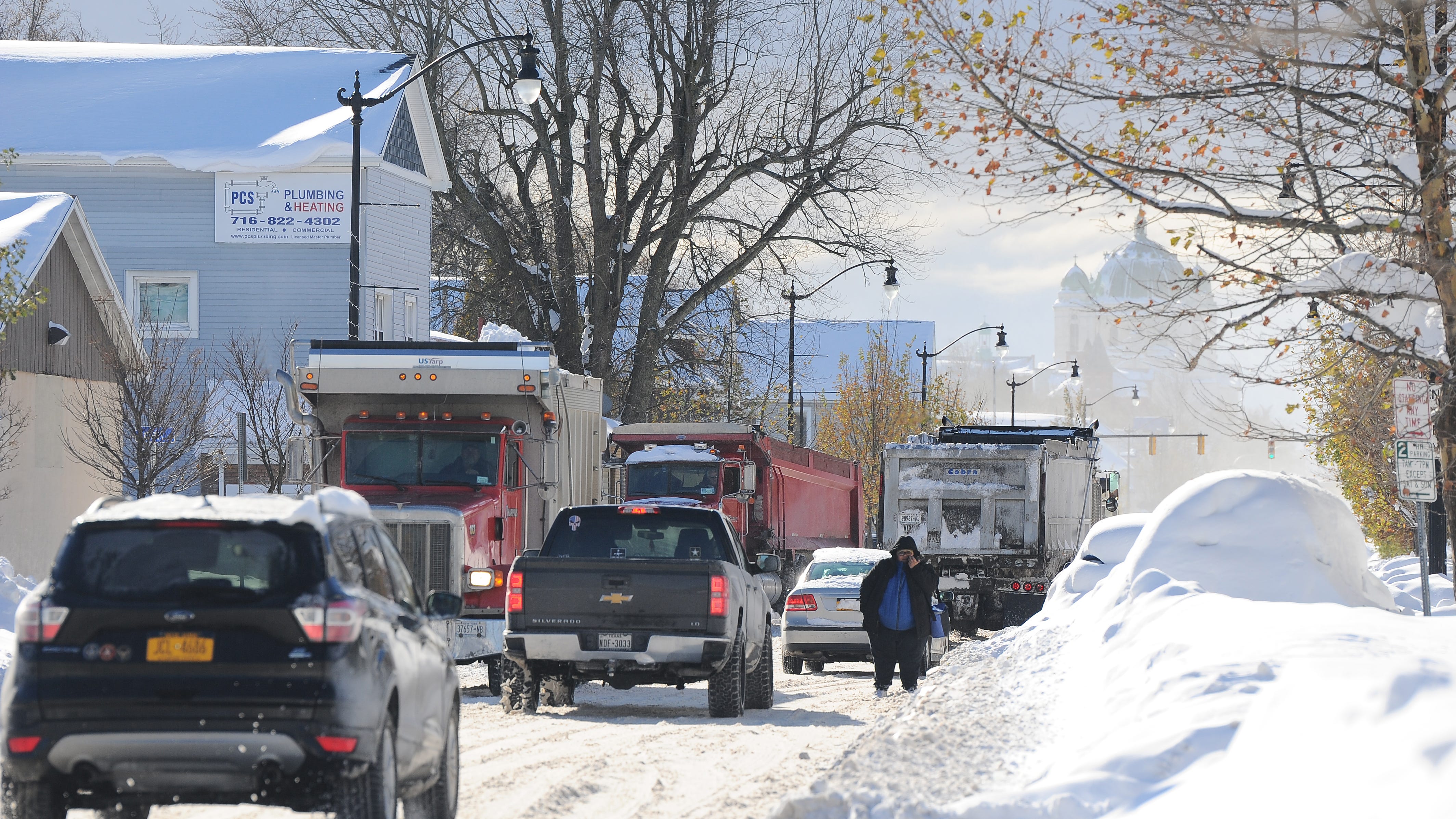 After clearing out Jen's driveway and street of the snow to allow her to get home, Jason then decided to take a drive with the loader, and noticed other people struggling to dig out from the deep, heavy snow.

"I would make a pass by and do what I can. Some didn't really want a lot of help, they just wanted the ends of the driveway cleared out by the road," said Kuhn.

In all, Kuhn guestimates he had plowed out 25-28 driveways and parking lots with his loader over the span of three days helping out in Hamburg. He adds that a majority of the people he helped clear out their property were ecstatic to see some heavy-duty equipment coming to the rescue.

"There were smiles, waves, I was offered sandwiches, couple of bottles of whiskey people gave me. They were offering whatever they could," Kuhn said. "I wasn't out there any reason to go make the money. I ended up doing a couple of parking lots [Monday] for people we knew too. Between the whole time, I used, I think, $500 in fuel. Don't get me wrong, it's a lot, but at the same time, these people weren't getting out any other way. I had nothing to do, I was out just cruising around, enjoying it. I'd be sitting at home on the weekend trying to find something else to do. So it was cool just to kind of go out and be part of it and help clean up."

When Jen Kuhn's neighbors had caught wind to her brother being out-and-about helping the cleanup efforts, she started getting phone calls about his services.

"Myself, especially, but my neighbors and other businesses that he was able to help out have been so appreciative. He did it out of the good of his heart, and he enjoys this kind of thing. He didn't do it for the money."

While Jason Kuhn wasn't out helping people for the money, he says a majority of folks were insistent on compensating him somehow. That's when he started to change his tone.

"My answer was, 'Whatever you want to do. I'm here just to do it, but anything you want to give.' I have just over $3,000," Kuhn said. "I asked my wife one morning, 'What am I gonna do if these people want to pay me? I don't want to take their money, but they're very insistent, they get pushy.'"

His solution to the money donated to him: Help families that could use some help for the holiday season.

"I'm not a guy that likes to buy gift cards for people, because I feel the gift card could be spent somewhere else. The parent could take it, something along those lines. Kids that need something. If they have a list that they want to send over, I have enough to do more than a few kids. That's what I'd like to do," Kuhn said. "I was always fortunate growing up, I don't need nothing myself. My kid doesn't need nothing, she's got everything she needs. So whatever we can do to help some families to go get some toys so kids can have something to open up on Christmas."

Upon hearing the intentions of her brother's earnings from clearing out people's driveways, Jen Kuhn says it didn't surprise her one bit.

"Owning a business has afforded us to have things like this big payloader, and to be able to help people with it," she said. "I know not everybody can do that, but we're in a position where he can take that money, and when he said he wanted to buy Christmas presents for kids that need it, I mean, I just got all choked up when he said that. But that's what we do. He's amazing, and that's how our parents raised us. That's what we do with the business, and we're very fortunate we can do that."

When looking back on the weekend of work that was for Kuhn, he continues to stress the fact he was only out there for fun, and was willing to do whatever to help those who asked.

"I didn't have any purpose to go out there and say, 'Hey, $300 a driveway and pay me for this and that.' I had some people that could only give me $20, and I don't care. That wasn't the point of it," Kuhn said. "Some gave me more, some gave me less, I'm assuming that's what they felt they had or what they could afford. Others were a simple smile and a thank you, and tears in their eyes that someone was there to help them, at least, get out of their house."

Hear more of our conversation with Jason Kuhn available in the player below: