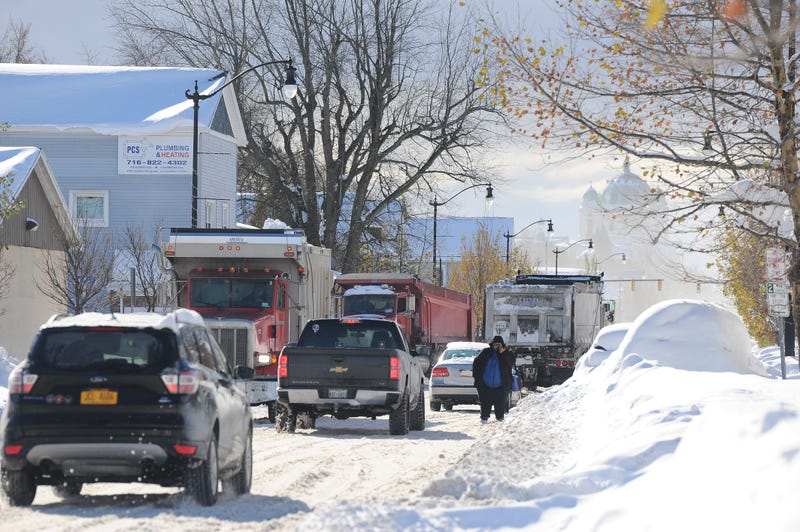 Buffalo, NY - November 20: Trucks and loaders attempt to clear streets after an intense lake-effect snowstorm that impacted the area on November 20, 2022 in Buffalo, New York. Around Buffalo and the surrounding suburbs, the snowstorm resulted in up to six feet of accumulation and has been attributed to at least three deaths. The band of snow is expected to weaken overnight with milder temperatures expected. Photo credit (Photo by John Normile/Getty Images)
By Tim Wenger, WBEN.com Newsroom

Buffalo, N.Y. (WBEN) - It's been a trial by fire for newly confirmed Buffalo Commissioner of Public Works Nate Marton as he navigates city snow removal crews through the daunting task of removing as much a 4 feet of snow in sections of the southern portion of the city.

"We're working as hard as we can," Marton told WBEN when asked if he is frustrated by the fact that many residents are raising concerns that snow is still blocking access to and from their properties. "I think it's understandable," he said.

Marton describes the efforts across South Buffalo, Kaisertown and Lovejoy as a snow removal effort, not a plowing effort. "Scoop by scoop," is how Marton describes the tedious operation of removing the snow. He tells residents in those parts of the city they may not see a plow on their street, but they should have seen front loaders and heavy equipment being used to remove the mountains of snow that is being taken via dump truck to four locations in the city.

"Car to curb," is the goal of the operation, Martin says, as he says snow is removed from the edge of a car to the curb across the street. About 40 to 45 percent of the streets in the high impact neighborhoods have reached that point, he says.

Despite special attention being given to sidewalks and school walking routes, Buffalo Schools have reversed an earlier decision to reopen Wednesday and have now decided to remain closed Wednesday and through the Thanksgiving holiday.

Marton also acknowledges the new GPS tracking system is not fully operating and says the city is working with the vendor. He also reminds residents that the GPS tracking is not available on the borrowed equipment being used in the snow removal effort.

Reminder from the City of #Buffalo beginning today! pic.twitter.com/uhq0Ra9aXM