Buffalo, N.Y. (WBEN) - Plans are now in motion to establish a permanent memorial site for the victims of the mass shooting at the Tops on Jefferson Avenue more than six weeks ago.

New York Gov. Kathy Hochul was in town on Saturday to announce $50 million worth of investments in the East Buffalo community in the wake of the Tops mass shooting on May 14.

In addition to the announcement of future investments on Saturday, Gov. Hochul also announced plans for a special 5-14 Memorial Commission that will be headed by Buffalo Mayor Byron Brown. Under the team assembled by the Mayor, the commission will come up with a lasting way to commemorate the 10 lives lost in the racially motivated shooting on that fateful Saturday.

"[It was] very, very important to our Mayor how we memorialize the lives of those we lost. Each person was not just a name or a number. It is a person, a personality, an individual behind it, a family. A person who had an impact while they lived here in this community. We need to honor that and celebrate that," said Gov. Hochul during Saturday's press conference at the Apollo Theatre. "A huge important priority for Mayor Brown, and therefore it's important to me, is to establish a 5/14 commission, and allow the Mayor to convene the stakeholders and have them develop a plan to properly memorialize that day and those individuals going forward, forever." 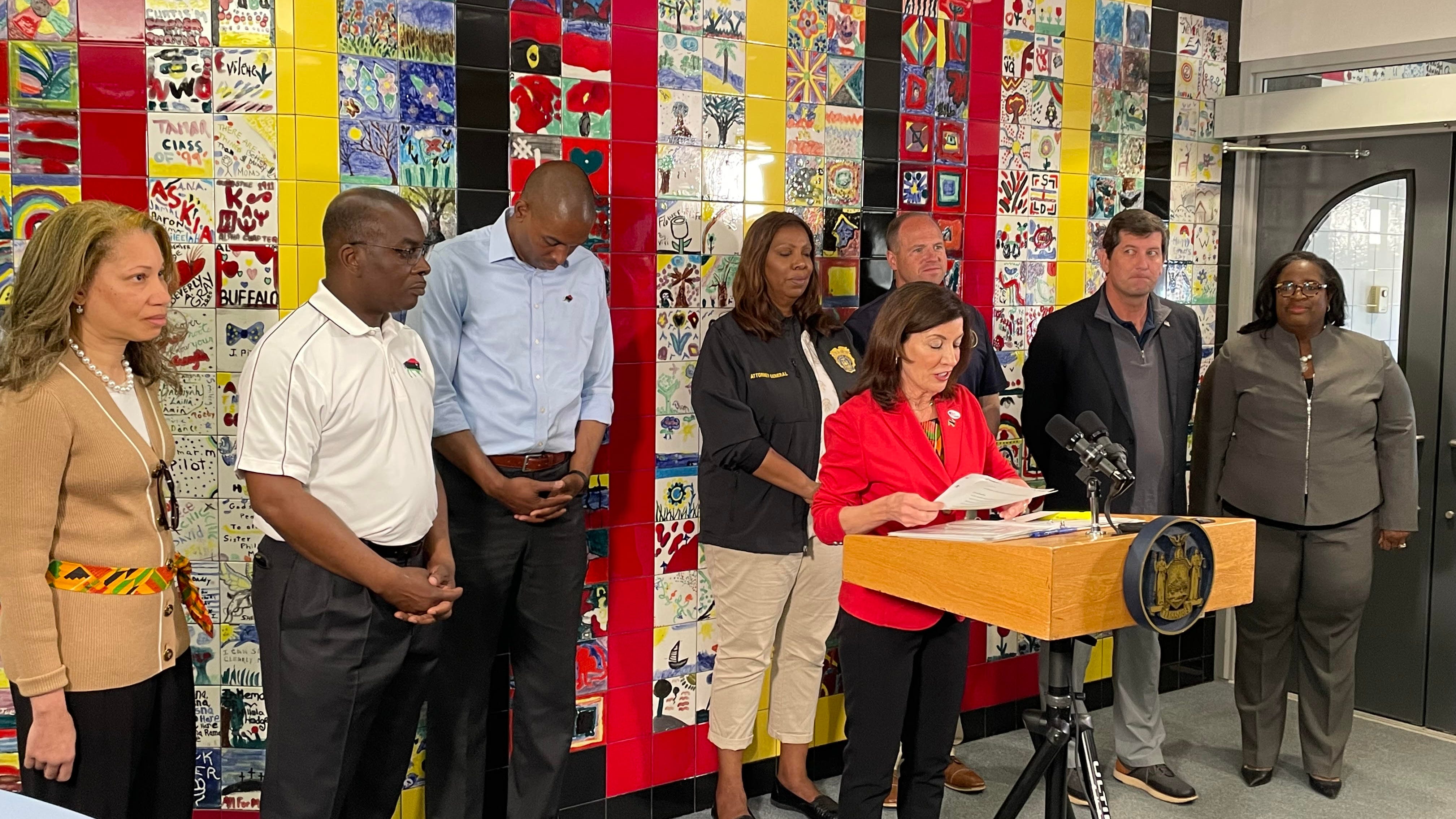 "I talked to the Governor about the importance of this. We had been hearing from members of the community about the importance of memorializing the 'Buffalo 10', remembering the 'Buffalo 10'. Never forgetting the precious lives that were lost, but doing it the right way," added Mayor Brown on Saturday. "Doing it with the families of the victims, with the survivors of the massacre, with people who are grieving and hurting in the community, businesses on Jefferson Avenue, and doing something that will be lasting, that will be fitting for the memory of those precious lives that were lost."

As it still stands from the day the shooting took place, the current memorial site stands at the corner of Jefferson Avenue and Landon Street that was established by members of the community. Over the several days and weeks that followed the incident, the site grew substantially with flowers, photos, doves and other items to commemorate those who perished.

According to the Mayor, he will be making his announcement of the composition of the 5/14 Memorial Commission in the coming days.

"I thank the Governor for her tremendous support for this effort, for a commitment of resources and technical expertise for this effort," Brown said. "Like these investments that the Governor has announced [Saturday], this will be a community-driven effort. We will involve the families, the members of the community, and this will be done right so it is a fitting and lasting tribute and memorial to the 10 innocent victims of that mass shooting that occurred on 5/14."

"This is my home. This is deeply personal to me, and I have seen the specter of segregation and racism," Hochul, a Buffalo native, added. "We are going to continue eradicating the core purposes, why it exists, try to change the hearts and minds, but also eradicate the injustice that still lives today."

Mayor Brown believes it's a staple for the future of a permanent memorial site on Jefferson Avenue to be driven by the community. Not only will that include the voices of the families of the victims, but it will also be listening to survivors of the shooting, members of the community, and others to come up with something that will properly recognize and honor the lives lost.

While the announcement of the commission could come some time in the next little bit, Mayor Brown says that any final decisions on the site cannot be rushed. They want to make sure the commission and all the other parties involved get it right.

Another member of local government that has been consulted on the future of the memorial site at the Tops on Jefferson Avenue includes New York Assembly Majority Leader Crystal Peoples-Stokes. While she's been aware of the Mayor and Governor's talks, she thinks its very commendable and honorable that others have voiced their concerns and thoughts on the site.

"It is my sincere hope and desires that decisions about a memorial are not decided without community input," said Peoples-Stokes on the matter. "Whatever it is that the community decides they want to do, then I will get to work trying to figure out how to make it happen."

It is expected for the Tops location on Jefferson Avenue to be re-opened some time in late July. As the community continues to wait on a future announcement of the re-opening, Assemblywoman Peoples-Stokes believes it's the right decision to get that Tops location back open for the community.

"I've heard some people saying that the Tops should never be opened and a memorial should be put there. I don't agree with that position," she explained. "I think we need to market sooner than later, and I'm glad to hear that Mr. [John] Persons and his team are working to transfigure the location so that it doesn't look the same, but that it is available to provide fresh foods and vegetables for people by, hopefully, the end of July, middle of August."

During this past weekend's Juneteenth festivities in Buffalo, it was also a time for people to reflect on what happened on May 14 and remember the victims who lost their lives at the hands of racism. However, with the help of the permanent memorial site, local leaders are hopeful that the lessons learned will extend well beyond the Buffalo community, and far past Juneteenth weekend.

"Here in Buffalo, we will never forget what happened on 5/14. We will always remember the lives that were lost in that racially motivated attack. We will remember the survivors of the attack, we will remember the family members. But we also want the nation to remember, we want the world to remember, because remembrance is important to events like [what] happened in Buffalo to be prevented from happening again in other parts of the country," Mayor Brown said.

"I think it's important just to never forget," Peoples-Stokes added. "It's kind of like we never forgot when terrorists came from other countries and attacked America. We should never forget when domestic terrorism attacks our communities either. So we should just never forget. We should always honor the memory, support the people who are still hurting. A number of people have said this today. It takes a while to heal from the kind of hurt that we've experienced, and give people that freedom to do it without being judgmental."