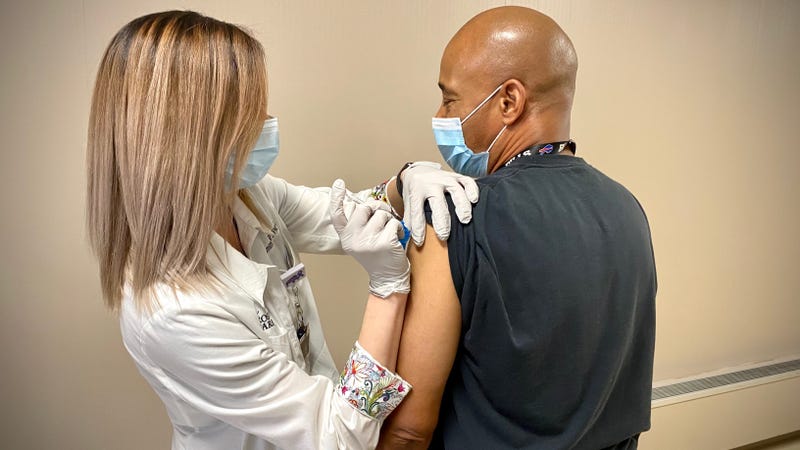 Buffalo, nY (WBEN) - As the monumental process unfolds to vaccinate millions of Americans, a new study finds more than three-quarters of Erie County residents are willing to get the COVID vaccine if offered to them.

The COVID-19 Symptom Survey, which is conducted by the Delphi Group in partnership with Facebook Data for Good, partnering with Carnegie Mellon University and the University of Maryland, found 76 percent of Erie County residents were willing to get the COVID vaccine. "Vaccine acceptance across the country and around the world is variable," says Facebook's Laura McGorman. "In some parts it';s 50 percent of the people, and in others it's 99 percent. So, we have a lot of educating to do about how the vaccine is safe and effective if we want herd immunity in the next several months."

Nationwide, McGorman says among health care workers, 60 percent of men have received the vaccine, while only 50 percent of women have. "As more and more people get vaccinated, and the further along we get to roll out the vaccine, the issues of hesitancy will be a big blocker in reaching herd immunty," says McGorman. She says age groups, there isn't a big difference between seniors and younger folks in getting the vaccine. "The young population is open to getting the vaccine," notes McGorman.

McGorman says among people who are hesitant, they prefer to hear information locally. "It would be effective for them to hear from a local health care worker. They're also likely to hear about the effectiveness from friends and family," says McGorman.

Dr. Bruce Troen of UB says the numbers are encouraging. "The numbers show as the vaccine rollout has proceeded, the willingness of people to get the vaccine is increasing, and I think people are continually aware of the increasing death count," says Troen, who notes there's a long way to go to get the other 25 percent to get vaccinated.

What will it take? Troen says that has a nuanced set of answers. "It's not just about whether people believe the vaccine is effective. It goes back historically as to how some groups feel about health care," says Troen. He notes some groups were tested unethically, noting the Tuskegee trial for syphilis treatment for African-Americans. "In addition, there are many people who come from overseas, and they have a very different approach as to how physicians can treat them," says Troen. He says it's a matter of having leaders in the community can get vaccinated, and show the benefits outweigh the disadvantages.

Troen says it's a question of what's been done to generate the vaccine. "It's been rapid, but the testing has been expansive. There have been hundreds of thousands of people who have been put through randomized control trials," says Troen. "Even though it's gotten a lot of press through the Warp Speed program, I look at this carefully, and I don't see any corners have been cut."