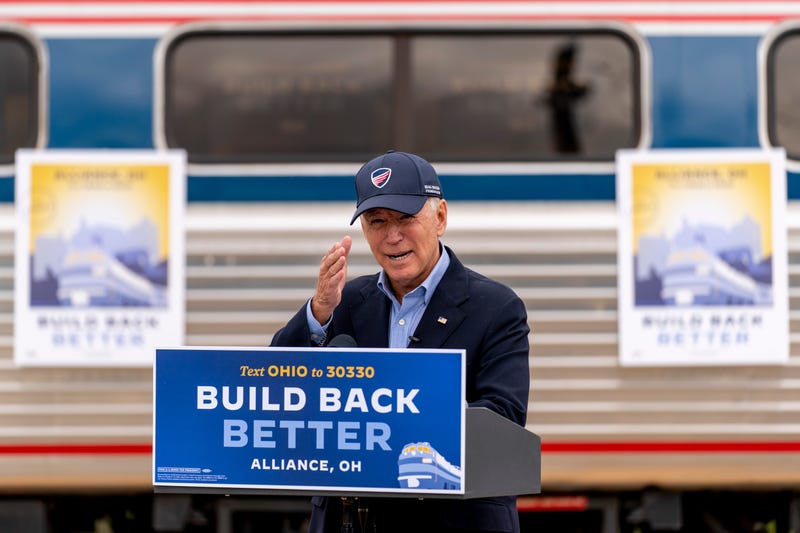 PITTSBURGH (AP) — President Donald Trump and Democrat Joe Biden kept up their debate-stage sniping from the road and the rails, fighting for working-class voters in the Midwest while both parties — and the debate commission, too — sought to deal with the most chaotic presidential faceoff in memory.

The debate raised fresh questions about Trump's continued reluctance to condemn white supremacy, his questioning the legitimacy of the election and his unwillingness to respect debate ground rules his campaign had agreed to. Some Democrats called on Biden on Wednesday to skip the next two debates.

Biden's campaign confirmed he would participate in the subsequent meetings, as did Trump's. But the Commission on Presidential Debates promised “additional structure ... to ensure a more orderly discussion of the issues."

Less than 12 hours after the wild debate concluded, Biden called Trump's behavior in the prime-time confrontation a “a national embarrassment." The Democratic challenger launched his most aggressive day on the campaign trail all year, with eight stops on train tour that began mid-morning in Cleveland and ended 10 hours later in western Pennsylvania. Trump proclaimed his debate performance a smashing success during a Wednesday evening rally in Duluth, Minnesota.

"Last night I did what the corrupt media has refused to do," Trump said. “I held Joe Biden accountable for his 47 years of failure.”

Biden balanced criticism of Trump with a call for national unity.

“If elected, I’m not going to be a Democratic president. I’m going to be an American president," Biden said at the Cleveland train station. As his tour moved into Pittsburgh, he accused Trump of never accepting responsibility for his mistakes and promised, “I’ll always tell you the truth. And when I’m wrong, I’ll say so."

While some Republicans feared that Trump's debate performance was too aggressive, he gave himself high marks as he left Washington. He had spent much of the day assailing Biden and debate moderator Chris Wallace on social media.

“If you ever became president you have to deal with some of the toughest people in the world,” Trump said at his Duluth rally. “And Chris Wallace is very very easy by comparison.”

The first of three scheduled debates between Trump and Biden deteriorated into bitter taunts and chaos Tuesday night as the Republican president repeatedly interrupted his Democratic rival with angry jabs that overshadowed any substantive discussion of the crises threatening the nation.

Trump and Biden frequently talked over each other, with Trump interrupting, nearly shouting, so often that Biden eventually snapped at him, “Will you shut up, man?”

Trump refused anew to say whether he would accept the results of the election, calling on his supporters to scrutinize voting procedures at the polls — something that critics warned could easily cross into voter intimidation.

Trump also refused at the debate to condemn white supremacists who have supported him, telling one such group known as the Proud Boys to “stand back and stand by.” Asked directly on Wednesday if he welcomed white supremacist support, he first said only that he favored law enforcement but when the questioner persisted, he said he had always denounced “any form of any of that.”

Utah Sen. Mitt Romney called the debate “an embarrassment” and said Trump “of course” should have condemned white supremacists.

“I think he misspoke,” said South Carolina Sen. Tim Scott, the only Black Republican senator. “I think he should correct it. If he doesn’t correct it, I guess he didn’t misspeak.”

Trump did not say he misspoke when asked on Wednesday but claimed he did not know who the Proud Boys were.

“They have to stand down — everybody. Whatever group you’re talking about, let law enforcement do the work,” he said.

The president's brash debate posture may have appealed to his most passionate supporters, but it was unclear whether the embattled incumbent helped expand his coalition or won over any persuadable voters, particularly white educated women and independents who have been turned off in part by the same tone and tenor the president displayed on the debate stage.

With just five weeks until Election Day and voting already underway in several key states, Biden holds a lead in national polls and in many battlegrounds. Polling has been remarkably stable for months, despite the historic crises that have battered the country this year, including the coronavirus pandemic that has killed more than 200,000 Americans and a reckoning over race and police.

While Biden distanced himself from some of the priorities of his party's left wing — and Vermont Sen. Bernie Sanders — on Tuesday night, there was no sign that he had turned off his party's grassroots activists.

Sanders said Wednesday on ABC's “The View” that it was “terribly important” that Biden be elected, and campaign digital director Rob Flaherty said Biden had raised $3.8 million at the debate's end in his best hour of online fundraising

Increasingly, the candidates have trained their attention on working-class voters in the Midwest, a group that helped give Trump his victory four years ago and will again play a critical role this fall.

Biden and his wife, Jill, traveled through Ohio and Pennsylvania aboard a nine-car train bearing a campaign logo, a throwback to Biden's days as a senator when he commuted most days via Amtrak from his family's home in Delaware to Capitol Hill.

He drew several hundred masked supporters to one afternoon stop in Greensburg, Pennsylvania, his largest crowd since suspending traditional events back in March, according to his campaign.

Biden wrapped up his train trip with a nighttime drive-in rally in Johnstown, Pennsylvania's poorest town. The campaign blocked off the surrounding street and erected a stage and giant screen. About 50 cars were arrayed around the area, with most attendees standing near their vehicles or sitting on the hoods and roofs. They stood close together in small groups, but nearly everyone wore masks.