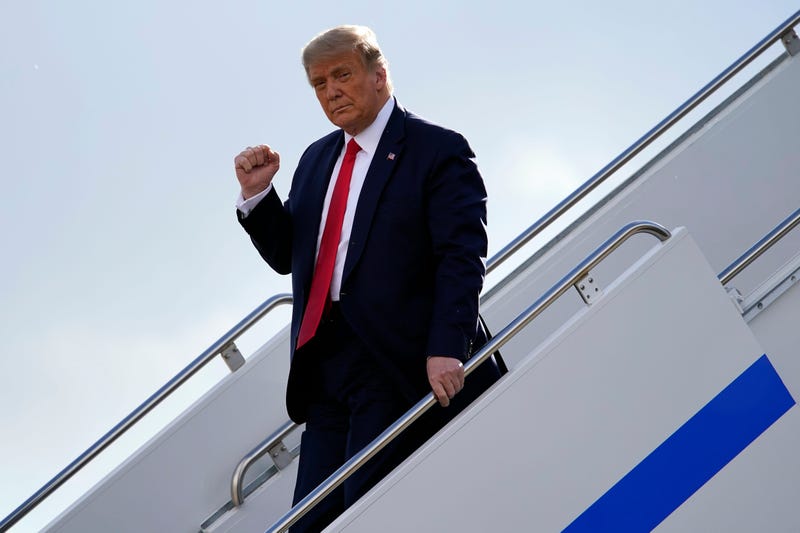 CHICAGO (AP) — It's almost as if he's writing a personal check.

In recent days, President Donald Trump has promised millions of Medicare recipients that — thanks to him — they'll soon be getting an “incredible” $200 card in the mail to help them pay for prescriptions. He's called himself “the best thing” that ever happened to Puerto Rico, while releasing long-stalled aid. Trump has also taken to showcasing the $28 billion he “gave” to farmers hard hit by the trade war with China.

“What I’ve done for them, with the $28 billion for the farmers, and that includes you,” Trump told supporters at a rally in Newport News, Virginia, last week — without mentioning that the aid was needed to offset the hit farmers took from his trade standoff with China. “That includes tobacco, that includes a lot of things, but that includes your farmers.”

As Trump talks up heaps of federal aid flowing to key constituency groups in the lead-up to the November elections, he rarely mentions Congress' role in the appropriation of those dollars.

The president was in the battleground state of North Carolina last week when he proposed the idea of $200 drug cards for Medicare recipients — a move that comes as polls show slipping support for the president among older voters. Government officials say key details, like when and how the drug benefit would be paid for, are still being fleshed out.

“I will always take care of our wonderful senior citizens,” Trump said. “Joe Biden won’t be doing this."

Earlier in September, Trump used a rally in northern Wisconsin, a battleground he narrowly won in 2016, to announce another $13 billion in pandemic aid to assist farmers. That came after Trump announced the release of $13 billion in assistance to repair years-old hurricane damage in Puerto Rico and pledged to restore its economy.

He didn’t mention his past harsh comments about the island and its leaders as he looks to curry favor with Puerto Rican voters elsewhere in the U.S., particularly in crucial Florida.

“I’m the best thing that ever happened to Puerto Rico,” Trump said without a trace of irony. “No one even close.”

On Wednesday, he spoke in personal terms at a rally in Duluth, Minnesota, about his decision to sign an executive order declaring a national emergency in the mining industry. It's a step he said would provide “billions of dollars” to the industry and bring “countless” jobs to the state's Iron Range.

“I will always protect Minnesota,” said Trump, who is looking to add the historically Democratic-leaning state to his win column on Nov. 3. “It’s been very good to me.”

Trump was also happy to have his name splashed on checks when the U.S. Treasury earlier this year sent economic stimulus payments to millions of Americans struggling during the coronavirus. It was the first time a president’s name appeared on any IRS payments, whether refund checks or other stimulus checks that have been mailed during past economic crises.

Ross Baker, a congressional scholar at Rutgers University, said Trump's approach to legislation is much like his style in the real estate world: In the end, he always wants to plaster his name on the finished product.

“It’s Donald the entertainer,” Baker said. “It’s one of the things that he learned from reality television that he’s applied pretty directly to the power of the presidency.”

Trump isn't the first incumbent president to work the levers of government to his advantage ahead of an election.

As Democrat Barack Obama ramped up his 2012 reelection campaign, he used the backdrop of the battleground state of New Hampshire to press Republicans to get behind an extension of a temporary payroll tax cut that was set to expire.

Republican George W. Bush traveled to Iowa weeks before the 2004 election to sign legislation that lowered taxes for millions of middle-class Americans. But even as Bush highlighted the legislation in a state that he would narrowly win, he also thanked Democratic lawmakers for their support of the bill.

Ahead of the 1996 Democratic National Convention, Bill Clinton signed a 90-cent hike of the minimum wage into law, legislation to improve access to health insurance and a controversial bill overhauling the welfare system as he sold himself to the electorate as a pragmatist governing from the middle.

Matt Bennett, an aide in the Clinton White House who served on both of the former president’s White House campaigns, said there is little evidence that the last-second entreaties of past presidents had significant impact at the polls. And he's doubtful there are many voters whom Trump is trying to reach who haven’t already made up their minds.

“The cake is pretty baked at this point," Bennett said.

The Trump campaign did not respond to a request for comment.

Trump in recent weeks has taken the election-year courting of key constituencies to a new level as he uses rallies and official White House events for showy pronouncements, sometimes at odds with the facts.

One frequent boast is that his signing of a China trade deal earlier this year is straightening out decades of imbalance between the two nations. In fact, Commerce Department data shows that U.S. exports to China were down in the first seven months of this year.

“I’ve taken in billions and billions of dollars from China,” Trump recently told reporters. “No other president has done what I’ve done. I’ve given much of it to the farmers."

Even when he’s not doling out money, Trump — in the final lap before Election Day — has taken to dangling other benefits for key voter groups.