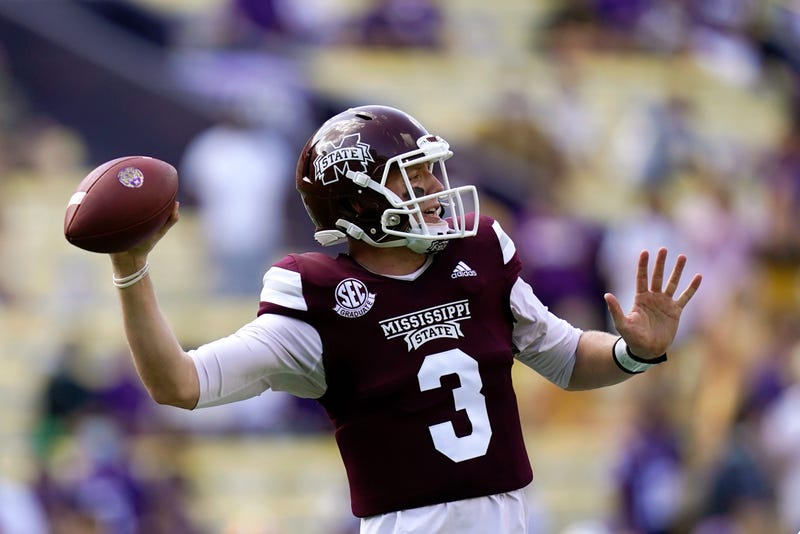 BATON ROUGE, La. (AP) — New Mississippi State coach Mike Leach put his “Air Raid” offense in the hands of a transfer quarterback who showed up over the summer and the results were like nothing defending national champion LSU or the Southeastern Conference has ever seen.

K.J. Costello passed for an SEC record 623 yards and five touchdowns and the Bulldogs knocked off sixth-ranked LSU 44-34 on Saturday.

“I don’t know if any individual could visualize this taking place,” said Costello, who was Stanford’s starter in 2017 and 2018 before head and hand injuries sidelined him last season. “I wasn’t visualizing sitting here breaking records. ... I’m excited about the potential that this offense has because, believe it or not, we did leave a lot on the field today.”

Costello's passing yardage in his first game since moving from Silicon Valley to Starkville, Mississippi, eclipsed the 544 yards Georgia's Eric Zeier had against Southern Mississippi in 1993 to set the conference record.

And Costello needed most of it to make up for his two interceptions and two lost fumbles, which helped LSU rally to tie the game at 34 before he engineered two late scoring drives.

“With this group, I don’t feel like we ever lose momentum,” Costello said. “I feel like we’re always in the attack mode. That’s just Leach’s philosophy.”

LSU became the first defending national champion to lose its opening game since Michigan in 1998 lost at Notre Dame and had its 16-game winning streak, the nation's best, snapped.

“Coach Leach had his team ready to play. They beat us. We have no excuses,” LSU coach Ed Orgeron said. “I told the team to put this on me. I've got to coach better.”

LSU quarterback Myles Brennan intermittently showed promise in his debut as starter in place of 2019 Heisman Trophy winner and top NFL draft choice Joe Burrow. But Brennan's 345 yards and three touchdowns passing could not make up for the trouble the Tigers' inexperienced defense had in new coordinator Bo Pelini's scheme.

“We couldn’t stay with those guys,” Orgeron said. “Too many missed assignments. Too many guys running free, getting beat one on one. We have to look at whether or not we can cover man to man. If we can’t, we are going to have to play more zone.”

Four of Costello's touchdown passes covered between 24 and 75 yards. The longest came on Kylin Hill's catch and run in which the running back slipped safety Todd Harris' tackle along the sideline. Osirus Mitchell caught touchdown passes of 43 and 24 yards, the second putting the Bulldogs back up by two scores with 3:39 left.

It was "embarrassing” for a program known as DBU, said LSU safety Jacoby Stevens. “It’s like going into a boxing ring and getting knocked out.”

Leach said he was confident his “Air Raid” offense could work in the mighty SEC, because it has before. He was an assistant under Hal Mumme at Kentucky two decades ago when Tim Couch and the Wildcats were setting records.

“There’s a lot of offenses that if people are just kind of really committed to the philosophy and you attack the field and you execute, are good offenses," Leach said,

"I don’t think it’s some special secret plays as much as you constantly work every day to execute what you do.”

LSU's Terrace Marshall Jr. had touchdown catches of 37 and 33 yards. Freshman tight end Arik Gilbert leaped in front of a defender to turn Brennan's desperate throw as he was going down into a 2-yard score.

But Brennan struggled to make quick and decisive reads. He was sacked seven times. The first of his two interceptions came when linebacker Jordan Davis hit the QB's elbow as he threw. The ball went straight to cornerback Esaias Furdge at the Bulldogs 24.

LSU played without two of three returning starters on defense, including one of the top players in the nation. All-America cornerback Derek Stingley, who also returns punts, was hospitalized overnight Friday after falling “acutely ill,” LSU said. LSU spokesman Michael Bonnette emphasized that the illness was not COVID-19 and added Stingley was expected to rejoin the team after being evaluated by physicians. Senior defensive tackle Glen Logan also was scratched from the lineup unexpectedly and with no explanation.

Mississippi State: The Bulldogs could not have asked for a much better start to the Leach era. If teams around the SEC weren't taking the “Air Raid” seriously before, perhaps they better now.

LSU: The Tigers' loss of prominent personnel — including 14 players taken in the NFL draft — and lack of experience on the field was exposed during pivotal moments of a tense opener. In terms of talent, LSU appears to have plenty of upside, but time will tell how long it takes to be realized.

“First off, losing sucks,” Brennan said. “We can sit here and point fingers, but that is not going to do anything. We've just got to move forward.”

LSU is bound to plummet after giving up so many yards and points at home. Mississippi State, meanwhile, has made its case to crack the AP Top 25.