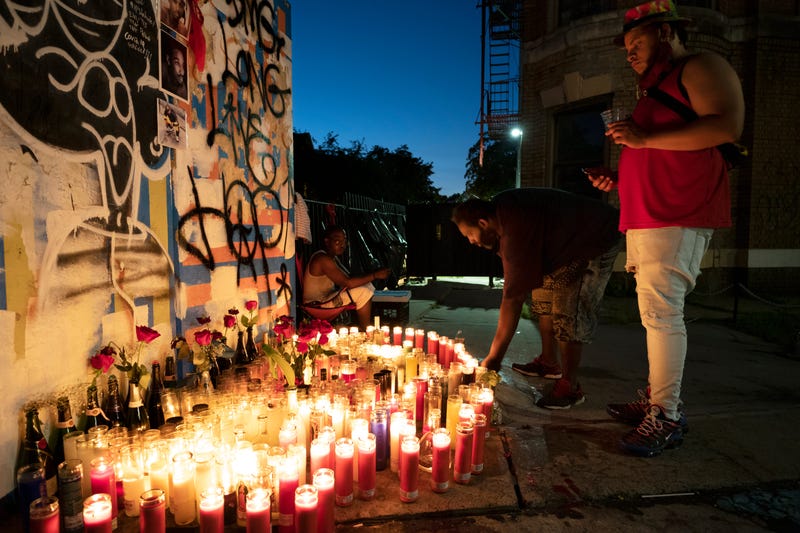 Photo credit FILE - Friends of Wesley Green light candles at a sidewalk memorial for him, July 28, 2020 in the Ditmas Park neighborhood of New York. Green, 32, was shot and killed near his home the day before. Police recorded 280 killings through Aug. 23. By comparison there were nearly 2,300 murders in New York City in 1990 and in 2000 the number was 673. (AP Photo/Mark Lennihan)
By The Associated Press

At almost every turn at the Republican National Convention, speakers from the president on down portrayed American cities like Portland, Oregon, New York and Chicago as lawless Democratic wastelands that have been overrun with violence, looting and destruction that is forcing residents to flee for safer locales.

The reality on the ground is much more nuanced.

In downtown Portland this week, tourists from Texas enjoyed gyros at a food cart, a couple from the suburbs soaked up the afternoon sun and a recent transplant from Indiana strummed an acoustic guitar outside a shuttered Apple store, in front of a mural that’s dedicated to Black people killed by police.

“It’s a pretty day and we feel just perfectly safe as long as we’ve got our masks on,” said Benjamin Green, a warehouse forklift operator from Beaverton, Oregon. “I don’t see why there’s any need to be scared to walk around out here.”

The picture of American cities overwhelmed by violence has become a central theme of the 2020 presidential race. In his convention acceptance speech Thursday night, President Donald Trump called for “law and order” and said the country can never allow “mob rule.” But for the most part that portrait doesn't line up with reality.

In Portland, protests have played out for more than 90 consecutive nights, frequently ending with vandalism. Hundreds of people have been arrested. But the disruption is mostly concentrated in small pockets of the city.

In those spots, including the two blocks around the federal courthouse and around some police precincts, graffiti is common and stores and restaurants are open, but boarded up. Downtown businesses this week urged the mayor to do more to address the problems.

In contrast, most neighborhoods in the city of nearly 700,000 people are untouched by the violence. Parks attract young families and joggers, and bars and restaurants cater to customers with outdoor seating areas spaced out for COVID-19.

“It seems business as usual," said Garrett Martin, who was visiting downtown from Fort Worth, Texas, with his fiancee. “We’ve been to a few shops. It’s just the same regulations as everywhere else -- we have to wear masks.”

Experts say violent crime has generally remained stable and low. Still, homicides and shootings are on the rise in many cities, but experts say it's too soon to say whether the trend will continue, or what's driving it. Double-digit unemployment, frustrations over the pandemic and tensions over police violence could all be factors.

In many major cities, there was looting and some property destruction during the height of the George Floyd racial justice protests, but order was restored months ago in most places.

David Abrams, a professor at the University of Pennsylvania, created a database tracking crime statistics in about 25 major cities during the pandemic.

The numbers are nuanced: overall violent crime is down, but there have been increases in homicides and shootings over the summer. For the first half of the year, he said, homicides were up 20% in the cities they follow.

Abrams cautions that it can be misleading to focus on crime statistics over a short time frame, such as week-to-week or month-to-month.

“If you look at a