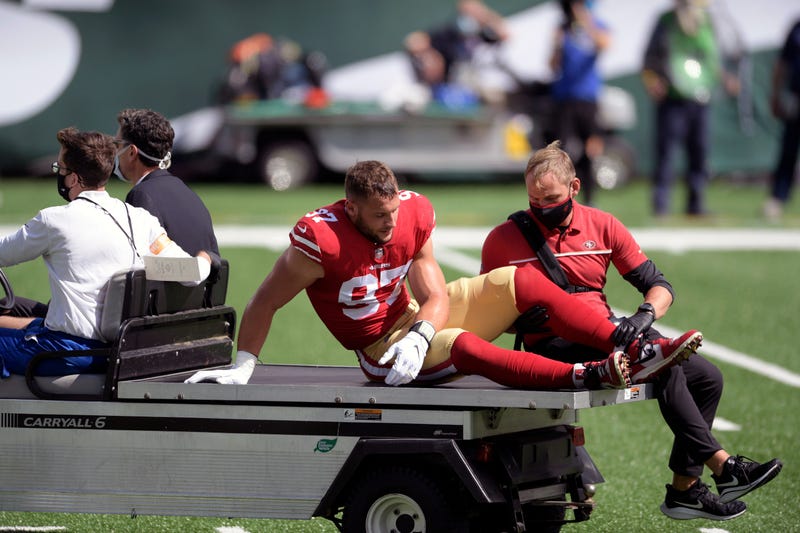 Photo credit San Francisco 49ers defensive end Nick Bosa (97) is driven off the field after being injured during the first half of an NFL football game against the New York Jets Sunday, Sept. 20, 2020, in East Rutherford, N.J. After losing four players to knee injuries last week against the New York Jets, the Niners complained about a “sticky” new turf at MetLife Stadium and expressed some concern about returning to the same field a week later. (AP Photo/Bill Kostroun, File)
By The Associated Press

The NFL Players Association president cited the league’s official injury reports from 2012-2018 to state his case that natural grass fields provide a much lower risk for injuries, compared to artificial surfaces, during practices and games.

The analysis shows that players have a 28% overall higher rate of non-contact lower extremity injuries on turf. Non-contact knee injuries occur at a 32% higher clip and non-contact foot or ankle injuries are 69% percent more likely on artificial fields.

“The data stands out and the numbers are staggering in the difference in injury rate,” Tretter said Wednesday. “We all should be working toward the safest style of play, and we know the dangers of playing on turf.

Tretter, who detailed the data in his monthly newsletter to union members, spoke extensively on the subject before Cleveland’s afternoon practice at its suburban training facility.

The seven-year veteran was elected NFLPA president on March 10 after winning a three-way election over Michael Thomas of the Giants and Sam Acho of the Buccaneers. He has strongly advocated for player safety while maintaining a diplomatic approach.

“Anecdotally, I know how my body responds playing on turf vers