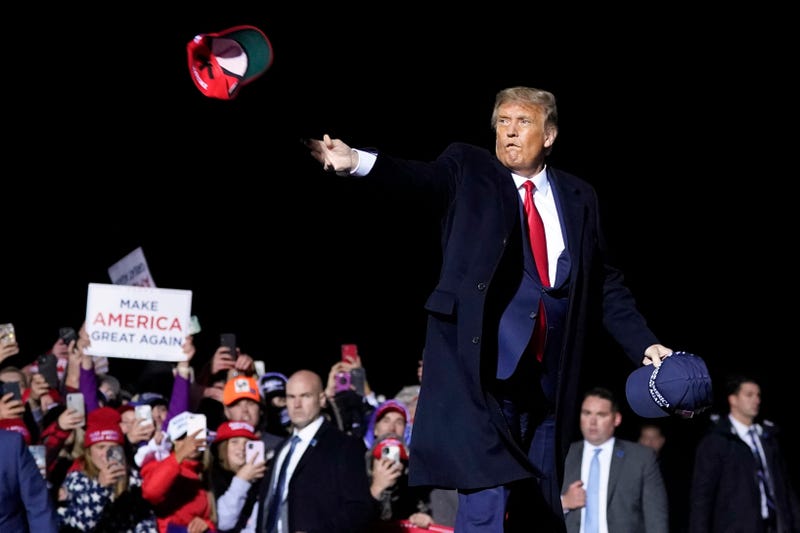 WASHINGTON (AP) — The Latest on the 2020 presidential election (all times local):

President Donald Trump says he “enjoyed” debating former Vice President Joe Biden, but he is falsely claiming that Biden is trying to get of the next two debates.

Trump spoke at a campaign rally in Duluth, Minnesota, Wednesday.

He gloated about the television ratings the debate generated and ignored how contentious and unruly the debate quickly became, in large part thanks to his refusal to adhere to the moderator’s requests and the debate’s rules.

He made no mention of the Commission on Presidential Debates' promise earlier Wednesday to implement “additional structure ... to ensure a more orderly discussion of the issues” going forward.

Trump suggested Biden was trying to get out of the next two debates, but the vice president’s campaign said earlier Wednesday that the Democratic nominee remained committed to taking part in them.

Joe Biden says he’s out to cut into Republican margins of victory, even in parts of the country where he probably won’t defeat President Donald Trump.

The former vice president spent Wednesday on a train tour that started in Cleveland and ended in rural Western Pennsylvania -- but not before taking him through some counties Trump won handily four years ago. Biden said the schedule was no accident.

“I think some we can win back. Others, it’s about cutting the margins,” he said of the strongly Republican areas where he campaigned. “Even if we just cut the margins, it makes a gigantic difference.”

Speaking to reporters before boarding a flight from Johnstown, Pennsylvania, back to Delaware for the night, Biden added that the Democratic Party was long built on the support of union members and the working class, but it has seen that erode as many people have become fed up with politics in general.

He said, “I’ve been out here a lot in my career, an awful lot” and understood that he had to make voters understand that “I see them, I hear them.”

His comments came as Trump was holding his own rally in Duluth, Minnesota.

The Commission on Presidential Debates says it's adding new “tools to maintain order” to the upcoming debates after a chaotic first debate between President Donald Trump and Joe Biden.

Moderator Chris Wallace of Fox News pleaded with Trump several times to allow Biden to speak uninterrupted, to no avail.

The nonpartisan commission has organized every general election presidential debate since 1988. In a statement, the commission said the first debate "made clear that additional structure should be added to the format of the remaining debates to ensure a more orderly discussion of the issues.”

The commission says it “intends to ensure that additional tools to maintain order are in place for the remaining debates.”

And the commission says it's “carefully considering the changes that it will adopt and will announce those measures shortly.”