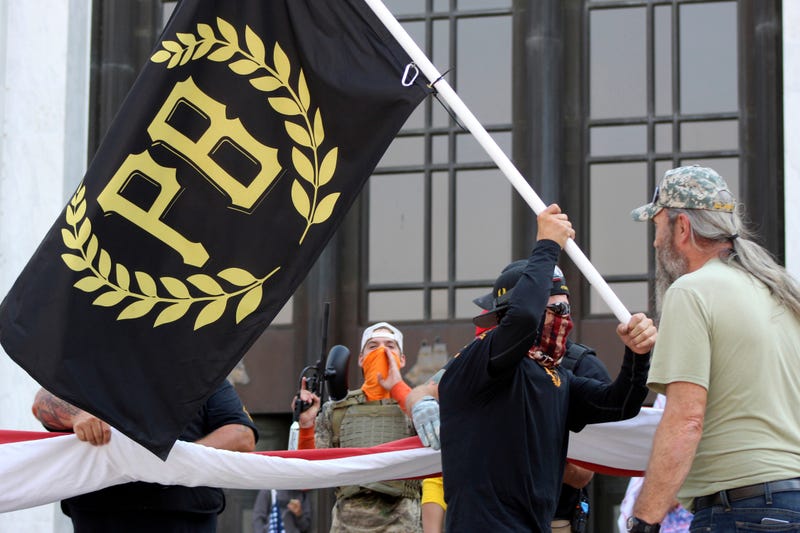 Photo credit FILE - In this Sept. 7, 2020 photo, a protester carries a Proud Boys banner, symbol of a right-wing group, while other members start to unfurl a large U.S. flag in front of the Oregon State Capitol in Salem, Ore. President Donald Trump didn't condemn white supremacist groups and their role in violence in some American cities this summer. Instead, he said the violence is a “left-wing" problem and he told one far-right extremist group to “stand back and stand by.” His comments Tuesday night were in response to debate moderator Chris Wallace asking if he would condemn white supremacists and militia groups. Trump's exchange with Democrat Joe Biden left the extremist group Proud Boys celebrating what some of its members saw as tacit approval. (AP Photo/Andrew Selsky, File)
By The Associated Press

WASHINGTON (AP) — President Donald Trump on Wednesday tried to walk back his refusal to outright condemn a far right fascist group during his debate with Democrat Joe Biden, but the inflammatory moment was far from the first time the president has failed to denounce white supremacists or has advanced racist ideas.

Trump's initial refusal to criticize the Proud Boys — instead saying the group should “stand back and stand by” — drew fierce blowback before he altered his message in a day-later effort to quell the firestorm.

“I don’t know who Proud Boys are. But whoever they are they have to stand down, let law enforcement do their work,” Trump told reporters as he left the White House for a campaign stop in Minnesota.

The new flareup over Trump's messaging on race was playing out just weeks before the election, leaving the president to play defense on yet another issue when he’s already facing criticism of his handling of the coronavirus pandemic and under new scrutiny over his taxes.

And even after saying the Proud Boys should “stand down,” Trump went on to call out forces on the other end of the political spectrum and tried to attack Biden. It was an echo of the way he had blamed “both sides” for the 2017 violence between white supremacists and anti-racist protesters in Charlottesville, Virginia.

“Now antifa is a real problem,” Trump said. “The problem is on the left. And Biden refuses to talk about it.”

In fact, FBI Director Christopher Wray told a congressional panel last week that it was white supremacists and anti-government extremists who have been responsible for most of the recent deadly attacks by extremist groups in the U.S.

Proud Boys leaders and supporters took to social media to celebrate the president’s comments at the debate, with more than 5,000 of the group’s members posting “Stand Back” and “Stand By” above and below the group’s logo.

And when Trump was directly asked Wednesday if he “would welcome white supremacist support,” he ignored the question and again stressed the need for “law and order.”

Trump built his political career on the back of the racist lie of birtherism — the false claim that Barack Obama was not born in the United States — and his business and political lives have long featured racial rhetoric and inflammatory actions. The president has rarely condemned white supremacists when not pressed to do so, and his refusal to criticize the fascist group was denounced by Democrats on Wednesday.

Senate Democratic leader Chuck Schumer pressed his Republican colleagues: “How are you not embarrassed that President Trump represents your party? How can you possibly, possibly, support anyone who behaves this way?”