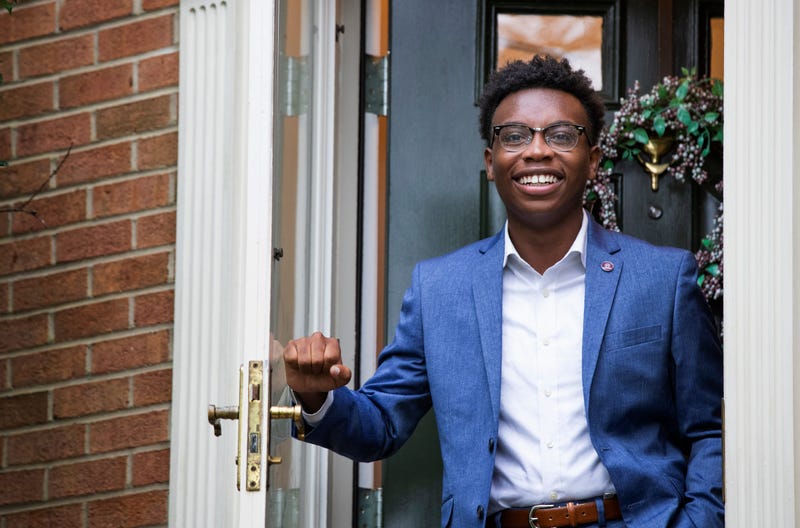 Photo credit Rick Hart, a volunteer for the Democratic presidential candidate former Vice President Joe Biden, at his family's home in Laurel, Md., Sunday, Aug. 16, 2020. Colleges are reopening with more online learning, and that's proving a challenge for political campaigns, parties and voter registration groups trying to register students. They're trying to figure out how to reach young voters when campuses are empty and students are scattered across the country. (AP Photo/Manuel Balce Ceneta)
By The Associated Press

RALEIGH, N.C. (AP) — Chase Gaines wishes he could get more young people in North Carolina to answer their front doors and take his GOP flyer.

Rick Hart longs for the days where he would wake up at 6 a.m. to prep for a day of campaigning in the streets of Atlanta to persuade his classmates to elect Democrats.

The two college students are on opposite ends of the political universe but facing the same challenge: reaching young voters when campuses are empty and students are scattered across the country.

“The pandemic really did hit us significantly," said Hart, an unpaid student volunteer at Morehouse College who was working in Georgia on behalf of Democratic presidential nominee Joe Biden, but is now back at his parents' home in Laurel, Maryland. "The country kind of came to a shut down and we were like, ‘What do we do next?’”

Groups dedicated to rallying young voters have worries that go beyond registrations. With campuses closing, college students are especially transient, causing confusion about whether they should register at their home or school address. The shift to mail voting raises other unexpected hurdles for young voters, including a lack of familiarity with the U.S. Postal Service and even improper cursive penmanship that can lead to rejected votes.

“Younger voters are behind the eight ball to begin with, and COVID is just going to make it worse,” said Daniel Smith, a professor and chair of political science at the University of Florida, who has studied mail-in balloting.

All the these worries are a bigger headache for Democrats, who are more dependent on college voters' support and, in a traditional campaign, their volunteerism. Voters under 30 made up 13 percent of the electorate in 2016, according to an analysis by Pew Research Center. This year, polls show that the age group favors Biden by a wide margin. And if they vote, they could also play an important role in Senate, House and down-ballot contests.

But traditional outreach to college voters has been upended. There are no tables set up in many student unions or young people carrying clipboards at concerts and rallies, said Patrick Schuh, Michigan state director for America Votes, which supports Democratic candidates and progressive causes.

“All of these visibility events are important. They show energy, they help with engagement,” Schuh said.

The initial impact was clear. In North Carolina, which President Donald Trump won in 2016 and Democrats are hoping to flip, registrations among young people between 18 and 29 dropped sharply when the virus forced campus closures in March. That has begun to rebound.

Kate Fellman, executive director of the nonpartisan voter registration group You Can Vote, said the organization set a goal this year to register 30,000 people, 18 to 25, in the state. She said the team had 4,391 new registrants before the pandemic hit in mid-March. But in the four months since, the group registered just dozens of people.

Making up for that lost ground has meant getting creative. Individual students are turning to the social media platforms to persuade young people to register to vote. NextGen is sifting through Twitter to find potential voters and is directly messaging them. Some groups and campaigns have gone old-school, ramping up phone banking efforts and noting an increased rate of responses from young people stuck at home.

There are signs that college-age people are strongly motivated to participate in the election.

Of the 39 states for which it had reliable data, the Center for Information & Research on Civic Learning and Engagement found a majority of the states already have a higher number of young people now registered to vote in 2020 compared with November 2016; Battleground states are all over the map.

The number of adult registrants between 18 and 24 in Georgia is 28% higher than it was in November 2016. Registration is up by 13% in Texas, 10% in Arizona and 7% in Michigan, but down in Ohio by 17% and 10% in Pennsylvania over the same period of time. Nevada, Florida and North Carolina nearly mirror the number of young registered voters before the 2016 presidential election.

Republican campaigns have been more willing to conduct outreach in person. Trump campaign spokeswoman Samantha Zager said the campaign has 73 target campuses and more than 550 students working to assist with r