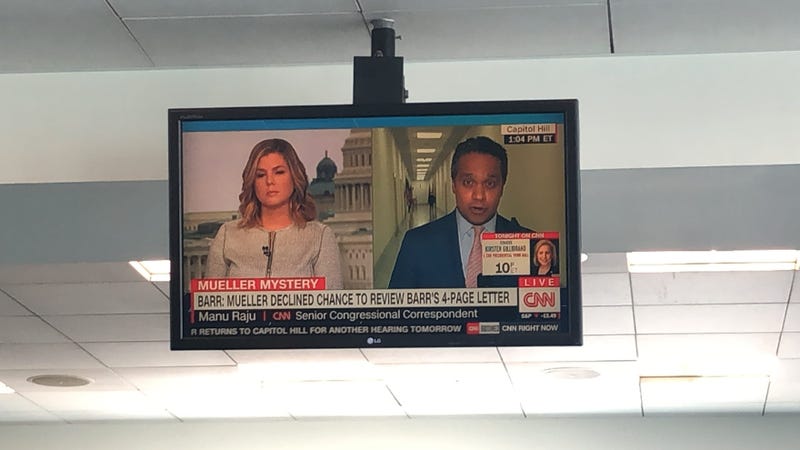 Exiting a plane and walking into a gate at the Orlando International Airport, a booming voice from above rains down upon you as though offering some sort of supreme newsworthy guidance for your arrival to the Theme Park Capital of the World.

As you walk through the crowded terminal to get your bags or to catch a ride, there are some places to escape the even-toned offerings of the voice, but at other places, there’s no escaping that voice.

Then you realize it’s not a deity, rather it’s Wolf Blitzer of CNN. And to many, that’s major cause of unease because of the disdain much of the population has recently developed for the network since Donald Trump announced his candidacy for president in 2015.

Since the release of the Robert Mueller’s report on the investigation of collusion between President Trump and Russia, CNN has seen its ratings plummet. The network dropped 24% in viewership in March of 2019, compared to March of 2018.

Moreover, during the first week of April, CNN fell to 15th in primetime viewership, trailing HGTV and USA Network, while also falling behind Nickelodeon and Investigation Discovery in total day ratings.

“Going into airports – major airports – the TVs that are on are always on CNN,” said frequent flyer Ken Coleman, who lives in Orlando and travels 80% of the work week. “I was kind of curious why it’s always on CNN and no other station (at the gates).”

But a drop in viewership is not the case with the CNN Airport Network.

CNN is the main content provider in some 60 airports throughout the country with its own CNN Airport Network. At one point, the network was in 20 of the top 25 busiest airports in the nation.

That means while sitting at the gate and waiting for a flight, CNN Airport Network is in view and many times within earshot, regardless of where you sit. It also means that while strolling to baggage claim or to get into a waiting car that CNN Airport Network follows you through the terminal.

And maybe that wouldn't be such a big deal if so many people didn't take issue with CNN. According to a Washinton Post poll done in January of this year, very few people listed CNN as their most-trusted news source. Other media outlets did even worse.

That survey says only 11% of America, (19% of Democrats, 3% of Republicans) list CNN as the news outlet they trust the most, be it television, radio or print. Fox News was second at just 9%.

Moreover, in a study by the Harvard Kennedy School’s Shorenstein Center on Media, Politics and Public Safety of major media outlets of both broadcast and print, it found CNN’s coverage of President Donald Trump was 93% negative and only 7% positive over his first 100 days in office. CNN tied with NBC with the highest percentage of negative coverage of President Trump, the study found.

Compare that to the numbers for previous presidents by all the news networks combined, where Barack Obama was 41% negative, 59% positive; George W. Bush, 57% negative, 43% positive; and Bill Clinton, 60% negative, 40% positive. 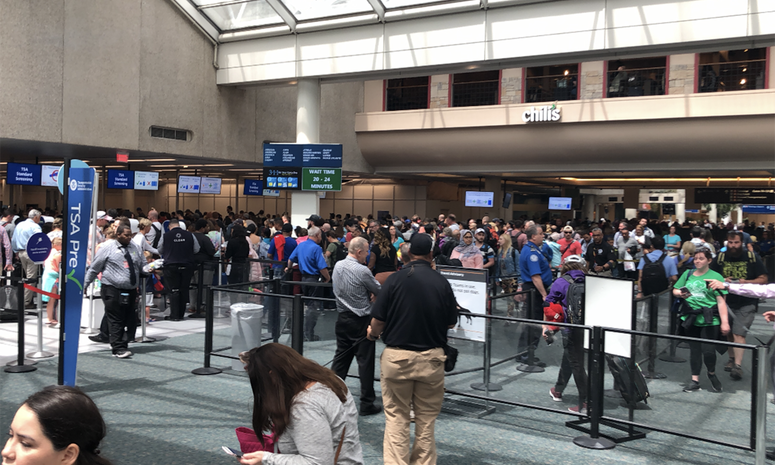 Within the last few months, reports surfaced saying American Airlines and Delta Airlines will no longer show news channels like CNN, Fox News or MSNBC in their private lounges at airports because of arguments amongst the patrons there.

“There is certainly a sense in this country where the mere presence off Fox News playing in a public space upsets people and the mere presence of CNN or NBC playing in a public place upsets other people,” Dr. Thompson said. “And an airport is the last place you want to be fomenting arguments among people. And it's a sorry state of affairs, but we are culturally now in an emotional environment that what's on the television set in a public place can cause a huge argument, and I think that's something to be looked at as well.”

The CNN Airport Network is also on a 10-second delay when streaming its live news stories, like ‘The Situation Room with Wolf Blitzer,’ so as not to air something that may not be suitable for younger viewers or anything that might involve an airplane tragedy.

CNN boasts its Airport Network is aired at more than 2,400 gates in the country and 329 million people are exposed to the broadcast at airports.

The CNN Airport Network isn’t in all of these airports by happenstance. CNN is paying a hefty price to bombard you with their content.

The media giant pays each individual airport a negotiated sum, as well as handles all the infrastructure and costs in having its content displayed. That means that CNN covers the costs for all the cables and televisions used in each airport to air their programming.

For instance, the busiest airport in the world is Hartsfield International Airport in Atlanta. That also happens to be the headquarters of CNN. 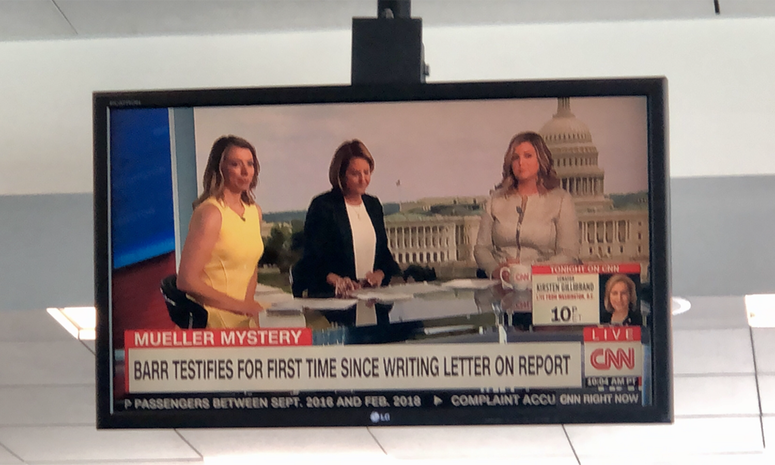 Earlier this year, CNN and Hartsfield International agreed to a new 10-year contract, where the network will pay the airport $225,000 annually to air its airport network. Miami International Airport signed an eight-year contract a few years ago with CNN that guarantees the airport a minimum of $150,000 a year in revenue.

Charlotte Douglas International Airport is one of the busiest airports in the world and it’s one of the few massive airports that doesn’t have a contract with CNN.

“Quite frankly, for us, the return of investment just wasn’t there. There’s higher quality revenue to be had from other advertising sources.

“Advertising is a revenue stream to the airport and we use that to help offset our costs and to invest in the facility, and so this was something … (where) we made an active decision to not to enter into that kind of advertising contract via the advertising concessioner with CNN, because CNN requires a certain investment. It’s not ‘free.’ There are certain investments that the airport and advertiser have to make and commitments that have to (be made) and we just didn’t see the return as sufficient enough to justify that.”

According to RDU spokesperson Crystal Feldman, RDU signed its contract with the network in 2017, and is guaranteed a minimum of $45,000 a year for five years. CNN also replaced all of the holdroom TV monitors and audio equipment, which alleviated the airport’s responsibility of maintaining and operating the TV monitors and audio equipment, which results in cost reduction for the airport.

She also said the airport had been with Clear Channel Airports, which is the only other airport network available. Clear Channel only shows entertainment-type programming.

“RDU made the decision to contract with CNN because the agreement generates revenue for the airport, provided no-cost upgrades to equipment that was at its end-of-life, and provides customers with 24/7 programming service,” Feldman said.

A request to speak to RDU’s president and CEO Michael Landguth was denied by Feldman.

A VIOLATION OF RIGHTS?

Nearly every airport, if not all, is operated by a local government, be it city, county or state. As a result, the question of whether the public in an airport has a right to say which television stations they’d like to watch comes into play.

Then there are the issues surrounding the volume of the monitors – who controls the audio levels and from where?

But whether or not a publicly operated entity has the right to force-feed those in the airport a particular source of programming, especially if a high percentage feels the newsfeed is nothing short of political propaganda, is a primary concern.

“You’d definitely like to see some variety, whether it’s a sports network or a health network or HGTV, or whatever it may be,” Coleman said. “A little variety is always good.” 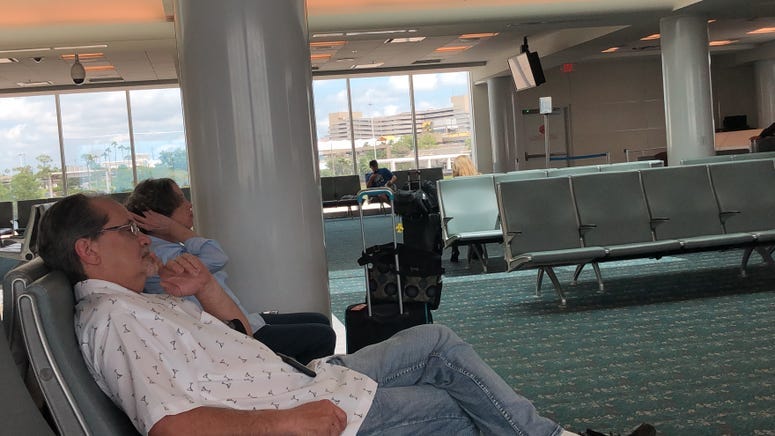 The ACLU of North Carolina said that because airports are viewed as businesses, they don’t fall under the same guidelines as, say, a public library. Government officials are allowed to approve and sign contracts with companies and signing an exclusive contract with CNN is no different than signing one with Domino’s Pizza.

Congressman Steve King of Iowa, who is serving his eighth term, says CNN has a monopoly and broached the topic in late 2018. He submitted amendments to the FAA Reauthorization Act of 2018, which would expand broadcast choices in airports by ensuring the monitor equipment in the airport isn’t owned by the broadcasting network. It would also prevent airports and news networks from signing contracts where the content equipment is controlled.

King’s proposed amendments went before the Rules Committee of Congress, which decides what amendments are allowed to go to the House floor and be debated and voted on. The Committee opted not to include King’s proposal. King said it’s rather common for amendments not to be chosen for debate.

“What we have here is a forced captive audience,” King said in an interview. “You could walk out of a library, but when you're trapped with a long layover, it really doesn't pay to try to escape CNN because you can't escape them. If you're inside security, you're going to hear CNN, and it's offensive to me that it's like Big Brother is deciding what you're going to watch. …

“We shouldn't be force fed information that's selected by any ideology, whether it comes from the right or the left.”

One passenger named Peter, who didn’t want to give his full name, said he doesn’t fly that often, but said when he does travel he hasn’t noticed CNN on airport monitors because he’s usually preoccupied. However, when told about the contracts the network has with airports, it piqued his interest in the matter.

“It is a little strange that the whole premise at CNN has managed to kind of monopolize the airport, you’d think that maybe there would be different things on different screens in the airport, especially with the polarity of today’s political environment,” said Peter, who lives in Connecticut. “I’ve never really thought about it before. If it’s an exclusive agreement, I think there should be some kind of note that’s saying … ‘CNN sponsors this,’ or something that you know that there’s an exclusive agreement.”

But what may be more alarming than the content being aired is the thought that CNN may be controlling the volume off site from its control center. When asked, numerous gate agents said they have no control over the volume.

CNN Airport Network senior vice president Debbie Cooper didn’t respond to an interview request so as to confirm where and how the volume of the TVs is controlled.

“I had some of this background work done by some researchers that were working with my staff,” he said. “(The memo from my staff) says: Control of the televisions has handled autonomously by the TVs themselves or remotely by CNN employees, including the volume.”

That means the volume could be very hard to hear when Dr. Sanjay Gupta is doing a story on adverse foods for your health, but could blast it while Blitzer or others are saying disparaging remarks about President Trump or on any topic.

“It does bother me, because I do see where there are other interesting stories that can come up that you cannot hear, but then there are certain things that are news related where it is a little bit loud,” Coleman said.

Even with Rep. King trying to rid airports of a believed monopoly of CNN, and with only 19% of Americans trusting CNN, Dr. Thompson says don’t expect change anytime soon.

“There is a massive captive audience in an airport, which is why an airport is ripe for all kinds of ways to sell advertising, because you've got people who are there and they can't leave until the plane does,” he said. “And that’s why I would be surprised if we were to see television sets disappear from the airport.”

But Peter, the passenger from Connecticut, says he has a solution to it all.

“I don’t think anybody trusts any of the news networks at this point,” he said. “So you can do what I do and don’t really watch the news.”

Except when you don’t have a choice.