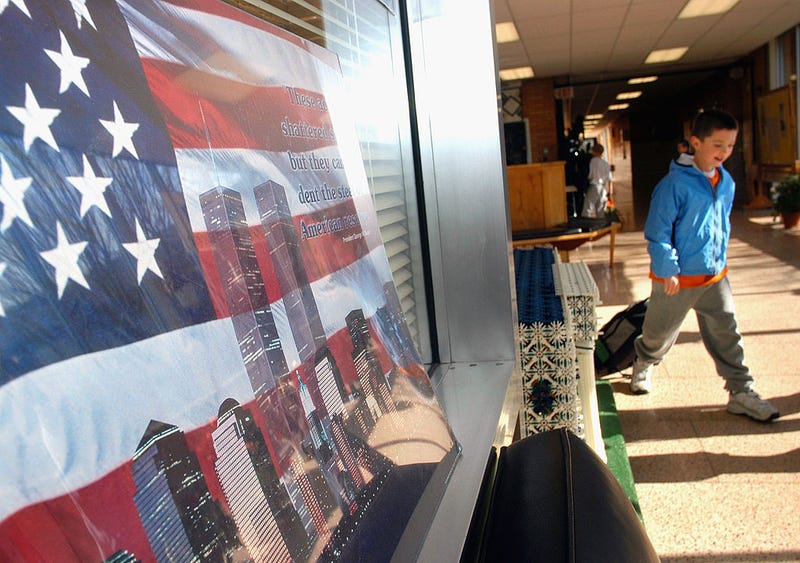 A boy walks past an American flag bearing 9/11 memorial at the start of the school day. Photo credit William Thomas Cain/Getty Images
By WCBS 880 Newsroom

Over the last 20 years, teaching about 9/11 in schools across the country has changed dramatically.

Before education officials in each state started talking about how children should be taught about 9/11, there were dozens of teachers all across the Tri-State area who were trying to figure it out on the day of the attacks.

“We just started teaching. It was 9/11 – we started four or five days earlier, so I really didn’t know them yet,” said Long Island educator Ron Gross.

Gross was teaching eighth graders in the William Floyd School District on Sept. 11, 2001 and says in the early days, months and years after the terror attacks, there was no history to teach because everyone was living through it.

He told WCBS 880 that he always remembers one student in particular from the days after the attacks.

“She was quietly crying and I just spoke to her and I said, ‘Are you okay? Everything alright?’ And she goes, ‘My dad's a fireman.’ And I went, ‘In New York City?’ And she said, ‘Yeah.’ I said, ‘He’s okay?’ ‘No, he's okay but, he has to be there, he can't leave,’” Gross said. “And it was just like boom – it just landed you right in the heart, right the middle class… your student's father is at Ground Zero right now.”

After two decades, teaching about 9/11 has evolved greatly and teachers often wonder what shouldn’t be talked about, rather than what should be, when discussing the subject.

For Gross, he says he likes to avoid the anti-Islamic movement and refuses to show students any scenes of people trapped inside the Twin Towers.

And now, he notes that he can no longer ask children to talk about their own 9/11 experiences – as the current generation of students were not alive when the attacks happened.

“All of those sharing experiences that we had disappeared all of a sudden. And it was right then and there where I said, ‘Okay, now I've got to actually create a curriculum based upon the fact that I've got students in front of me that have zero recollection whatsoever,’” Gross said.

So, what is in that new curriculum? Gross says it’s pretty expansive.

“[We discuss] domestic terrorism, we've talked about international terrorism and security and safety and all that,” he said.

Gross notes every year, the education culminates with a trip to the 9/11 Memorial & Museum in Lower Manhattan.