NEW YORK (WCBS 880) — At some point, everyone has seen or heard the heartbreaking news coverage of 9/11. Because all the reporters were so busy describing what they saw, it’s not often that they get to share what their personal experiences of the event were — until now.

This week, WCBS 880 has assembled four veteran journalists who worked and witnessed the attacks on the World Trade Center from varying angles that day.

Speaking with WCBS 880’s Wayne Cabot, former anchors Pat Carroll and Jeff Caplan join reporters Sean Adams and Tom Kaminski to share each of their own real-time experiences, as well as their reflections since.

Despite seeing and processing everything differently, nothing was more important than the facts that day.

“All of your broadcast training, every breaking news story you ever covered in your whole life - suddenly you [realized] that it was preparing you for this moment,” Carroll says.

While nothing could ever prepare them for a tragedy of that caliber, Carroll adds, “We just went with it as though we had been preparing for this throughout our careers…[we knew] we were important. We were necessary.” 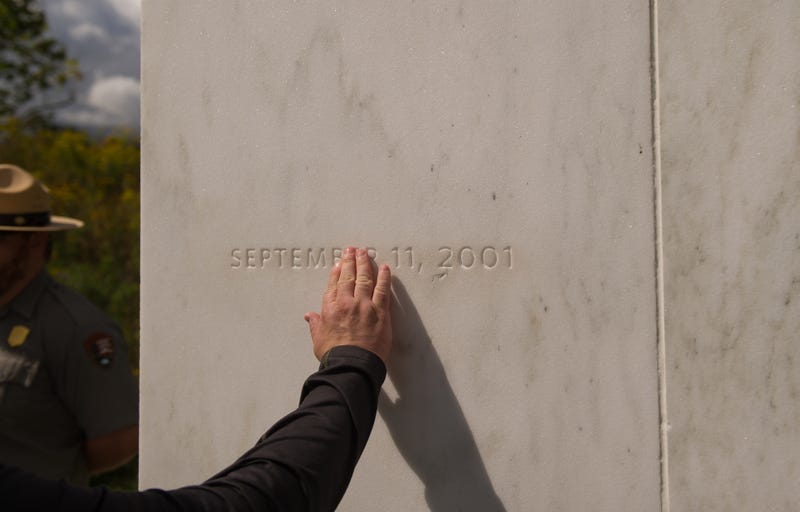 SHANKSVILLE, PA - SEPTEMBER 11: A visitor traces the date etched in a marble slab on the Wall of Names at the Flight 93 National Memorial before the 15th Anniversary of the September 11th terrorist attacks, September 11, 2016 in Shanksville, PA. United Airlines Flight 93 crashed into a field outside Shanksville, PA with 40 passengers and 4 hijackers aboard on September 11, 2001. Photo credit (Photo by Jeff Swensen/Getty Images)

“It was absolutely impossible to comprehend the enormity of the situation,” Adams added. He was one of the street reporters closest to the towers that day, and witnessed the first building collapse.

He says he couldn’t believe what was happening, “because [it was] so much larger than anything [he’d] ever experienced before.”

He also recalled telling himself, “Do not get killed,” that day because he couldn’t be of any use dead. With so much mayhem at the scene, it wasn’t until the South Tower collapsed that he was able to deliver his first live report.

As crucial as that report was to the people of New York, Adams revealed that the report meant something more to his family because it confirmed to them that he was still alive. 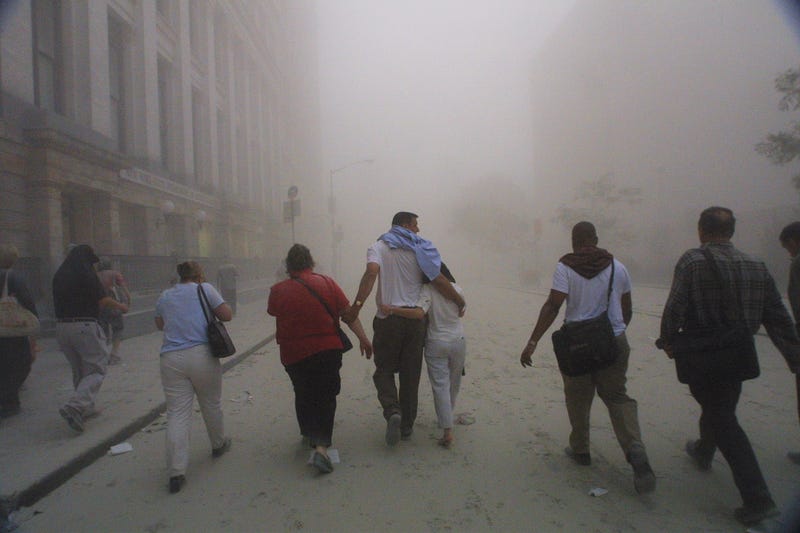 Civilians flee as a tower of the World Trade Center collapses September 11, 2001 after two airplanes slammed into the twin towers in an alleged terrorist attack. Photo credit (Photo by Mario Tama/Getty Images)

Up in the sky that morning, Kaminski was just reporting traffic as usual when he saw what he called “the flash and the fireball” on the North Tower.

Even as Carroll patched him in to report what he was seeing, it wasn’t until he his pilot received word from air traffic controllers stating, “The airspace has been sterilized,” that they began to worry. 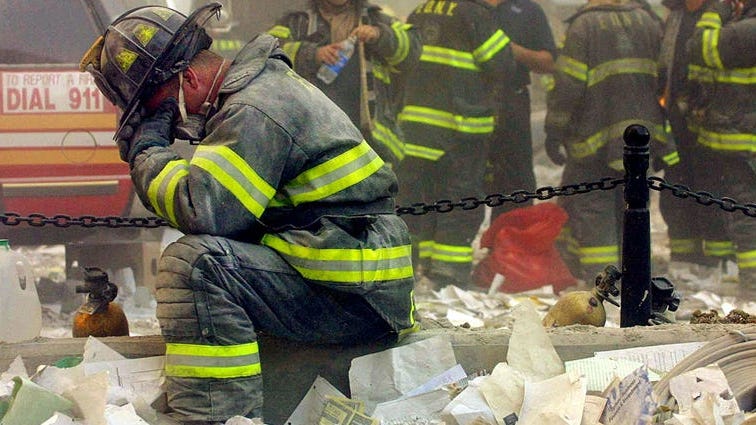 What scared them the most wasn’t the phrase itself, but rather the fact that as experienced as they were they had never heard it before. That’s when the seriousness of the situation started to settle in.

Kaminski continued to do his job until his helicopter was finally grounded. In fact, he points to one moment in the broadcast, right after the South Tower was struck, where you can hear him start talking about the traffic.

“I just needed to center myself,” he says, after realizing his hands started to shake. 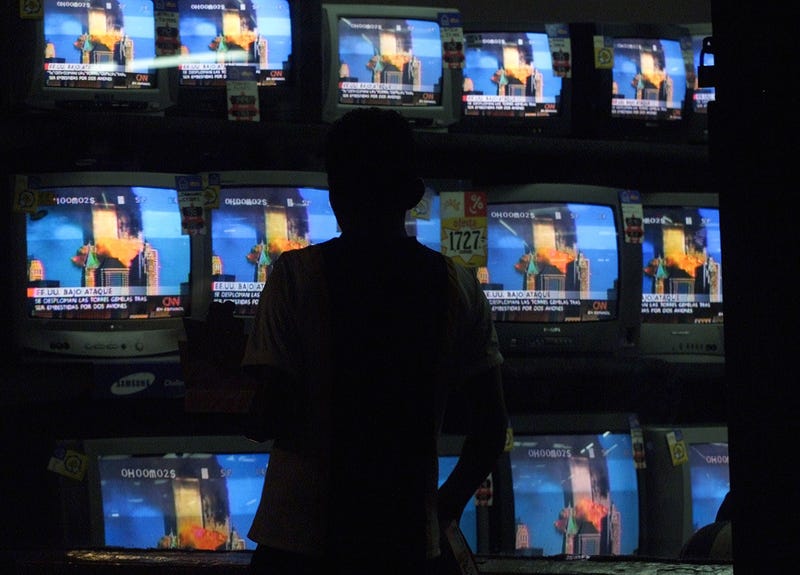 “And doing traffic, which I had done for all these years, was exactly how I did that,” he continued, “I start talking about traffic on West Street, and on Canal Street, and I talked about vehicles coming down into [that] area from every conceivable direction. That was for me.”

When he didn’t know what else to do, Kaminski just did his job. Looking back on that day, former 880 anchor Jeff Caplan agrees that every reporter that day was “on autopilot.”

He recalls watching a random 9/11 special on TV one year where the entire day was synched up to pictures, video, and audio. It wasn’t until he saw people “gathering around somebody’s radio, holding hands [listening to] our voices...listening with tears coming down their faces," he wasn't aware of how much 880’s coverage - or any coverage - meant to the average listener that day.

He says that seeing, “the way that people perceived what [they] were doing,” made him lose it. 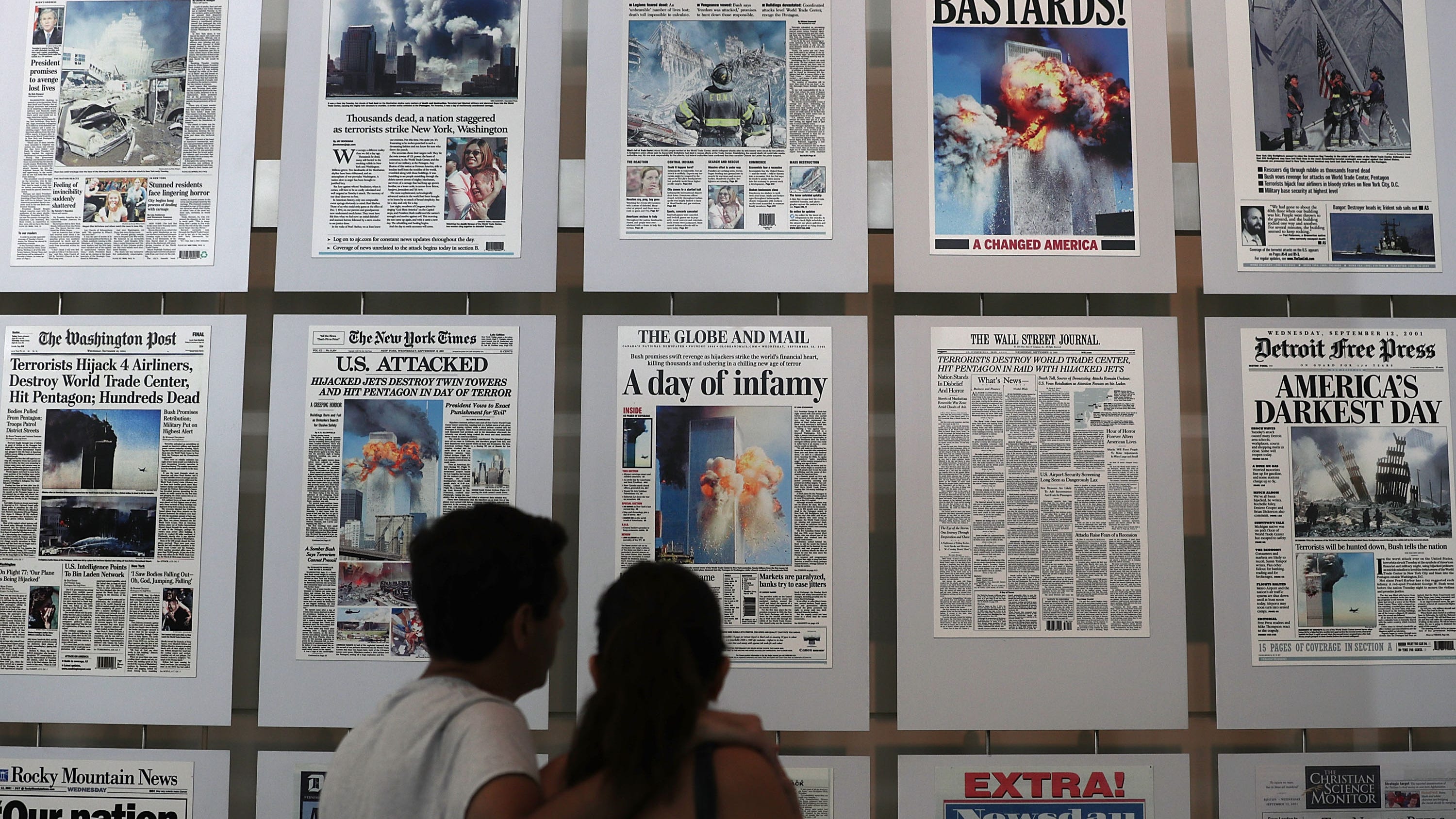 LISTEN: Directors of new 9/11 doc explore the events from the eyes of reporters