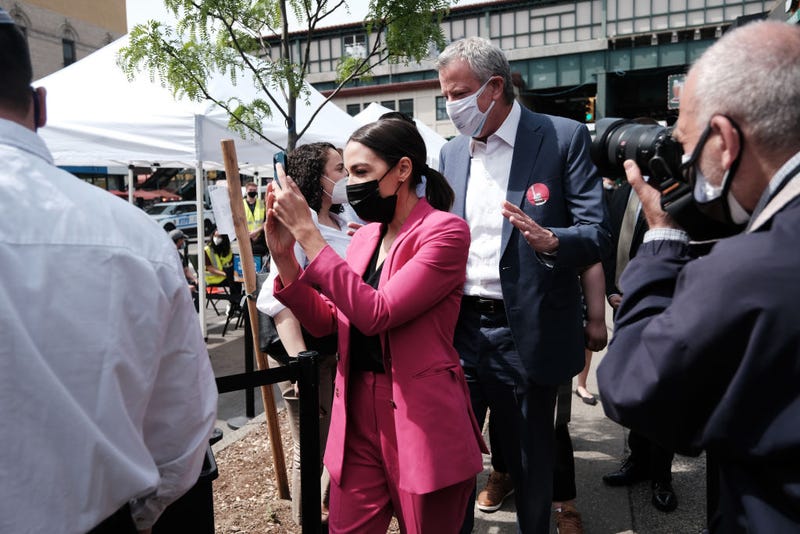 This is how NYC rolls. A mobile vaccine bus is on Castle Hill Ave in the Bronx as the city tries to improve access and equity. @NYCMayor and @AOC visited and talked about its importance. This could be a model for elsewhere in the state and country. @wcbs880 pic.twitter.com/hmmnrV8HU5

On Friday, Mayor de Blasio and Rep. Ocasio-Cortez visited a bus on Castle Hill Avenue in the Bronx, saying that the buses are still playing a vital part in conducting community outreach and bringing vaccines to those who cannot go to get one themselves.

“You don’t need an appointment – you can make one if you want. It is ADA compliant, so if you have any sort of mobility issues, we can get you on that bus, and even if you’re afraid of heights, we can vaccinate you right here on the sidewalk,” she said. “So, we’re really excited. This is what it's going to take in order for us to get equity in vaccine distribution in the city and across the country, frankly.”

VIDEO. @AOC makes her pitch for NYC’s vaccine bus. The bus is parked on Castle Hill Ave in the Bronx and you don’t need an appointment. AOC and @NYCMayor say this will help reach into communities where vaccine access has been a problem. @wcbs880 pic.twitter.com/XDQdxDZKw3

De Blasio agreed, saying many New Yorkers are more likely to get vaccinated if the shots are brought directly to them.

“I think there's a lot of people who are ready to get vaccinated, but it has to be easy. It has to be in the neighborhood,” the mayor said. “Sometimes they have questions. We've talked to the folks who work here, they said, sometimes people need a few answers and then they're willing. I think we've got a lot of people who are ready but need a little extra push or a little help.”

VIDEO. NYC has rolled out a vaccine clinic on a bus on Castle Hill Ave in the Bronx. @NYCMayor says it’s important to make the shots more accessible and he sees this as a model for elsewhere in the state and country. @wcbs880 pic.twitter.com/3foaHKUBb5

The fleet of 20 buses can administer between 150 to 200 doses per day and are complete with six exam rooms and a refrigeration area to store vaccine doses.

Residents who received their vaccine in the bus say it was nicer than they expected.

“The bus is very clean. Everyone is sectioned out by like these little curtains. It’s nice actually,” said one woman who made an appointment at the bus for the morning.

Another resident says she was grateful the bus was in her neighborhood, as she had been struggling to get an appointment at locations closer to her home.

“I couldn't get an appointment anyway, it was very hard, that’s why I was so happy that they were here,” she told WCBS 880.

The buses have in-person staff who speak English, Spanish, Mandarin and Cantonese available, according to the head of the Test and Trace Corps Dr. Ted Long.

They also offer the Johnson & Johnson vaccine, meaning recipients will not need to schedule a second shot.