BLUE POINT, N.Y. (WCBS 880) — Hundreds of teal-colored ribbons have been placed throughout Gabby Petito's Long Island hometown to honor the 22-year-old as a Wyoming coroner positively identified her remains and determined she was the victim of a homicide.

Sadness fell over Blue Point, where Petito grew up and where her mother, stepfather and siblings still reside, after the FBI released the coroner's findings Tuesday.

The ribbons are the color of Petito's eyes and now hang all around the community in a show of support for the family.

In Gabby Petito’s hometown of Blue Point, #LongIsland today, where teal ribbons line the streets around her family’s home. A show of support from people who feel helpless after learning of her death. #gabbypetito @ABC7NY pic.twitter.com/7VAQIpBjRH

A billboard paying tribute to Petito also went up in Chamber Park on Montauk Highway at the Bayport-Blue Point border. It features a photo of Petito standing in front of an angel wings mural with the words "Gabby Petito - Forever in our hearts..." written in cursive. 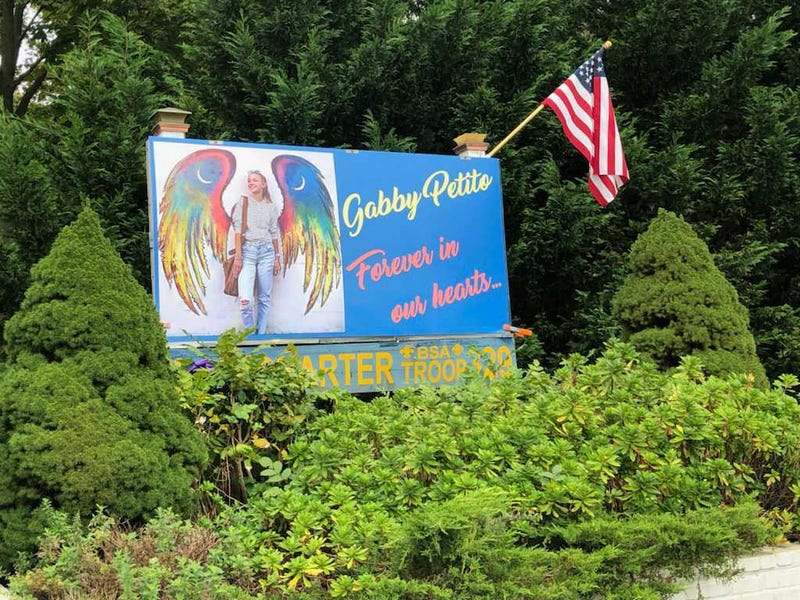 "She was all positivity. The brightness of the ribbon really is so significant because that was her personality," family friend Jennifer McNamara told WCBS 880's Sophia Hall. "It was bright, it was happy, it was positive. She was all sort of butterflies and rainbows."

Her charity, the Johnny Mac Foundation, which was founded to honor her late firefighter husband, helped put up the ribbons and is raising money for the family.

"We know that this community is hurting. So many of us in this community loved her and love the family," McNamara said. "Even if you didn't know the family I think that there is just a tremendous feeling of loss for all of us in the community that something this horrifying would happen. I think everybody wants to show support and we thought this would be a nice way to do it."

McNamara said she hopes that people think of Gabby and say a prayer for her and for her family when they see the ribbons.