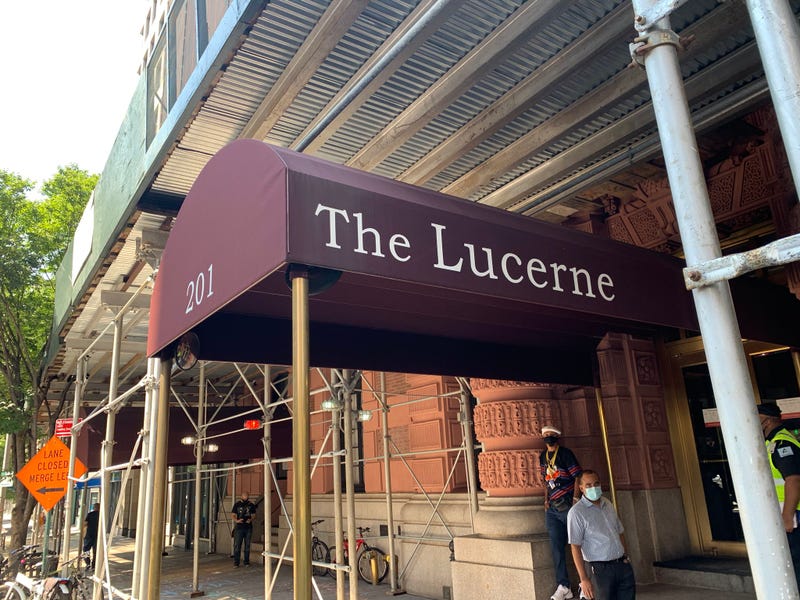 The Lucerne on the Upper West Side. Photo credit Mack Rosenberg
By Marla Diamond

NEW YORK (WCBS 880) — A judge has granted a temporary restraining order, preventing the city from relocating more than 200 homeless men staying at a Upper West Side hotel.

The 235 men being housed at the Lucerne Hotel can stay put after the judge blocked their transfer to a new shelter on William Street in the Financial District.

They can remain at the Lucerne until a hearing on the matter scheduled for Nov. 16.

Judge issues a temporary restraining order preventing the city from relocating over 200 men staying at a temporary shelter on the Upper West Side. #uws #Homeless @wcbs880 pic.twitter.com/a0B7ivNcn0

"We are grateful to Judge Debra James for slapping back the City's poorly conceived plan to not only displace Lucerne residents during a pandemic, but deprive them of critical support services," Corinne Low, co-founder of UWS Open Hearts, and Lucerne resident Da Homeless Hero said in a joint statement. "Although a well connected, wealthy group has spent three months and hundreds of thousands of dollars harassing people in need, no neighborhood is exempt from the shared responsibility we all have to make room for struggling New Yorkers. It's time for the Mayor to stand up for sane public policy and stop cowering to well funded, private interests."

Monday was to be the day that the men were to gather their belongings and be bussed down to a former Radisson Hotel in the Wall Street area, but the city's plan was initially put on hold after three men at the shelter asked the courts to intervene.

Their attorney, Michael Hiller, told WCBS-TV the trauma associated with relocation now would put the men at "far greater risk for harm."

"They want to stay because they're doing really just tremendous work. The Upper West Side has embraced these men, has supported these men and they feel it and they also know that they are not really welcome downtown," Hiller said. "The moment that they began to take of as a group, they were doing amazingly well, that was the moment when the city pulled the rug out from under them and literally tried to take them from where they were doing so well."

At rally before the judge's ruling, Da Homeless Hero called on the mayor to "do the right thing."

"Don't destabilize us, don't move us around like that, you know, we're not cattle, we're not slaves," he said.

He's in treatment for alcohol addiction and said a transfer would be triggering.

'"That's traumatizing," he said. "Why would the mayor move us from a place where we've gained some stability and we've lessened all of the issues that have been raised by the other group?"

Larry Thomas, another plaintiff, said he's tired of being moved from shelter to shelter.

Mayor Bill de Blasio announced the move after Upper West Side residents threatened to sue over safety and quality-of-life issues. Resident complained of open drug use, men lying in the street and disturbances in open spaces.

Upper West Side resident Erica Gerson, a member of the group that threatened the lawsuit if the men weren't moved, said the transfer was mishandled from the start.

"DHS is a wreck and doesn't make any sense in how they place people. That being said I feel really confident in the decision that they are going to get better services and a better situation downtown where there's room for them to socialize. Where they can get more support services and be closer to medical care," Gerson said. "My heart goes out to them, but I think that this current move has been better thought out than some of the more previous ones."

Hiller said the men are not welcome in the Financial District either where local residents sued unsuccessfully.

A spokesman for the city's law department said the move is "the right thing to do."

"Having what will be ultimately a long-term shelter in the Wall Street area, an area that hasn't had one is a good thing," de Blasio said Monday. "Providing shelter with full services that's not available in hotels, that's a really good thing. Making sure homeless folks are closer to their medical providers, which will be possible now with this location. These are all things that are quintessential to our approach."