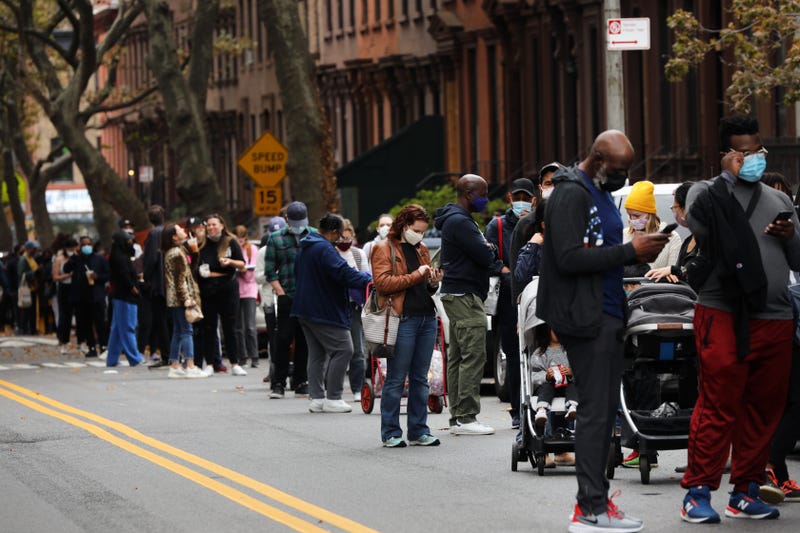 People wait in line outside of a Masonic temple in Brooklyn as early voting begins on October 24, 2020 in New York City. Photo credit Spencer Platt/Getty Images
By Steve Burns

NEW YORK (WCBS 880) -- Fingers are being pointed in all directions after early voting lines snaked around buildings and stretched across city blocks this weekend.

Some saw the long lines outside voting sites in New York City on Saturday as a sign of voter enthusiasm, but Council Member Ben Kallos also sees it as bureaucratic incompetence.

“The Upper East Side and East Harlem had one site to share, and that’s just not enough,” Kallos said.

Asked about the issue on Sunday, Gov. Andrew Cuomo said it falls to the city Council to change how the city Board of Elections works.

“If they want to make a change, they should just pass it. And whatever they pass, I will support in the Legislature,” the governor said.

But Kallos said state law mandates a certain number of early voting sites in any county and that the number is not at all tied to population density in that county, which led to the multi-hour waits this weekend.

Kallos said Manhattan’s 16 early voting sites work out to about 100,000 people per site. “No wonder there were such long lines,” he said.

Kallos said his attempts at reform have been blocked in Albany time and time again.

“It has been the corrupt Albany Legislature that has gotten in the way of people’s right to vote in order to protect their own incumbents,” Kallos said.