NEW YORK (WCBS 880) — With hockey season wrapping up soon, the New York Islanders have a lot to be excited about.

The team beat the Boston Bruins 6-2 in Game 6 on Wednesday night to advance to the Stanley Cup semifinals for the second straight year. This is also the last season that the Islanders will play at the Nassau Coliseum, before they officially move to their newly built home, the UBS Arena in Elmont, in the fall.

In this week’s In Depth Podcast, we wanted to get a firsthand look at the new stadium, which is attached to the Belmont Park Racetrack in Nassau County.

Our Peter Haskell took a trip out to the construction zone, with traffic reporter Tom Kaminski and producer Ray Martel, to speak with Tim Leiweke, who heads Oakview Group, the company building the new facility.

In their conversation, Leiweke said they are working hard every day to finish the project and are looking to honor the Belmont Park Racetrack in its design. 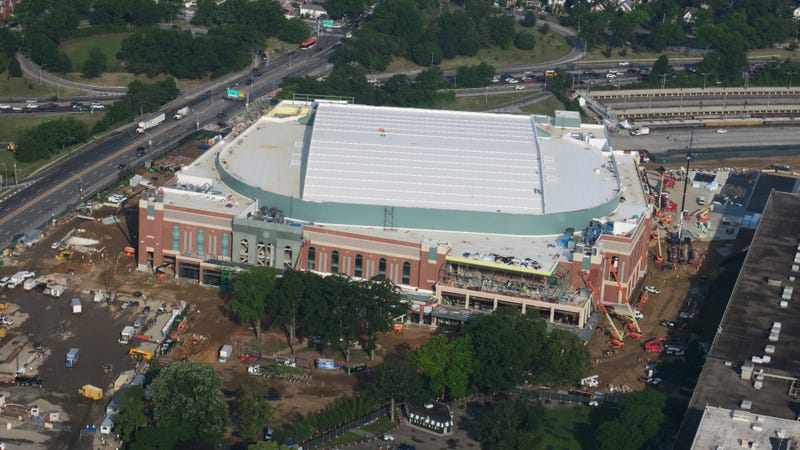 A view of the UBS Arena in Elmont from the WCBS 880 Chopper. Photo credit Tom Kaminski

“We're putting all of our time and energy on trying to finish the building off. It's a unique design of the building. So, what you'll see, and it's challenging to get it all done, is the arches and the glass and the design of the old Belmont Racetrack, we have incorporated into everything in this building,” said Leiweke. “Every piece of this building is custom design. Everything is built and designed to blend into the Belmont Park Racetrack.” 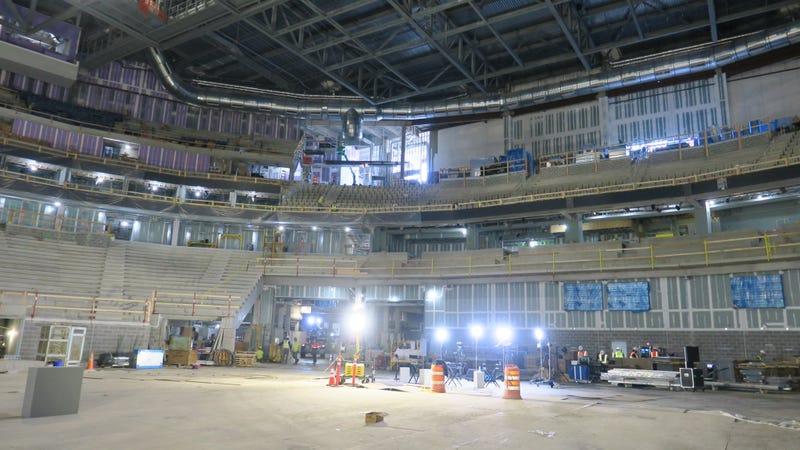 An interior view of the new UBS Arena, which is currently under construction, in Elmont. Photo credit Tom Kaminski

Construction began on the $1.3 billion arena in September 2019 and is expected to completely wrap up in late November, according to Leiweke – despite some pauses in construction. 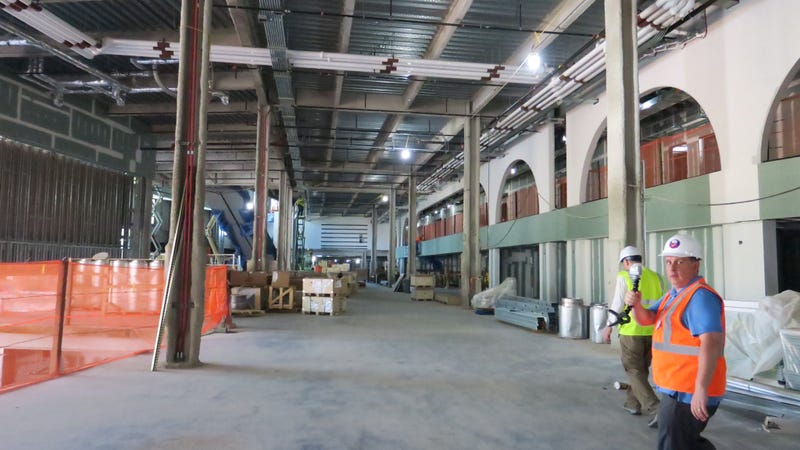 An interior view of the UBS Arena, which is currently under construction, in Elmont. Photo credit Tom Kaminski

“Amazingly, despite the COVID virus, despite the shutdown, despite the supply chain issues, we are right where we want to be and we're going to be ready to go somewhere around Thanksgiving,” he told WCBS 880’s Haskell. 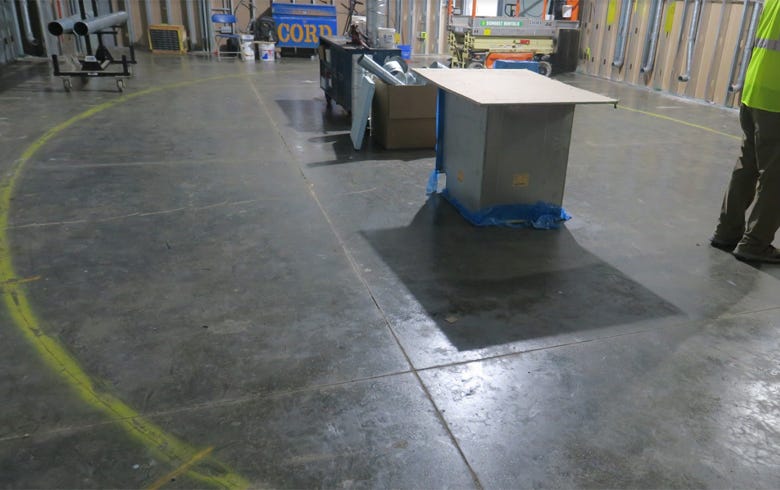 With construction buzzing around him, he told us that he believes the new state-of-the-art arena will provide the same atmosphere that the Coliseum once provided.

It's Ray on the Rink! With special guest @TomKaminskiWCBS who has a lot to say....... pic.twitter.com/pfTZGj5Aj7

“This roof is only roughly three or four feet higher than the roof at Nassau Coliseum. So, from a hockey standpoint, and the Islander fans, the actual noise and the culture that we have at those wonderful games at 'The Barn' will be recreated here because we drop the roof down to make it as intimate as possible. This is the largest lower level of any arena in the metro area so, it means that our upper bowl is actually very small,” Leiweke said.

And the view as you enter the "lower bowl" from the @UBSArena main concourse pic.twitter.com/4rutxpeGHf

According to the construction boss, the arena will have 17,500 seats for hockey, as compared to 13,400 at the Coliseum, but will still provide an intimate experience. 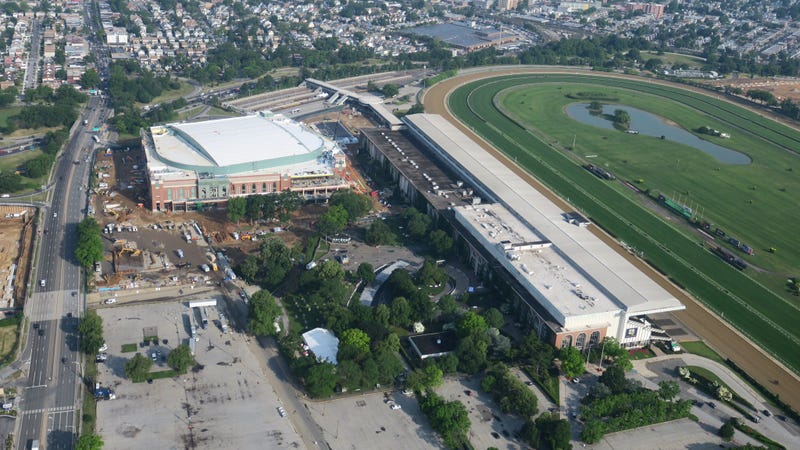 A view from the WCBS 880 Chopper of the UBS Arena next to the Belmont Park Racetrack in Elmont. Photo credit Tom Kaminski

“The bowl is as intimate as the experience at the Coliseum. So, for sporting events and Islanders, it'll be loud, it'll be the same kind of noise that you hear at Nassau Coliseum. But, for concerts, you'll see that all of the walls and all of the exposed areas will eventually be treated so that we can acoustically make sure [there’s] no bounce back, no bad sound,” Leiweke said. “So acoustically we want this experience to be as close to the Garden for a concert experience as we could get.” 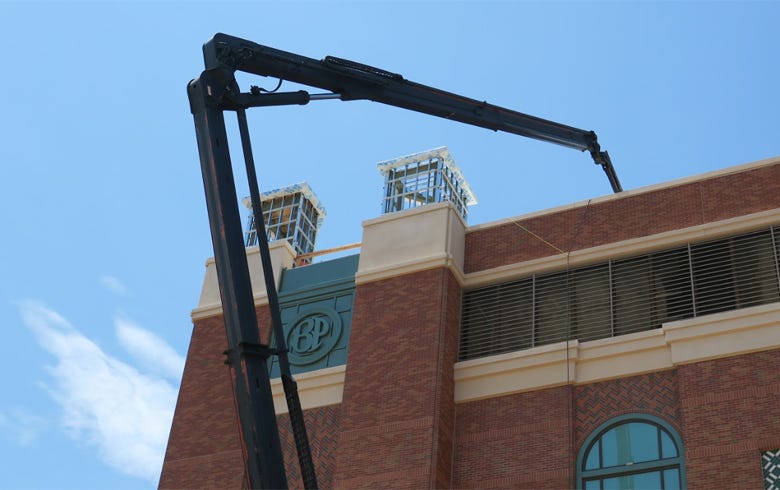 In addition to the new entertainment and sports arena that the Islanders will call home, the project will include a new hotel, upscale restaurants and shops and a brand new Long Island Rail Road station.