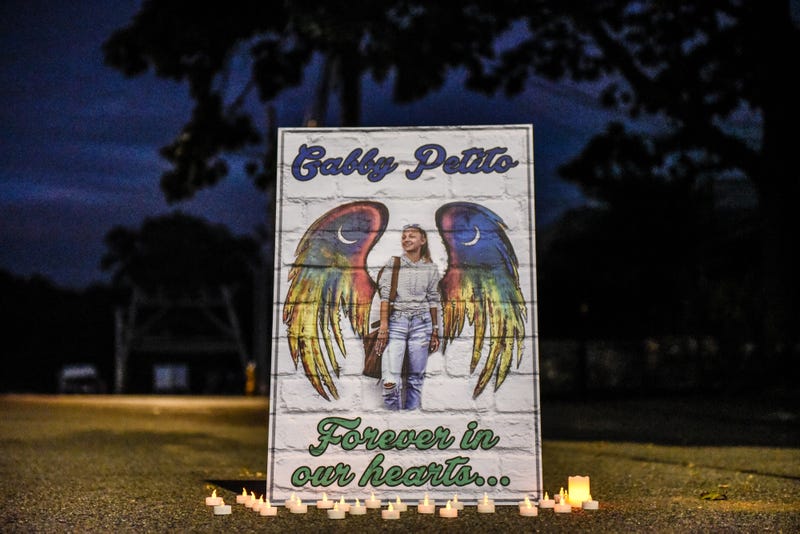 NEW YORK (WCBS 880) – The Gabby Petito Foundation raised over $13,000 during its first major fundraiser on Long Island over the weekend. Meanwhile, Petito’s mother said she believes Brian Laundrie’s parents know “most of the information” about her daughter’s disappearance and death.

Brian Laundrie’s father was issued a summons Monday for destroying a sign a protester placed on the front lawn of his family’s Florida home, court records show.

Christopher Laundrie allegedly ripped the $40 sign out from his lawn on Saturday, where reporters and protesters have gathered for weeks while his fugitive son remains missing.

The protester's sign carried the message “What if it was Cassie?” — a reference to Christopher Laundrie’s daughter, Cassie Laundrie, according to the court filing.

“On or about the morning of October 16th, 2021, the defendant, Christopher Laundrie, came out of his home, walked up to the sign, stole it and walked back onto his property,” the court complaint read.

Laundrie is scheduled to appear in a Sarasota County small claims court Dec. 1, 2021.

An Appalachian Trail hiker was ambushed at gunpoint by U.S. Marshals due to his resemblance to Brian Laundrie, according to a report in the New Yorker.

Severin Beckwith and his girlfriend, Anna Brettmann, had reportedly been hiking the trail from Georgia to Virginia when he was suddenly handcuffed at gunpoint one morning by officials looking for the fugitive Laundrie.

The Ithaca, New York, couple had been hiking since late September and had just woken up from a midday nap at the Lodge at Fontana Village Resort in Fontana Dam, North Carolina, when the marshals barged through the doors of their residence.

Beckwith, like Laundrie, is bald and sports a beard, with the magazine suggesting that the common look could be duping tipsters.

Reports of Laundrie sightings have come from across the country every since the sole person of interest in Gabby Petito’s death was reported missing on Sept. 17. One man contacted local authorities near the trail in Tennessee — and made multiple media appearances — saying he was “99.9% sure” he spoke with Laundrie in the area.

Another doppelganger has amassed more than 100,000 followers on TikTok with his @notbrianlaundrie handle.

Authorities went as far as taking Beckwith’s fingerprints, but he was eventually released because he didn’t have Laundrie’s hand tattoos or identification. The marshalls reportedly advised Beckwith to shave his beard and told the couple they’d at least have a good story to tell.

Beckwith joked to the magazine that he immediately regretted shaving “because I have much less of a chin than Laundrie does.”

The lodge they were staying at offered them a free night’s stay and complimentary breakfast over the ordeal, Beckwith said.

“It was a buffet,” Beckwith said. “We took as much as we could.”

A woman is suing the family of Brian Laundrie after a protest sign put up outside the family’s Florida home was removed over the weekend, allegedly by the 23-year-old fugitive's father, Chris Laundrie.

Andra Griffin filed the suit in Small Claims Court in Sarasota County, where the Laundries have a home in North Port. Chris Laundrie is listed as the defendant.

Griffin is seeking $40 after the sign was taken down on Saturday morning.

The suit says Griffin “contributed funds and help [sic] construct a sign with the words ‘What if it was Cassie’ in reference to Cassie Laundrie, the daughter of the Defendant, as part of a peaceful protest.”

The sign was “erected near the home” of the Laundries before Chris Laundrie “came out of his home, walked up to the sign, stole it and walked back onto his property,” the suit alleges.

Photos from Saturday allegedly show Laundrie grabbing the yellow sign and walking away with it.

The sign appeared to have been part of a small memorial to Gabby Petito that’s grown near the Laundrie’s house in recent weeks. 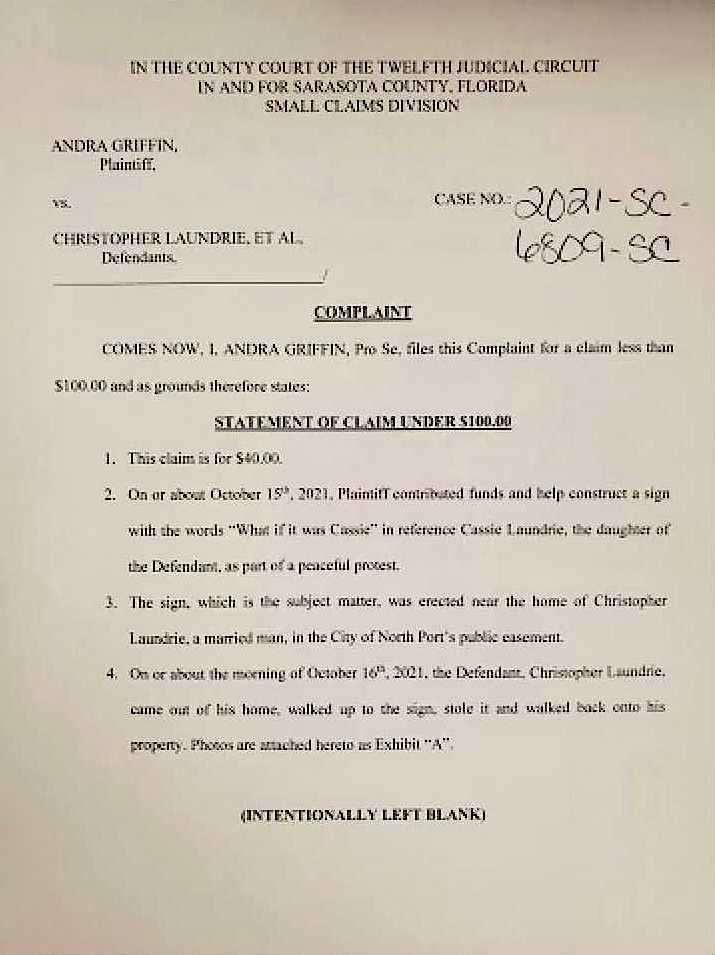 The foundation set up by Gabby Petito’s parents in her name raised more than $13,000 at its first major fundraiser on Long Island on Sunday.

The Gabby Petito Foundation held a fundraiser at the 89 North Music Venue in Patchogue in the afternoon. The event included live music, food and a 50/50 raffle.

About 200 people attended the first hour of the six-hour fundraiser, according to Fox News.

Petito’s stepdad, Jim Schmidt, is the former chief of the department, and Meehan described Petito as “one of our family members.”

The Petito/Schmidt family attorney, Richard Stafford, said the fundraiser made $13,700 for the foundation, which helps the families of missing people, as well as domestic violence victims.

According to the foundation’s website, its mission is “to address the needs of organizations who support locating missing persons and to provide aid to organizations who assist victims of domestic violence situations, through education, awareness, and prevention strategies.”

A protester hammered signs outside the home of Brian Laundrie’s parents, Chris and Roberta, on Sunday night, video from Fox News shows.

“Hey, dirty Laundries, how are you?” the protester, identified as Frankie Santana, said as he plunged a sign into a grassy area near the street. “I hope you’re not getting any sleep, because I’m not getting any damn sleep over your tragic incident.”

The signs read, “No justice, no peace” and “What if it was Cassie?” The second sign references the Laundries’ adult daughter, Cassie.

10 a.m., Oct. 18: GABBY PETITO’S MOM BELIEVES LAUNDRIES KNOW ‘MOST OF THE INFORMATION’ ABOUT HER DISAPPEARANCE

In a new interview with “60 Minutes Australia,” Gabby Petito’s parents said they believe Brian Laundrie’s parents, Chris and Roberta, may know more about her disappearance and death than they’ve said publicly.

“I think silence speaks volumes,” Petito’s mom, Nichole Schmidt, said of the Laundries. “I believe they know probably, if not everything, they know most of the information. I would love to just face-to-face ask, ‘Why are you doing this? Just tell me the truth.’”

Petito’s dad, Joseph Petito, said he couldn’t make sense of the Laundries’ actions, including not communicating with him after he reached out to them about his daughter's disappearance.

“It’s tortuous,” Petito said. “If they do know something and they’re withholding that, and they don’t want to let us know, yeah, that’s cruel. If you don’t know and you’re still not saying something—still cruel. And that is my opinion.”

Steven Bertolino, the attorney for the Laundries, has previously addressed speculation about their actions, telling news outlets in late September: “Chris and Roberta Laundrie do not know where Brian is. They are concerned about Brian and hope the FBI can locate him. The speculation by the public and some in the press that the parents assisted Brian in leaving the family home or in avoiding arrest on a warrant that was issued after Brian had already been missing for several days is just wrong.” 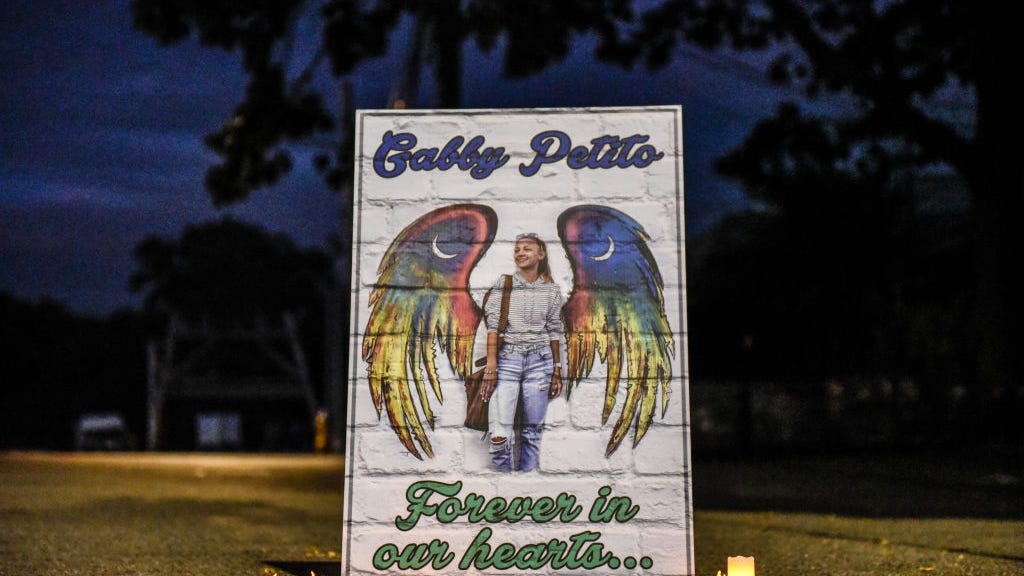