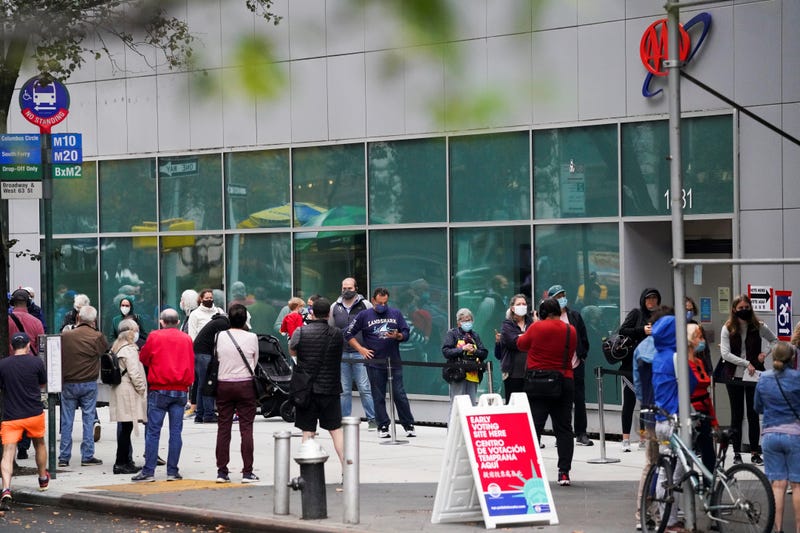 Voters wait to vote during the in-person early voting outside a polling station in Lincoln Center in New York, the United States, Oct. 24, 2020. Photo credit Xinhua/Wang Ying via Getty Images
By Marla Diamond

NEW YORK (WCBS 880) — More than 193,000 people have already voted in New York City, waiting in lines for hours this weekend to cast their ballot in person in the presidential election.

There were more lines Monday morning as early voting entered a third day in the city.

At Lincoln Center, where it took some more than four hours to vote over the weekend, the wet weather did not dampen the turnout.

One woman arrived an hour before the polls opened after facing "incomprehensible" lines when she showed up twice to cast her vote over the weekend.

One Upper West Side resident said he wanted to show up in person to make his voice heard.

"There's very little you can do about what's going on around you so this is the one thing we can all do and we're doing it," he said.

This video only tells a fraction of the story at Lincoln Center. Hundreds lined up two hours before polls opened. #EarlyVoting #NYC ⁦@wcbs880⁩ pic.twitter.com/QzEL706r3R

While lines were long, John Conklin with the Board of Elections said there were few, if any, technical difficulties across the state.

"There haven't been a lot of technical issues, you know, break downs of machines or anything like that to stop the lines from moving, so people have been coming dropping off absentee ballots in the ballot boxes as well but for the most part I think it's more that there's some enthusiasm driving turnout so people are coming out and I think that's largely been what has brought about the lines," Conklin said.

But there was some finger pointing going around as early voting lines snaked around buildings and stretched across city blocks this weekend.

Kallos said state law mandates a certain number of early voting sites in any county and that the number is not at all tied to population density in that county, which led to the multi-hour waits this weekend.

Mayor Bill de Blasio is calling on the Board of Elections to increase the number of voting machines and ensure staff is available at early voting sites to help people vote quickly and efficiently.

"The Board of Elections was clearly not prepared for this kind of turnout and needs to make adjustments immediately to be able to support all the New Yorkers who want to take part in the democratic process," de Blasio said Monday. "We need this to be a better experience. Long lines tell people to go home, that's just the reality. Long lines at a poll site discourage voting, they don't encourage it."

He said there are voting machines reserved for Election Day which should be brought out now to support early voting and the hours for weekend voting, which are 10 a.m. to 4 p.m., should be expanded.

Gov. Andrew Cuomo was blunt in his criticism of the New York City Board of Elections, saying they "blew it."

"But every election — primary, general — the New York City Board of Elections has a different excuse for their management failures," Mujica said. "The state did provide additional funding, they failed again, as they do on a regular basis."

Rep. Alexandria Ocasio-Cortez, who waited in line for 90 minutes to cast her ballot in the Bronx on Sunday morning, called hourslong wait times at many polling locations unacceptable and a form of voter suppression.

Meanwhile in New Jersey, Gov. Phil Murphy tweeted that more than 2.5 million people have already cast their votes, surpassing the 63% voter turnout in 2016.