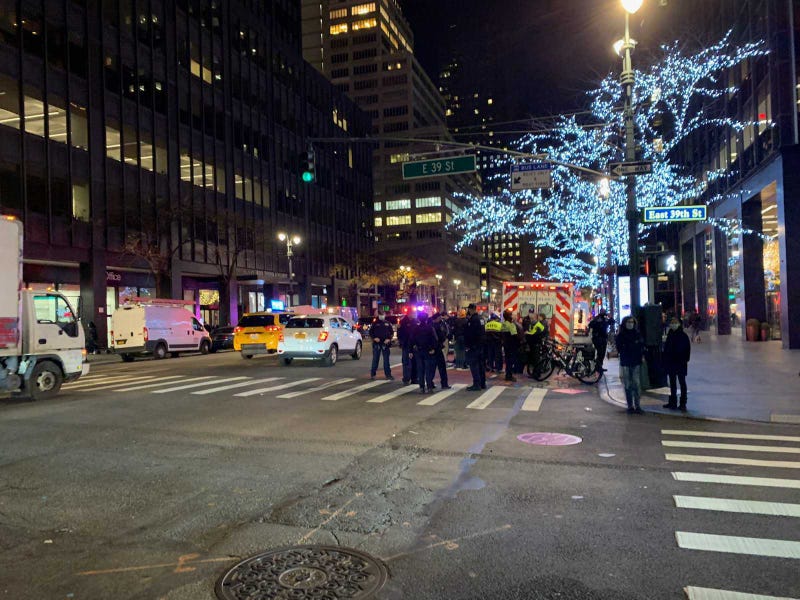 NEW YORK (WCBS 880) — At least six people suffered injuries after a car plowed into a group of protesters on the East Side of Manhattan on Friday afternoon.

It happened at 3rd Avenue and East 39th Street in Murray Hill around 4 p.m. Friday.

The circumstances of what caused the car to go into the crowd were unclear, but graphic video posted to Twitter appeared to show several people surrounding the vehicle before sped through the crowd, hitting several people.

#NYC
published today
Protestors blocking a car are hit as the driver panics and hits the gas. pic.twitter.com/NOPR4bN8uY

Surveillance video obtained by a WABC-TV assignment editor showed a different angle of the incident, which showed several people chasing after the vehicle.

Just in: surveillance video shows a vehicle speeding through a group of protestors in Murray Hill, leaving 7 of them injured. Driver and passenger being questioned, although sources say this incident does not appear to be intentional. @ABC7NY @jimdolan7 @AaronKatersky pic.twitter.com/ulRlef1lPr

The area was closed to traffic due to as police conducted their investigation.

"Please avoid the area of 3rd Avenue & 39 Avenue in Manhattan due to a vehicle collision involving multiple pedestrians. Information at this time is preliminary, updates to follow," the NYPD tweeted.

Please avoid the area of 3rd Avenue & 39 Avenue in Manhattan due to a vehicle collision involving multiple pedestrians. Information at this time is preliminary, updates to follow. pic.twitter.com/GZLKgMyZUK

3rd Ave is CLOSED at 39th St in #Manhattan with police activity in response to an accident. @wcbs880 #Midtown

Approximately 40 to 50 protesters were participating in a demonstration to support U.S. Immigration and Customs Enforcement detainees on a hunger strike at a Bergen County jail in New Jersey.

The demonstration began in Times Square and eventually made its way south to 3rd Avenue and 39th Street.

This is Christian Resseguie, one of the protestors in midtown when a black sedan sped through this afternoon. Several were injured, non life threatening. Driver is in custody. @wcbs880 pic.twitter.com/3wVHcybLbt

One protester told WCBS 880's Mack Rosenberg that the group was marching west, crossing 39th Street, and as they approached 3rd Avenue, a black sedan that was traveling in the same direction as the group, rammed into the protesters.

"A black sedan, all black, accelerated through whoever was in front," protester Christian Resseguie said. "From what I could see she stepped on the gas. It didn't seem to be an accident. I jumped to the side, the person next to me wasn't so lucky."

Someone screamed “keep your hands on the wheel!” Cops descending on 39th btween 3rd and lex pic.twitter.com/aR0F5zWyEr

Police Officers Warn People Who Are In The Way They Will Be Arrested...NYPD Are Still Investigating The Scene. #NewYork #NYC pic.twitter.com/q4j0tlA86E

@protest_nyc a car just ran through a crowd of protestors on 39th & Lex. A lot of cops present at the scene, multiple ambulances and police helicopter. Police scanner is giving orders to arrest protestors. pic.twitter.com/vW4NwGG5JY

The driver of the vehicle remained on the scene. Video on social media purportedly showed the female driver being escorted in handcuffs into a police vehicle.

Several protesters have also been detained.

Police said at least six protesters were injured and taken to local hospital. The injuries don't appear to be life-threatening.

Traffic Advisory please avoid the area around 39th Street and 3rd Ave in Midtown, due to a vehicle accident, involving 6 protestors. The investigation is on going.