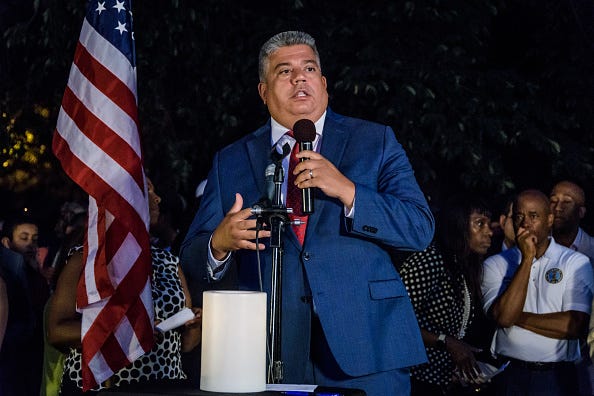 Investigators say Gonzalez’s 83-year-old mother’s neighbor in Cypress Hills was angry over the DA’s job performance and wanted him “off the block,” according to New York Daily News sources. Photo credit Erik McGregor/LightRocket via Getty Images
By Kyle Kandetzki

NEW YORK (WCBS 880) -- A neighbor of Brooklyn District Attorney Eric Gonzalez’s mom allegedly tried to burn down her home — but the DA stepped in to fend them off.

Investigators say Gonzalez’s 83-year-old mother’s neighbor in Cypress Hills was angry over the DA’s job performance and wanted him “off the block,” according to New York Daily News sources.

The suspect is reportedly Shashi Rattan, 30, who said he would keep on trying to run them off and cause damage after getting out of jail, according to the report.

Rattan reportedly set a mattress on fire in a driveway between the two homes Tuesday night. He then allegedly lit a lighter cube, broke a window of the home and threw it inside.

According to the report, Gonzalez was at his mom’s home at the time, and stopped the man from trying to climb inside the window. He ended up cutting his arm in the scramble.

“The DA was able to extinguish the incendiary device and prevented the intruder from entering the residence,” a spokesperson for Gonzalez told the Daily News. “He is grateful for the response by the NYPD and the FDNY and thankful that everyone who was present is safe. The case will now be handled by a special prosecutor.”

Rattan was arrested and charged with attempted murder, arson, attempted arson, burglary and criminal mischief. He was reportedly suspected of being high on methamphetamine at the time of the incident.